The latest Red Cross World Disasters Report is calling for a radical change in the way we manage and prepare for natural disasters. 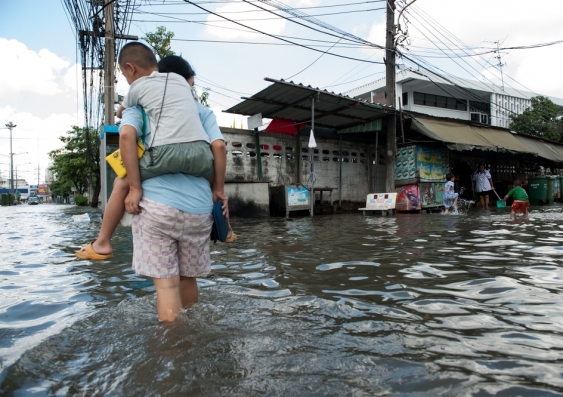 Heavy flooding from monsoon rain in Samutprakarn near Bangkok,Thailand in 2009. Photo: Shutterstock

The latest Red Cross World Disasters Report is calling for a radical change in the way we manage and prepare for natural disasters.

Natural disasters cost Australia at least $9 billion last year, according to the Australian Business Roundtable for Disaster Resilience and Safer Communities, with the cost forecast to double by 2030 and reach $33 billion per year by 2050.

“Investing in disaster resilience will save lives and money,” says Professor Sanderson, an international disaster risk-reduction expert. “Disasters killed 32,550 people last year, including 16 Australians, and affected 108 million people worldwide. Over the past 10 years, 1.9 billion people have been affected.”

Investing in disaster resilience will save lives and money. Disasters killed 32,550 people last year, including 16 Australians, and affected 108 million people worldwide. Over the past 10 years, 1.9 billion people have been affected.

“The need to change the way we deal with disasters is great: forced migration from conflict is at its highest since World War Two; the number and scale of disasters triggered by natural hazards are increasing, 2015 was the hottest year ever recorded, and the current aid sector which hasn’t changed for 75 years is struggling to cope.”

However, there is growing evidence that death and injury is reduced by investing in early warnings and preparing for disasters, with last year’s global death toll less than half of the average for the past 10 years.

“Building resilient communities who are capable of anticipating and reducing the impact of disaster before it strikes is critical to managing disaster risk-reduction,” Professor Sanderson said.

Australian Red Cross CEO Judy Slatyer said only one out of every eight dollars spent on disasters goes towards reducing risks.

“It’s time to build resilience by rebalancing the way we invest in aid and mitigate the affect of disasters. Preparing for floods, fires, cyclones and all disasters must become normal, like wearing a seat belt in a car.

“Our research and experience shows us that preparing well for disasters saves countless lives and helps people respond to disasters best and recover more quickly. It’s smart to reduce risk and invest in a safer future,” Ms Slatyer said.

Professor Sanderson said disasters should be approached in the same way as preventative healthcare.

“You stop the diseases from happening in the first place and that’s where disasters should sit. We can do a lot about this situation, the challenge is not too big, we just need to take it seriously.”