The UNSW academic’s 'Flow' uses the natural flow of water to convey the voices of Indigenous children around the world. 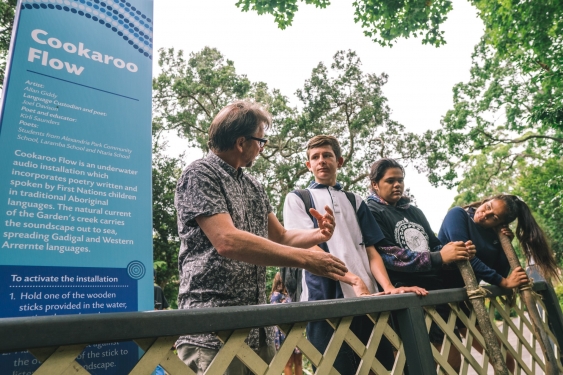 Artist Allan Giddy (left) with some of the Gadigal participants listening to their own voices. Photo: Tad Souden

A UNSW Art & Design academic and artist has received two grants to take his inventive Royal Botanic Garden water installation to other parts of NSW and Australia.

Allan Giddy’s Flow is a participatory site- and culture-responsive audio installation which uses the natural flow of water to convey the voices of Indigenous children reading their poetry in their first language.

“The children’s words, recorded and edited into a soundscape, are ‘released’ into the water to flow to the oceans,” the public artist and director of the Environmental Research Institute for Art (ERIA) at UNSW Art & Design says.

The Royal Botanic Garden version of the installation is called Cookaroo Flow – ‘Cookaroo’ being the Gadigal name for the land where the Botanic Garden Sydney is located.

Recently on display in the Garden, it is invisible to passers-by but can be accessed via a stick held with one end in the water, the other against the ear.

Poetry for the Botanic Garden installation was created by Aboriginal students from Sydney and the Northern Territory during workshops hosted by poetry creation organisation Red Room Poetry last November.

The funding from both Create NSW and the Australia Council for the Arts will enable Mr Giddy to exhibit the installation in regional NSW (Ballina, Menindee and Broken Hill), the ACT and Victoria.

During this period, he will work with school students to record poetry across multiple languages in urban, regional and possibly remote communities.

He will also take Flow to Aotearoa, New Zealand, in October, and hopes to exhibit it overseas, with the title of each iteration of the work incorporating the Indigenous name of the location.

“As the project progresses, the words that flow from children in Australia and around the world will, metaphorically, eventually meet and mix with each other, and with words from other First Cultures around Australia and overseas, in the interconnected oceans of our globe.

“This intermingling of First Words will symbolise both the strength and support that First Cultures draw from establishing relationships with each other globally, and the interdependent nature of all humanity,” Mr Giddy says.

The New Zealand-born sculptor is a pioneer in the use of sustainable energy systems and light in ‘time-based sculpture’ and has worked with alternative energy systems in his sculpture and installation art for more than 20 years.

Mr Giddy’s work has been shown at the Tate Modern, in Heidelberg and Rotterdam Town Halls, and numerous other international venues including Canada, Ireland and Finland. In recent years, he has completed a number of large public commissions in Australia, China, Ireland, Germany, the UK and New Zealand.

A past winner of NSW’s most prestigious travelling art scholarship (the NSW – now the Helen Lempriere – Travelling Art Scholarship), Mr Giddy regularly engages in industry and other partnerships to achieve his projects.

Deregulation: the road to recovery for business and government