Dogged, a new play at Griffin, seeks to tell both sides of the Australian story, exploring ideas of territory, guilt and culpability. 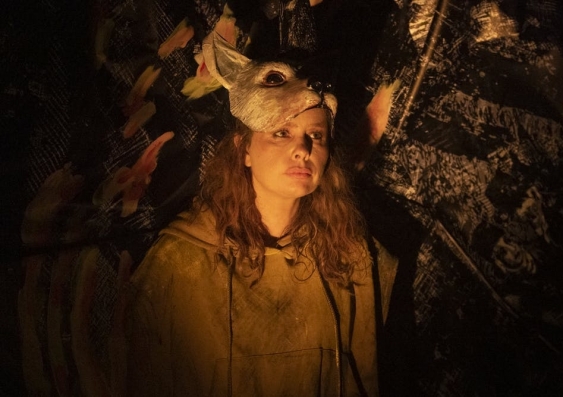 Dingo (Sandy Greenwood, a Gumbaynggirr, Dunghutti and Bundjalung actor) stands facing the audience, dressed in a muddied tracksuit with a dingo-like mask. Her opening speech signals concern; a longing for her lost pups.

We then meet Woman (Blazey Best). Woman is of good Scottish heritage, the daughter of homesteaders and sheep graziers. She is out hunting for wild dogs. Woman is preparing a kill, ripping out a souvenir from a bloodied carcass. Her companion is Dog (Anthony Yangoyan), eager for his own reward, a taste of the kill.

In the search for her lost pups, Dingo’s path eventually intersects with Woman and Dog. Why doesn’t Woman kill Dingo? Because she is overcome by the beauty of this ancient creature and invites the Dingo to share in their spoils. Together the three characters form an unusual trio. But around them lurks a malevolent presence: a pack of men on the hunt with their own dogs.

Dogged is unruly, both in its form and content. A feminist Wake in Fright, the play is a tale of two women: one dingo and one human.

But beware: this is not a love story.

Dogged is co-written by Catherine Ryan and Yorta Yorta/Gunaikurnai playwright Andrea James. James describes it as “a collaboration between First Nations and Settler artists”.

The play seeks to tell both sides of the Australian story, with ideas of territory, guilt and culpability. 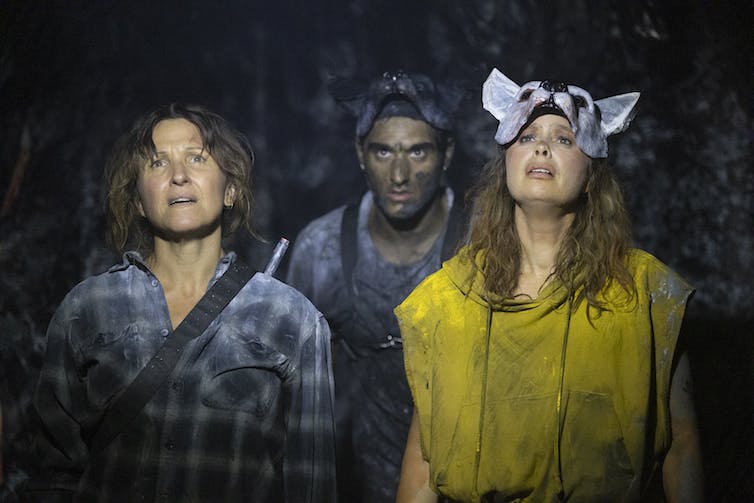 Dogged seeks to tell both sides of the Australian story. Photo: Griffin/Brett Boardman

The ceiling is coated in low hanging plastic bags, setting a gloomy tone. The grotto-like stage establishes the opening scene of a dingo’s lair.

The trio settle in and Woman falls asleep. But Dingo can’t stay. Not while her pups are out there somewhere alone. She runs off in search of them, Dog follows. Woman wakes to their absence, and chases screaming after them. Out there in the wild, they eventually all fall foul of the evil snares set by the surrounding male hunting expedition.

It does not end well.

Now just two, hiding in the bush, Woman and Dingo look for comfort. One searches for home: to her family, the farm, and her childhood memories. Dingo, on the other hand, only sees the Brabralung people who once lived where the Woman’s farm now sits.

Dingo tells Woman the tale of the violent history of the area and the injustices perpetrated by the her ancestors against the Brabralung people. Woman can hear her. She doesn’t know why, or how, but she listens. It is a story Woman doesn’t want to believe, or can’t. 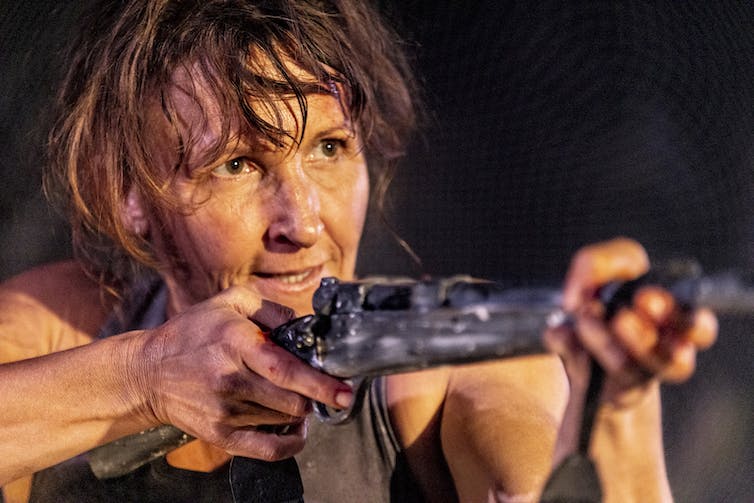 There is a violent history, and present, to the area. Photo: Griffin/Brett Boardman

In presenting two views of the one world, Dogged asks: will settler Australians ever see the world in the same way as the original inhabitants of the country do? Will our histories remain in the dark, hidden in a cave of ignorance, existing in the shadows? Like Dingo, we see only glimpses of her truth as she sneaks by, and we ask, was that real?

The Griffin production was developed in association with Force Majeure, one of Australia’s foremost dance theatre companies, which offers the animal performances a compelling physical presence. Kirk Page’s movement direction added depth to the corporal vocabularies of these dogs. In particular, some of the stronger canine postures reminded me of the Minimba Dingo dance.

Greenwood’s performance as Dingo is consistent and engaging throughout the performance, never wavering from of her hunger or wildness. Yangoyan gives us a polished embodied depiction of Woman’s faithful and loving companion Dog, and also plays a very frightening wild hunting dog in service of the male hunting pack. 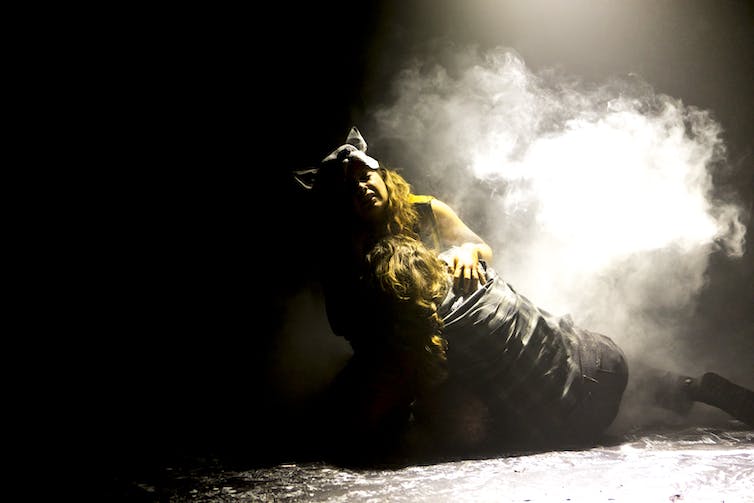 Outside the confines of modernity lurks the terrors of the past. Photo: Griffin/Brett Boardman

As Woman, Best seemed a bit erratic on opening night compared to the anchored performances of her canine counterparts who are given a voice in the play. Perhaps the equal weight given to the canine and human characters creates an uneasy role for Best to play.

Dogged reminds us when you venture outside of the comforts of the home, there you will encounter the beauty and truth of this land, its people and nature. Outside the confines of modernity lurk the terrors of the past.

From a distance you may see farms and swimming holes, but we see these sites differently.

Step into the wild if you dare.

Dogged is at Griffin Theatre Company until June 5.