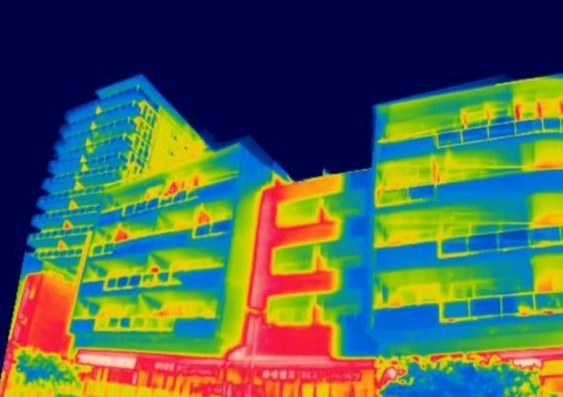 Some materials and surfaces generate much more heat (red areas) than others, as can be seen in this thermal image of Arncliffe Street in Wolli Creek, Sydney. Author provided.

Another hot and humid day in Sydney tomorrow with a maximum of 32 degrees in the city and 38 in the western suburbs.

How many times have we heard that on TV or radio weather reports?

But what would you think about the following forecast?

Temperatures in Wattle Street, Ultimo, will spike at 37 degrees around 10 am. Further up the hill at Point Street we can expect a top of 40 degrees shortly after 1 pm. Meanwhile, at the Observatory Hill weather station the 3pm maximum will struggle to pass 32 degrees.

We are unlikely ever to be able to forecast temperatures to such pinpoint accuracy. Still, the above exercise reflects the very real differences in temperature – and thermal comfort – at the scale of the individual street, indeed individual block, within our cities.

The driver of this surprising variability is the interaction between urban form and the heat energy of the sun. Building heights and materials, width and orientation of streets, and presence or absence of vegetation all affect local temperatures across the city. And if we drive to work, the heat from our vehicle’s engine and exhaust might be adding a degree or two.

Recent media reports have highlighted the bizarre weather patterns in Sydney over January, February and March 2016. Some reports have linked evidence of temperature extremes to urbanisation and the loss of shading and moisture that vegetation provides. This is known as the Urban Heat Island (UHI) effect.

A research collaboration between the UNSW Faculty of Built Environment and the Universities of South Australia and Melbourne has collected further evidence for the highly localised effects of building form, surface materials and street orientation on outdoor microclimate and pedestrian thermal comfort. The aim is to build a solid evidence base to inform design, planning and policy across Australian cities.

Meteorological data collected during the 2015-16 summer in Sydney reveals that air temperatures in the street “canyon” may vary by up to 5℃ from those the Bureau of Meteorology records at Observatory Hill.

Even more worrying are the surface temperatures measured on building facades. These may exceed 70℃ in the sun.

The vertical surfaces of multi-storey buildings account for much of the urban surface in contact with the surrounding air. Hotter surface temperatures elevate nearby air temperatures during the day.

Then, due to the thermal mass of typically dense and dark building materials, building facades continue to emit radiant heat well after sunset. This slows the cooling of local outdoor air temperature.

Our research sought to quantify the effects of typical urban form and materials on street microclimate and outdoor thermal comfort. We recorded building surface temperatures and ambient air temperatures using a thermal camera and mobile weather station in various locations in metropolitan Sydney.

Preliminary results suggest that business-as-usual architectural and urban design are exacerbating urban heat and creating hotter cities. This is alarming when considering the current and projected population of Australia’s major cities, particularly the growing proportion of vulnerable elderly.

On the same day, pedestrian-height air temperatures were recorded mid-morning in Wattle Street, Ultimo – 32.34℃ at 9am – and mid-afternoon in Point Street, Pyrmont – 36.34℃ around 3pm. These temperatures in Wattle and Point streets were 1.54℃ and 3.94℃ higher – or up to 12.2% greater – than the maximums at Observatory Hill.

Prior studies have reported a significant increase in mortality for every 1℃ rise in air temperatures above a mortality-temperature threshold (typically around 32℃ for Australian cities). This applies particularly for the population aged 65 years and older. Conversely, every degree of cooling has health and economic benefits for urban residents.

By taking into account the design drivers – including orientation and solar exposure, material albedo (reflectance) and emissivity, and views of opposite buildings and the sky – building designers can help cool our cities through “cool facades”.

We also calculated the effects of material properties on outdoor air temperatures and thermal comfort for January 14.

Footpath albedos (reflectance) in Wattle Street and Point Street ranged from 0.033 to 0.050 for rough weathered bitumen and smoother grey stone pavers respectively. Superficially the footpath materials appear to be the same colour. However, the rougher bitumen has a lower reflectance and therefore absorbs more solar radiation (and becomes hotter) than the smoother stone tile.

Prior studies have linked surface roughness to reflectance characteristics. The potentially contradictory effects of footpath surface reflectance on air temperatures and thermal comfort are evident in the grey globe thermometer (GGT) measurements.

The GGT measures only radiant heating to which humans are particularly sensitive. Cooler air temperatures are often correlated with higher albedo surfaces, but greater reflectance may increase the radiant load on pedestrians, increasing thermal discomfort.

The relative differences between ambient and GGT temperatures are 4.87℃ and 6.05℃. This greater GGT temperature difference confirms the additional radiant heating from the more reflective footpath surface and nearby hot facade.

The conclusion? Weather is not simply what the bureau tells us. As higher urban temperatures occur at the scale in which people actually live – the building, the street, the block – the implications for our health and well-being are profound.

By informing those involved in city planning, management and design about the implications of their design decisions on urban microclimate, this research provides the evidence base for a “cool” urban future.