In a world impacted by poverty and natural disasters, David Sanderson – the inaugural Judith Neilson Chair in Architecture – is teaching his students to build resilience, not skylines. 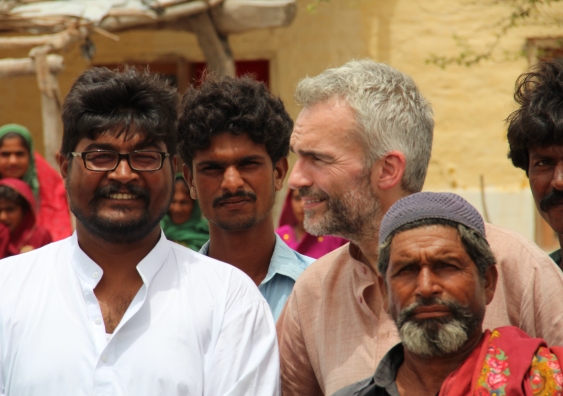 "We need to take the time to listen.” It’s a simple statement, but one Professor David Sanderson believes can alter the way post-disaster situations are managed.

As an international disaster risk-reduction expert who has spent 25 years working with aid agencies helping piece together communities torn apart by natural disasters, he is well-placed to comment.

“Aid organisations tend to focus on what’s missing, instead of the resources and capacities local communities already have. People aren’t helpless victims. They have dignity and they want to get on with their lives, and the best thing we can do is listen to them,” he says.

As UNSW’s inaugural Judith Neilson Chair in Architecture, UK-born Sanderson is committed to building resilient communities that have the capacity to “bounce back” from disaster by collectively rebuilding their homes and communities.It might seem a simple approach, but after years of observing inadequate aid and needless suffering he’s convinced it works. 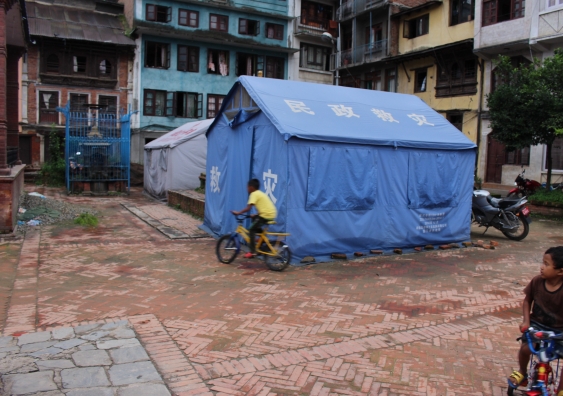 Quick-fix temporary housing in Nepal in the aftermath of the April 2015 earthquake. "After the TV cameras have packed up and gone that’s all people are left with." Photo: supplied.

“Bad international aid efforts tend to promote our ‘saviour mentality’ by flying in quick-fix temporary housing, but after the TV cameras have packed up and gone that’s all people are left with,” he says.

“It might sound counter-intuitive, but relief is the enemy of recovery. By focusing only on the short term, prospects for returning to normal are slowed down.”

He gives the example of the 2010 Haiti earthquake that floored the capital city Port-au-Prince, probably killing more than 200,000 people and leaving 1.5 million homeless.

Sanderson had what he calls his “aha moment” when he was working on a housing project in a squatters’ settlement in Mexico City in the early 1990s.

“Cities are growing by one million people per week and 30% of poorer countries’ populations are living in slums; by 2050 that could reach 60%. We need to learn how to house people in affordable, dignified ways.”

“We had enough money to build 30 houses in a settlement of two million people. It was a drop in the ocean,” he says. “Not only that, we were building the houses ourselves when the local, unemployed men and women could have been earning an income. It was patronising and pointless.

“Using local labour and local products would have been a far better solution.”

Ironically Sanderson’s desire to work with aid organisations came from his own “saviour mentality”. He spent much of his childhood caring for his sick mother who died when he was 12, followed by his father two years later.

“Loss at an early age. There you go,” he says. “It made me want to do something useful. When I finished my architecture studies I stumbled on the Masters of Development Practice at Oxford Brookes University. It seemed a good fit, even though I distinctly remember sticking up my hand and asking what NGO stood for,” he laughs.

Sanderson says we need to find a better way to deal with the new challenges the world is facing: increased natural disasters resulting from climate change, the explosion in the global movement of refugees, and the fact that more than 50% of the world’s population is now living in cities. 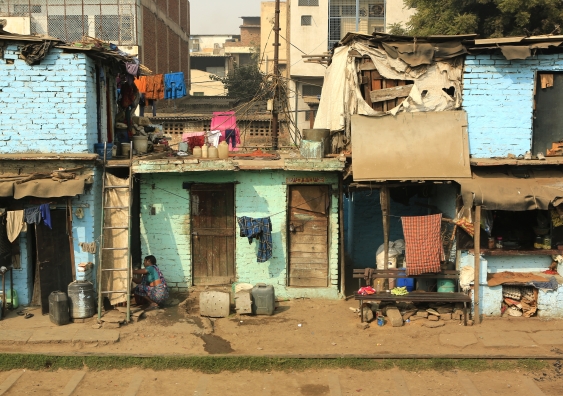 Urban migration is a huge issue. Cities are growing by one million people per week. Photo: Shutterstock.

He says the current aid system, which was developed in the 1950s, is “woefully inadequate”.

“The way forward is to increase resilience in communities by utilising local knowledge, products and labour to rebuild homes after disaster strikes. With the current aid system, people are left waiting for temporary shelters, which are often slow to arrive, expensive and inappropriate to local needs.”

Sanderson says “cash transfers” are one of the most researched aid interventions, and the most successful.

“It’s simple. You give people money and they decide how to spend it. They might prioritise rebuilding their home or they might use it to get medical help for a family member but they make the decision.

Having been trained as an architect, Sanderson’s main focus is shelter – how to keep people warm, dry and safe after disaster has struck.

But he says he had to spend some years realising that what mattered was the process as much as the product.

“I love architecture and it’s the most wonderful profession to be trained in. From my education it was the transferrable skills I took into the aid sector that counted: problem-solving, lateral thinking, a sense of space and form and creativity – not just designing buildings, but involving people in owning the decisions that were made.”

Sanderson says architects need to move beyond their traditional role of designing buildings in places of relative certainty to becoming facilitators of building processes that involve people in places of uncertainty and rapid change.

“Urban migration is a huge issue,” he says. “Cities are growing by one million people per week and 30% of poorer countries’ populations are living in slums; by 2050 that could reach 60%. We need to learn how to house people in affordable, dignified ways.” 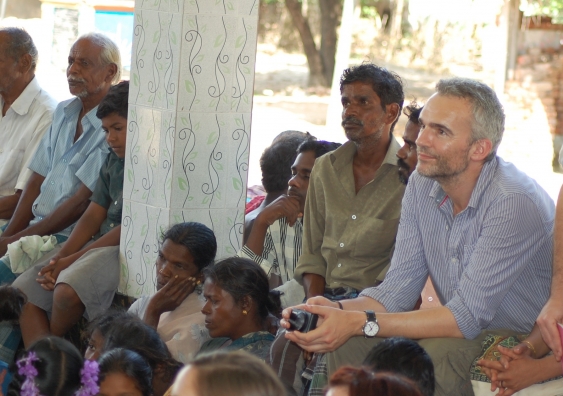 "We need to take the time to listen” ... a simple process that can alter the way post-disaster situations are managed. Photo:supplied

He describes a photo he once took of a young girl from a slum in India standing on a rubbish heap “beautifully dressed and smiling”.

“I had it on my desk for years – it reminded me of the incredible dignity and resourcefulness people have, even in the most horrific situations.”

He hopes the introduction of UNSW Built Environment’s Master of Architecture – Social Agency program, which he leads, will help students think through how to serve greater social needs.

“The question we’re asking is, ‘what does it take to be relevant as an architect in the next 20 or 30 years?’.”

When asked if he calls himself a humanitarian architect, Sanderson shakes his head. “It’s a funny phrase, I don’t like it. Most architects are humanitarians in terms of wanting to serve society. But good development and humanitarian work is about engaging people in the process and listening.”

“The building of houses is the easy bit,” he says, dismissing what he calls the “pretty, media-friendly”, temporary housing that is often built after disasters. “The knotty, difficult part is dealing with each country’s politics, economics, governance and corruption.”

He insists, however, that the situation isn’t all doom and gloom. He hopes this year’s inaugural World Humanitarian Summit and the Venice Architecture Biennale, Reporting from the Front, will be game-changers in the sector.

“I look forward to the day when we all know how to listen, and we judge good architecture on what it does for marginalised people.”