Dr Lindsay Kelley has received a grant to study three common biscuits and their links to war. 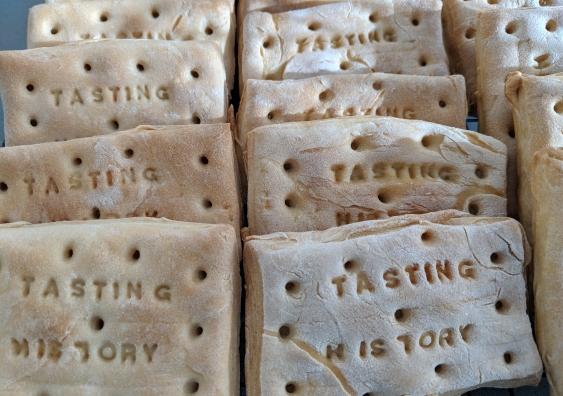 A UNSW Art & Design lecturer is researching the military histories behind some common biscuits. Dr Lindsay Kelley has received an Australian Research Council (ARC) grant for her study ‘Tasting History: Biscuits, Culture, and National Identity’. The three-year grant will see the lecturer uncover the historical and military connections between the Anzac biscuit, hard tack and fry bread.

“The Anzac biscuit is an iconic Australian food with a really specific yet contested connection to World War One,” she says. “Other people have done a lot of research into the origin of that recipe and how it was and wasn’t part of what troops actually ate when they were deployed.

“Then there’s the myth of the Anzac biscuit and the way that it’s protected today, that you can’t use the words ‘Anzac biscuit’ unless what you’re selling conforms to a specific idea and recipe. I think the regulation around those biscuits is very interesting.”

Hard tack biscuits are survival rations that continue to be eaten by soldiers and preppers – “people who are stockpiling for the end of the world”.

“Hard tack biscuits are very simple, very hard flour, salt and water biscuits that last forever,” she says. “I have seen examples in museum collections that are from the 19th century. I think the oldest is from 1851, but they still look good; you could still eat one. So that’s a deeper history– those are origin points for a lot of the biscuits that we eat today.”

Dr Kelley is also researching fry bread made by the Diné or Navajo people of the US Southwest.

“They created fry bread out of military rations after they were forcibly removed from their land and placed in detention many miles from home in a literal ‘food desert’. It’s become a really popular food across many Native nations and you can find it all over the US Southwest, at restaurants and roadside stands and on the Pow Wow circuit.”

The lecturer says the three biscuits are connected materially – “they’re all made of white flour, they are wheat-based biscuits” – and are all very popular. The third connection is that the biscuits have all originated or are connected with active war.

“My question is, why do we not consciously register the ways we are eating military rations or even re-enacting war scenarios through our food on a daily basis?” she says.

Dr Kelley’s art practice is in the kitchen and explores how the experience of eating changes when technologies (like preservatives) are being eaten. She says she was inspired to start researching food when she was sending care packages to her cousin, who was a pilot in the US Air Force.

“I would send him food and we would talk about all the different ways it spoiled,” she says. “I started thinking about how the care packages I was sending were like bio-weapons. I kept trying to make different things to see what would last longer.”

She became interested in Anzac biscuits when she arrived in Australia in 2013.

“The process of making something long-lasting that could be shipped over a long period of time and stay good was very much the same thing I was doing when I started baking for my cousin,” she says.

“There’s something cultural happening here, where I can actually get people to talk about this phenomenon of creating stuff for care packages. These foods signal a transnational global war problem. I want to know how we can use our sense of taste to think about the everyday conditions of war that people, who are both baking and eating these biscuits, are living in.”

The first year of her research grant will be spent getting people to talk about the biscuits and eating them together.

Dr Kelley has also met with Australian War Memorial curator Dianne Rutherford who has made many historic Anzac biscuit recipes “that look and taste nothing like what we think of Anzac biscuits today”.

Over the next six months, Dr Kelley will be conducting a series of workshops on the biscuits, starting with the Cementa Contemporary Art Festival at Kandos, in the Central Tablelands in November. The festival is being curated by UNSW National Institute for Experimental Arts (NIEA) researcher Bec Dean.

“I’ve collaborated with the Kandos branch of the Country Women’s Association to create a series of workshops where we make Anzac biscuits. The idea is that by cooking and eating something and talking about it together, everyone can tell some stories about what the taste of these foods means to them.”

Another workshop on hard tack biscuits will be held at the American Studies Association Conference in Hawaii in early November.

“That will be another tasting workshop where we look at the Diamond Bakery Pilot Cracker that is still eaten in Hawaii and is really celebrated – everyone loves it. But its origin is with a maritime settler culture: both missionaries and whaling vessels brought this food to Hawaii.”

Next year, Dr Kelley will co-host a hard tack workshop in Armidale, NSW, with Dr Jennifer Mae Hamilton and the Community Weathering Station.

“Armidale moved into Level 5 water restrictions on 1 October. Being a survival food, hard tack is a great thing to talk about when people are thinking about survival.”

She says researchers can learn a lot by cooking foods with people.

“We make a lot of knowledge in the kitchen. It’s not just a utilitarian place, it’s a philosophically rich place where we learn about who we are and who our families are. We both come into conflict and embrace collectivity in the kitchen. It’s a really fertile space to work in.”

Dr Lindsay Kelley will host interactive workshops at Cementa Contemporary Arts Festival at Kandos. You can register for November 22 or 23.