Opinion Cities, just not as we know them: get ready for NSW's Six Cities Region

A planning strategy for Australia’s first multi-city region, home to nearly one in four Australians, is being developed. So what’s the thinking behind creating an integrated network of six cities? 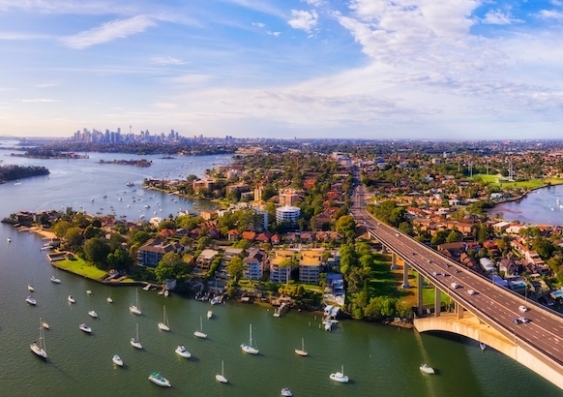 A multi-city region, also known as a mega-region, establishes an integrated network of globally and locally connected cities. Photo: Shutterstock. 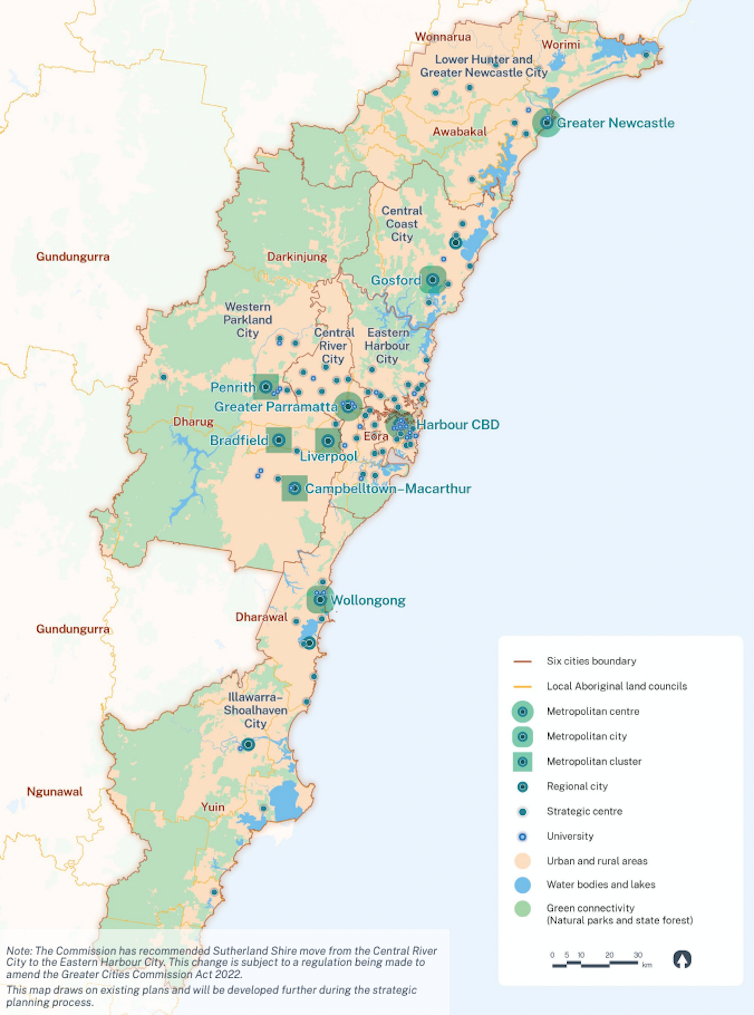 The region is home to around 6 million people. It’s expected to reach 8 million in the next two decades.

The Six Cities concept has evolved from the 2018 Greater Sydney plan, A Metropolis of Three Cities. Introduced by the then Greater Sydney Commission, the plan established the Western Parkland City, Central River City and the Eastern Harbour City. The priority then was to ensure housing, jobs, infrastructure and services were all within a 30-minute trip for more people.

Now, as the Greater Cities Commission, we are developing a response to the reality that cities can either compound or address some of society’s biggest challenges: inequality, congestion, pollution and social exclusion.

Released today, a research report by the Greater Cities Commission and The Business of Cities, entitled Greater Cities: The Global Experience of Planning, Preparing and Promoting the Multi-City Region, notes:

“We are in the middle of the century of cities – the hundred years of accelerated urbanisation from 1980 to 2080 that is creating a majority-urban planet.”

And the proportion of the world’s people who live in cities continues to increase. The United Nations predicts cities will house 6.9 billion people by 2050. Australia leads the way in urbanisation – close to 90% of us live in cities.

As pressures on urban centres rise, we must reimagine how we live, work and connect in our cities.

What are the challenges and opportunities?

How do multi-city regions help us with ongoing housing challenges, cost-of-living increases and development constraints in central cities? Essentially, they do so by opening up opportunities across more connected centres. This distributes wealth across a larger region and provides more equitable access to healthcare, education and training facilities.

Through co-ordinated planning across all levels of government, multi-city regions also offer an opportunity to tackle key environmental challenges. These include climate change, urban heat and the effective roll-out of decarbonisation initiatives.

In the case of NSW, the network of six cities also responds to the pressures of rapid urban growth. It does so by redistributing this growth across a larger area and fuelling development in smaller or lower-demand areas.

What does the Six Cities Region mean in practice?

In establishing the Six Cities Region, we join a global vanguard of up to 20 multi-city regions, which organise and co-ordinate their activities in different ways. What the Six Cities Region does share with other regions, however, is a need to manage high population growth along with huge demand for housing and lifestyle choices. 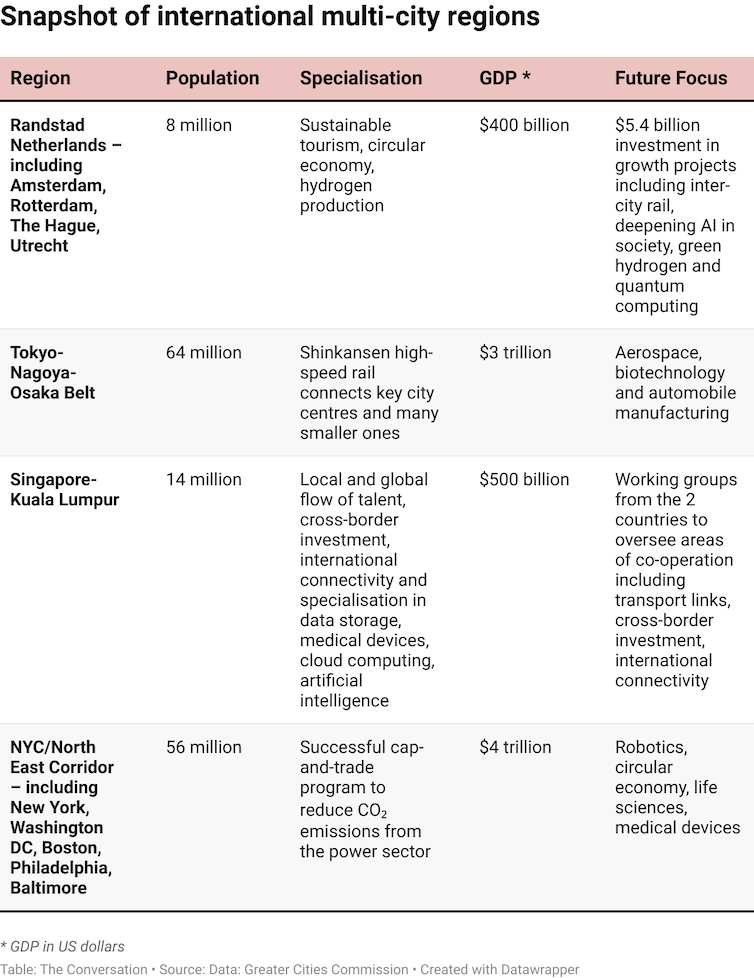 City regions also have to stay ahead of the curve in response to the disruptions of COVID and climate change. At the same time, they must balance and enhance opportunities for business, investment, culture, education and decision-making.

While we focus on the big-picture model in this article, it’s worth noting the Commission’s responsibilities are complex. It is setting and monitoring housing targets for each of the 43 local government areas within the six cities. The Commission must also identify how to achieve more diverse and affordable housing. 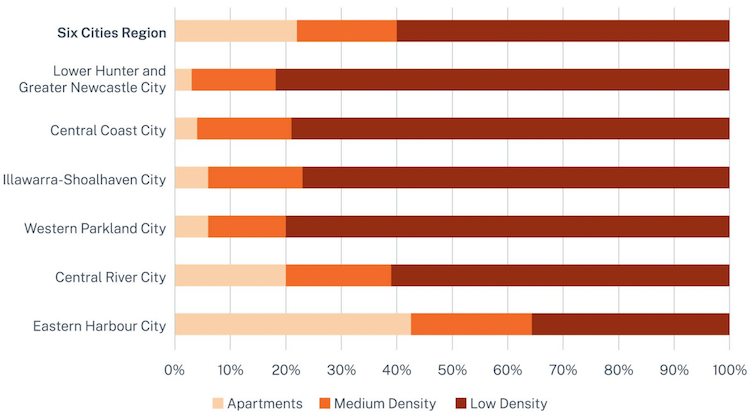 Work is under way to finalise 5, 10 and 20-year housing targets. These will be released in the region plan towards the end of 2023.

Balancing the global with the local

The challenge and the opportunity lie in delivering globalised localism. This means opening up these six cities to more international growth and opportunities, while fiercely protecting their natural assets.

The region also has the exceptional asset of 65,000 years of continuous culture. We have the opportunity to embed the wisdom and aspirations of First Nations peoples in caring for Country and people, and knowledge sharing.

If successful, the equity and resilience of the region will be second to none. Everyone will have the opportunity to work in great jobs close to home. They will be able to live in vibrant, well-serviced neighbourhoods with diverse and affordable housing options.

Harnessing our enviable assets in a connected way will result in opportunities and benefits for everyone in the Six Cities Region. As the report explains:

“The Six Cities Region has many significant advantages over other mega-regions. These could, with the right shaping interventions, help the region become one of the most advanced and forward-thinking multi-city regions in the world over the next decade.”