The Wynne Prize is a strange mash-up of media and concept, with a dearth of female winners, writes Prudence Gibson. 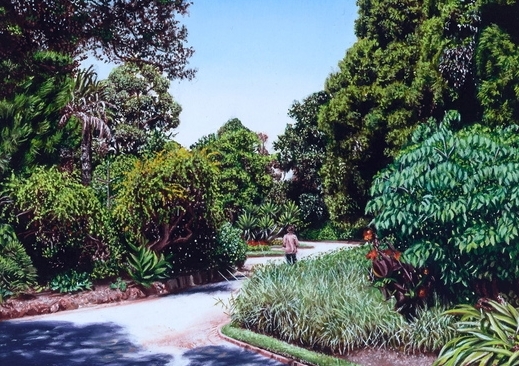 OPINION: Today, Natasha Bieniek won the 2015 AU$50,000 Wynne Prize for her work, Biophilia (main image). This is happy news, considering the prize has been hounded by a history of gender inequality. Her work is a miniature painting, smaller than a Polaroid photo. It represents the artist’s love of the minute biological details of nature.

The nexus of science and art is a rapidly growing area of contemporary art and, as such, the winning work reflects a major BioArt trend around the world. It addresses an important theme in contemporary life: how do humans relate to nature in an increasingly digitised world.

Since 1897, the Art Gallery of NSW’s Wynne Prize has been awarded for “the best landscape painting of Australian scenery in oils or watercolours or for the best example of figure sculpture by Australian artists”.

While this prize has consistently been a strange mash-up of media (painting and sculpture) and concept (landscape and figuration), the hybrid structure of the prize is the least of its worries. So what are the main ones?

The first is that, since 1900, 105 men have won the prize, as opposed to only 10 women (including Bieniek this year). Is that because women can’t understand the idea of nature? Is it because women are not muscular enough to be sculptors? The poor representation of women artists in this category is more bewildering than anything. The gender politics need to be redressed, as they have been this year, at least, with Bieniek’s work.

And if we look at the 2015 short-listed Wynne entries, there were three major women artists whose works were equally deserving of the main prize.

First there was Aida Tomescu’s entry, Bribie (below).

In 2001, Tomescu won the Wynne, and deservedly so. She paints hedonistic landscape experiences. Heavy applications of oil are palette-knifed or brushed onto the surface, exposing the layers of earthy sediment or the currents of seawater.

Her paint is sucking mud, salty claypan or icy aquamarine water. Her work gives us a sensuous and material experience of the environment. They are stories already inscribed on the land, in the marks left by crabs at night in the sand, or in the scribbly bark of the gum tree.

Tomescu’s paintings are rakings in the soil, stories that are dug up along with the minerals in the earth, they are stories that pile up like hills of landfill or are buried in graveyards. These are the complex stories, already there on the earth.

Jo Bertini was also shortlised this year, for Mound Spring (below).

Bertini’s paintings are the result of expedition trips to isolated regions of the Australian desert alongside biologists, botanists and environmental scientists from universities and museums around the world.

She heads off with satellite phone and a string of camels and paints the experience of isolation and loneliness that is the Australian interior. She comes home afterwards, muscled, her skin tanned and a new knowledge in her eye (a wildness) that is slightly frightening.

When she returns from her trips she talks about the bounty of the desert, its benevolence. This cornucopia is so contrary to the way we have understood the isolated interior, as painted by historical male counterparts such as Russell Drysdale or Sidney Nolan.

There is sometimes a bleak quality to Bertini’s work but it is both emotional and scientific, both empathic and measured. It is fiercely female.

Her work this year, Mound Spring (as pictured above), is a vertiginous desert edifice with a sole tree, stuck on its cliff edge. The tree is a forlorn and lonely reminder of the history of landscape painting, where an identifiable trope (a fallen tree, a tree stump or a view through trees) needs to be abandoned.

Nature, now, is a devastated, compromised and annihilated concept.

The third strong female contender for the Wynne Prize this year was Kate Shaw, with her work Anthropocene (below).

Shaw uses acrylic and resin to create reflective and mesmerising prisms of colour. This is landscape as kaleidoscope of fluorescent pinks. Colours bleed into one another on the painting surface in a swoon of childhood memories of the entire collection of Derwent coloured pencils.

But Shaw’s work is not merely a nostalgic tour of “colour-love”. Her work is perversely environmental. Perverse, because she creates an artificial world. Her luminous reds, lurid greens, high-vis yellow and patchwork pinks are man-made. Her trees leak into their background, her ice scenes are melting in a critical climate change epoch.

The title of her shortlisted work, Anthropocene, refers to a theme in philosophy, art and science in recent times. It is the period of time, since Industrialisation, as measured by the top geological layer of the earth.

There, in the soil, littered with plastic refuse and a century’s worth of discarded machinery and an equivalent layer of harmful carbon, is the story of mankind’s effect on the landscape.

The painting is a view through the cave-like mouth of deep time. The earth is alive. It is monstrous and the gaping lips of death look out onto an idyllic view or scene that may not last for as long as we hope.

So what do these powerful examples of landscape painting, by women, tell us?

They tell us to stop overlooking women who paint vast scenes that are a challenge in different ways. These artists deserve closer attention.

The second problem with the Wynne Prize is that it always looks truly terrible, in situ.

A bit of figure sculpture (which the Trustees clearly have trouble defining), a bit of landscape painting (and the parameters are becoming increasingly unbounded each year), and the result is no less than a mess.

From its inception until 1928, the prize was not exhibited at the Art Gallery of NSW. Instead, the winners were selected by the gallery Trustees, who travelled to local exhibitions and studios and selected the winner, personally. Perhaps this is the key to a re-invigoration of the Wynne Prize. Let’s not dump them all together like a horrifying kitchen table mess of spilt milk, soggy cornflakes and burnt toast.

Instead, let’s return to the original process of Wynne-awarding. Send the trustees out to select a winner and reward that work, alone. Hang it in the AGNSW, alone.

What gladdens the heart, this year, is that all four artists mentioned here (not least the wonderful winning work) managed to harness a love for painting and an equal love for the environment.

Prudence Gibson is an art writer and tutor at UNSW.

Lighting spotfires under a palace of colonial power