Opinion Disaster survivors aren't helpless victims: relief can be the enemy of recovery

Providing temporary housing after the Fiji cyclone might indulge our ‘saviour mentality’ but the long-term solution lies in mobilising communities to rebuild their own homes, argues David Sanderson. 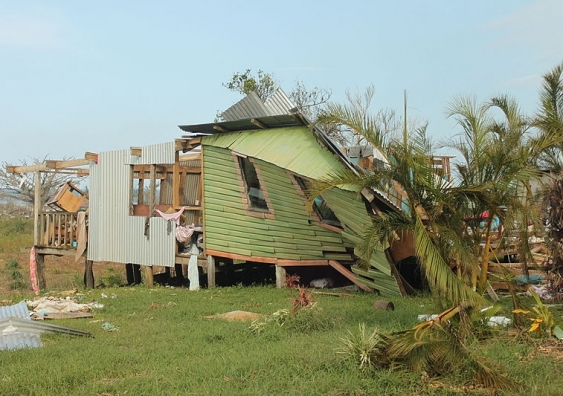 OPINION: ‘Relief is the enemy of recovery’ is a truism often cited after disasters.

In other words, by focusing aid efforts only on the short term and encouraging a ‘saviour mentality,’ prospects for returning to normal are slowed down.

In Fiji it is now a week since Cyclone Winston tore through the country, killing 43 people and leaving over 56,000 in temporary shelters.

The government was quick to respond by declaring a 30-day State of Emergency. In that time, and in the months to follow, it is hoped significant progress will be made on the path to recovery.

However, there is a risk that some of these aid efforts in Fiji will further promote our ‘saviour mentality,’ and unwittingly prolong suffering by opting for a quick-fix.

This might take the form of needs assessments that assume people are incapable of mobilising their own responses and encourage communities to rely on the arrival of aid. And when aid doesn’t come, which is sometimes the case, communities are left waiting rather than getting on with leading their own recovery. This happened after Typhoon Haiyan struck the Philippines in 2013 and after last year’s earthquakes in Nepal. And, several years after the 2010 Haiti earthquake, thousands of people are still living in tents.

It can be difficult to balance providing help, which can encourage dependency, with enabling people to recover on their own terms. Surprisingly, one of the best ways to help people help themselves is to simply give them money. ‘Cash transfers’, as they are known, are cheap to administer, help mobilise people and boost local markets and economies.

Aid agencies know that such cash programming works well when markets are in place. But where the sector still struggles is shelter.

Temporary shelters are often slow to arrive and inappropriate to local needs. Sometimes they are just plain weird: the post disaster shelter landscape is littered with strangely-shaped structures made of odd materials, dreamt up by those who seem to think it is okay to experiment on vulnerable people. Domes are a favourite, and few disasters survive their appearance. The village of New Ngelepen that was built in Yogyakarta after the 2006 earthquake is better known as Teletubbies Village, due to the houses resembling the fictional setting of the UK children’s TV show. The shelters have no connection with existing traditions and culture.

Some prefabricated temporary shelters, usually designed to last only three to five years, can also be expensive, wasting precious aid money in stopgap measures. These funds are better invested in reconstruction driven by local people. Natural disasters affect poorer communities most, and making scarce funds available to these communities after disaster boosts recovery.

For post-disaster shelter to be effective it needs to have the long-term in mind, as well as meeting immediate need. It is low cost, allowing more shelter to reach more people. It involves local builders, which provides employment, and utilises local materials. Above all, effective shelter projects put those affected in the centre of the process - people themselves decide what they want and how they will use it.

The word that springs to mind is dignity: people are not ‘helpless victims’, as some aid responses would have it, but rather survivors who design their own communities.

Professor David Sanderson is UNSW Built Environment's inaugural Judith Neilson Chair in Architecture. He has worked with international aid agencies in development and disaster risk reduction for the past 25 years including with CARE International UK as Head of Policy and as Regional Manager for Southern and West Africa.

This opinion piece was first published in the The Sydney Morning Herald.

Rethinking the critical role of architects in post disaster situations