Opinion Election humour 2022: can the major parties win votes with a funny marmot or a joke about Star Wars?

Humour is now part of the modern election campaign. Facebook and TikTok have become joke battlegrounds. 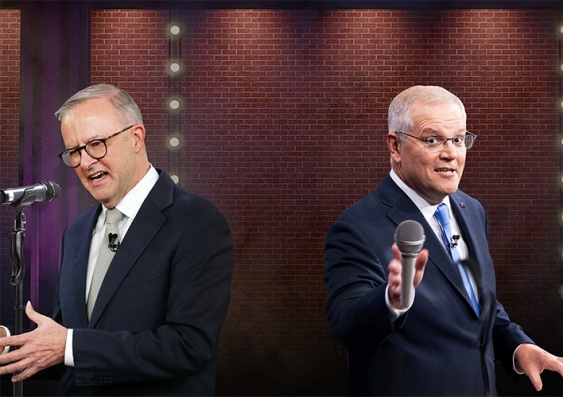 T"target="_blank">he 2022 election campaign seems longer than Napoleon’s retreat from Moscow. And there is still ten days to go. But that does not mean the whole thing is without lighter moments.

Humour is an important and inescapable tool of persuasion used by politicians, parties and their allies during election campaigns.

Neither Prime Minister Scott Morrison or Labor leader Anthony Albanese are renowned as great wits, in contrast to Gough Whitlam and other former prime ministers who thrived in more freewheeling times.

Instead, humour is now a campaign function that can be supplied by party or non-party specialists – not necessarily comedy specialists – as part of heavily managed campaigns.

The power of a joke

Humour is a funny thing because of its many ways, receptions and uses. It is not always light-hearted and inoffensive, as fans of Ricky Gervais or Chris Rock know.

Many of us think celebrities deserve such ridicule, just as we think politicians deserve mockery laced with malice or schadenfreude. Our tradition of stereotyping politicians as corrupt began 300 years ago with satirists such as Jonathan Swift, the writer of Gulliver’s Travels.

Humour is not always subversive in politics, although comedians like Australia’s Charlie Pickering think their work speaks “truth to power”. After all, it can be used to reinforce community values or discipline those who step outside social conventions, for instance in the struggle against racism.

Humour as a campaign tool

Humour can also be a positive campaign tool, enhancing the credibility of politicians, even if by association.

Independent candidate Zoe Daniel appeared in a session of the recent Melbourne Comedy Festival with advocate Grace Tame and comedian and anti-fossil fuel campaigner Dan Ilic. Apart from looking like a good sport she also benefited from their mockery of her Liberal opponent in Goldstein, Tim Wilson, and Morrison. 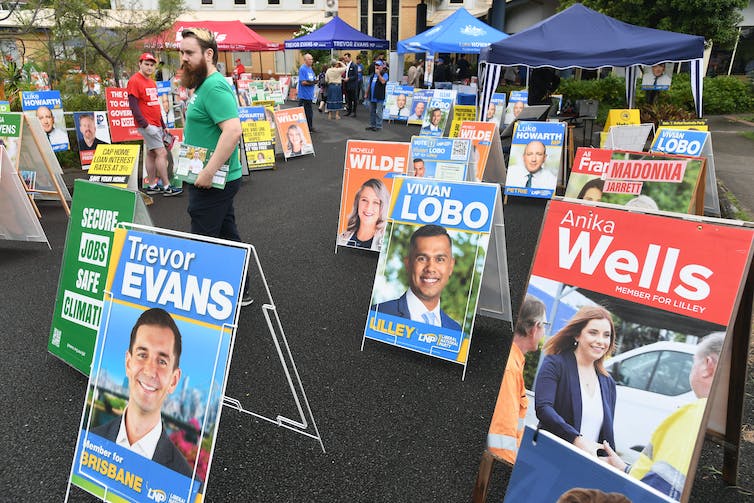 With the start of early voting, the scramble for votes has intensified. Darren England/AAP

Clearly, humour can be used by a party as a negative tool when getting an audience to laugh at an opponent and diminish their reputation.

To these ends, memes have been important tools since the 2016 federal election, repurposing culture with ironic humour in order to reach disengaged voters.

This continued in 2019 with the Liberals aiming to dominate the digital conflict with lots of posts. However, this means quantity can come at the expense of humorous quality.

This time, the Liberals seem to replaying their success of three years ago with humour, focusing their efforts on Facebook (aimed at all ages) and, to a lesser extent, Instagram but not Twitter.

Since the start of the election campaign on April 10, the Liberals have had a clear lead in Facebook numbers. The federal Liberals have 1.1 million followers and had 1.69 million interactions and 1.96 million video views compared to Labor with 509,000, 1.21 million and 1.21 million.

But the Liberals have declined from a big start and Labor has caught up on average number of daily posts and getting better interaction rates.

Liberal humour hasn’t always garnered great success because of the strategy of quantity over quality. This includes a mock poster for “a new series by Flip-flop-flix”.

According to the Crowdtangle research tool, it only got 1.3 times less interactions than the average comparable Liberal post. Similar under-performing videos include the “Chronicles of Marles” at -1.7 times and a Star Wars themed post at -3.2 times with only 1,800 views.

Some Liberal videos have also done modestly well. One that edited Albanese into an appearance before Judge Judy received about 23,500 views. This falls short of their standard “serious” posts criticising Albanese, such as two focusing on his failure to remember the unemployment rate which got 160,000 and 80,000 views, according to Crowdtangle.

Labor has been focusing its efforts more on Instagram and on TikTok, where we know younger voters spend most of their time. Only 23% of under 35s voted for the Coalition in 2019, so this is an important demographic for the ALP.

Labor has been using its channel to poke fun at Morrison’s “raw” chicken curry and has made use of well-known marmot footage to joke about the absence of disgraced education minister Alan Tudge during the campaign.

One Labor post with about 157,000 views depicts Morrison as a brute from the video game Halo bashing young people and making housing unaffordable, playing on their fears about the issue.

Another Labor TikTok with about 23,000 views splices a blinking Morrison replying, “It’s not my job” to Princess Leia from Star Wars begging for help.

Non-party players are also helping to fight the election with humour.

Controversial political commentator and comedian Jordan Shanks (also known as Friendlyjordies) is not an ALP contractor but is effectively a Labor party satirist in the same fashion that Swift was for the Tories in the 18th century. Shanks openly advocates for Labor and has the advantage of being more risque than the party can be. He regularly gets between 150,000 and 500,000 views on Youtube and on Tiktok.

Similarly, satirical website Juice Media usually excoriates the “shit-f***ery” of the Coalition in “honest government ads”. The latest instalment has so far earned more than 500,000 views and supports the “not-shit” independents.

What does this mean?

Labor’s internal review of the 2019 election found the party had dropped behind the Coalition when it came to digital strategy.

But this time, the record seems more mixed when it comes to humour. Of course, we await post-election analysis, but it is clear both parties view humour as a serious way of undermining their opponents.

Yet, there is no assurance that a catchy meme or a clever pop culture reference will convert voters to either party’s policies or leaders. It is possible they can be preaching to the converted, which is fine for bolstering political identity but not for boosting votes among the uncommitted.

The cost of party bickering