Esme Timbery’s influence on art and culture to be an inspiration for generations to come at UNSW Creative Practice Lab. 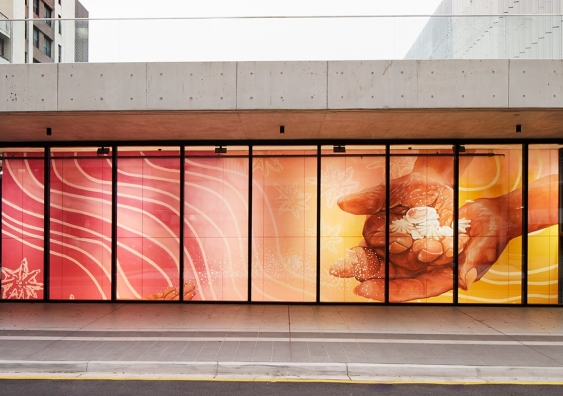 The Esme Timbery Creative Practice Lab burst into colour with a new mural in honour of the Bidjigal Elder and artist.

Esme Timbery is walking along the beach in Kurnell with her mother and aunties nearby. They’d just got off the ferry from La Perouse, a family ritual. Ahead of them, shells scatter across the sand in a jagged glitter of colour.

Aunty Esme crouches down and inspects a shell resting in the sand. Satisfied, she places the shell into her bag and continues along the beach.

It’s a family outing. Her relatives are scanning the beach, some across the sand, others on the rocks. She then sees it: a blue shell, glistening, stuck on a dark rock ahead.

“The beautiful shells, those blue ones, were often stuck on the rocks – and you’d have to ply them off,” Aunty Esme says now, many years later.

As she speaks about those memories – of walking along beaches near La Perouse and the south coast, selecting and collecting shells with her family – Aunty Esme smiles. Because it is on the coast, with shells in her hands, that her art is born.

“Every beach, each season, and depending on the tide,” she says, “brings you different shells.” In this way, she says, shellwork just comes to you; you don’t really know what the result is going to be until it’s there in front of you.

The 89-year-old Bidjigal artist’s vibrant works, including the iconic, shelled Sydney Harbour Bridge pieces, have been celebrated across Australia. Her work – of decorative shellwork items – can be found in collections at art galleries across the nation, including the National Gallery of Australia.

This artistic legacy, grounded by an intergenerational passing of knowledge and creativity, burst into life at UNSW this month with the unveiling of a new two-story mural.

Titled In her hands, the mural brings a fresh wave of colour to the Esme Timbery Creative Practice Lab (ETCPL). Opening late last year, this is the first building at UNSW to be named after an Aboriginal woman, after an in-depth consultation with the local La Perouse community.

A story told through generations

“Our piece, In her hands, celebrates the passing of Indigenous cultural practices,” the artists say, “from Bidjigal Elder Esme Timbery to five living generations of her family.”

“Through her hands, Esme shares the magic of shellwork with the women in her family, represented by the young hands of Esme’s great-great-granddaughter, Jiyah-lee Bell.

“It signifies the importance of transferring culture through physical and oral transmission to sustain intergenerational knowledge.” 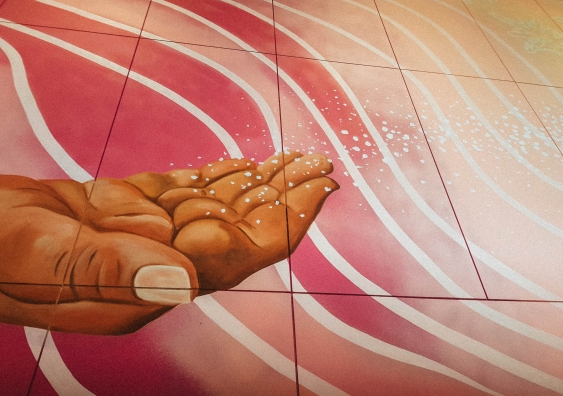 The mural also has a reference to the La Perouse headlands and sandstone, they say, with rhythmic topographical lines representing the location of the Timbery family’s rich cultural traditions.

It’s “a powerful reminder that the Kensington campus is located on Bidjigal land”.

This cultural tradition of shellwork art has spanned generations of women from the La Perouse Aboriginal community. ‘Queen’ Emma Timbery, Aunty Esme’s great grandmother and important community leader, had created and sold shellwork her whole life, with her art being exhibited in London in 1910.

For Aunty Esme and her sister, Rose Timbery, this tradition began in their youth as they walked along the beaches near La Perouse and along the south coast of New South Wales. Where they’d select and sort the shells by colour, size and character – inspecting each one in the late afternoon sun. Where the knowledge from their mothers was passed on.

By that young age, Aunty Esme had already made her first set of decorative shellwork brooches. By the 1950’s she began selling work with her sister at the markets.

“Aunty Esme is a part of a long tradition, and one that she continues to pass on to her family,” Lizzy Mayers says.

“It’s so great seeing Aboriginal culture, and specifically a local Aboriginal woman and her lifelong work, be recognised in a substantial way.”

More than just a name

The new mural – the first in an ongoing series – will also be complemented with a permanent display that honours Aunty Esme and "tells her story".

“The mural project will see new wall art presented every 3 to 5 years. It is a giant canvas, where we can feature up-and-coming artists in a significant and meaningful way,” says Su Goldfish, manager of the Esme Timbery Creative Practice Lab. 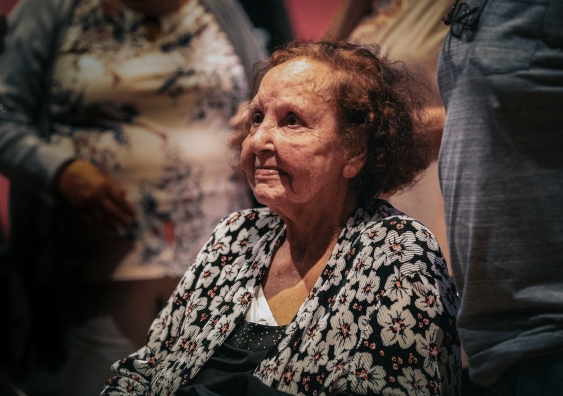 Esme Timbery at the opening of the new Creative Practice Lab at UNSW.

“For the first commission, we have honoured Aunty Esme; as the namesake of our building, we could have it no other way. And we also wanted to feature young Aboriginal and Torres Strait Islander artists and alumni.

“But as it’s a temporary piece, we will also have a permanent display to mark Aunty Esme’s art and her influence in the region and the art world.”

The permanent display, which will be revealed later this year, will house some iconic shellwork created especially for the Creative Practice Lab.

The pieces, developed by her daughter Marilyn Russell, are another continuation of the Timbery tradition of shellwork; one that will inspire students from across the world for generations to come.

“As part of the School of the Arts & Media we support students across a range of disciplines. It’ll be fantastic to not just have a name attached to a building but to be a place where Esme Timbery’s art and her creative legacy can thrive and inspire all of us,” Ms Goldfish says. 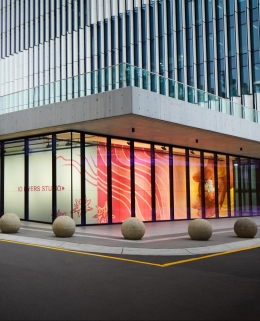 It’s with this continual presence of Aunty Esme and her work seen at the Creative Practice Lab, Ms Goldfish says, that a unique environment for students and staff will be created.

An environment where they can innovate, research and be creative; where they can push the boundaries of art and expression, yet also be grounded by a sense of place – a recognition that culture, art and music have been a significant part of this land for thousands of years.

Further along the coast, in La Perouse and along the beaches of New South Wales – hands cradling shells, the waves crashing and tumbling in the distance – a practice that has moved through the hearts of generations will continue to thrive.

A story of mothers, daughters, Elders and grandmothers will persist. The slow exchange of knowledge, older than time itself – a tradition of art and culture – will continue to be passed on.

A legacy unlike any other, coming to life.