Inscribed with the words “Barangaroo Masterplan” and topped with a gilt-bronze model of James Packer’s proposed $2 billion casino, Barangaroo Doppelganger is a political statement on wheels that asks: ‘How did this happen, and how does it implicate us all? 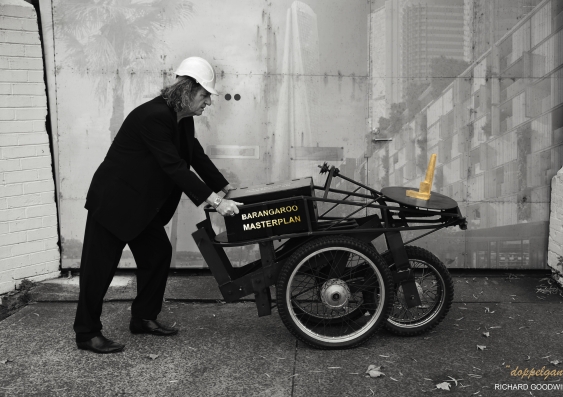 For the next year, artist Richard Goodwin will push a cumbersome trolley from Walsh Bay to Hyde Park retracing the footsteps of Joseph Cindric, Sydney’s homeless “trolley man” who died more than 20 years ago.

Cindric was known to Sydney locals for his eccentricity and clockwork regularity on the city’s streets. A homeless immigrant from Yugoslavia who pushed his life possessions around in a handmade cart, Cindric rarely spoke. He slept during the day because it was safer and wore construction helmets for protection after he was mugged.

Goodwin has created a replica of Cindric’s trolley entitled Barangaroo Doppelganger. Inscribed with the words “Barangaroo Masterplan” and topped with a gilt-bronze model of James Packer’s proposed $2 billion casino, the artwork is a political statement on wheels.

Every Friday for the next year the Art & Design professor  and accomplished architect will push the trolley out of UNSW Galleries towards Walsh Bay to retrace Cindric’s steps.

Equal parts endurance test and performance piece, Barangaroo Doppelganger will be featured in UNSW Galleries’ latest exhibition, Shelter Union, which aims to explore living in  an “age of unsettlement”.

Presented in partnership with the Big Issue magazine and UNSW Built Environment, Shelter Union aims to address the issues of rental affordability, urban planning and homelessness. 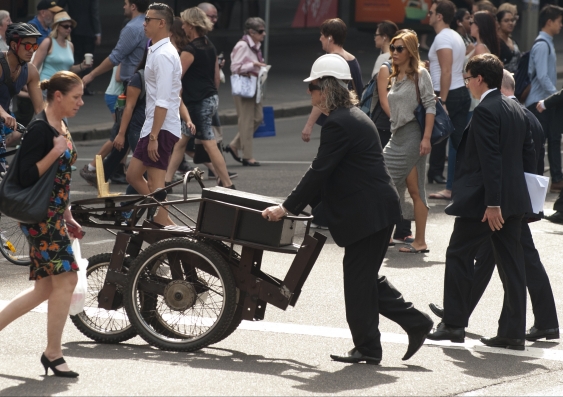 “The point of Barangaroo Doppelganger is to openly question the inclusion of a monolith like the casino from the perspective of an already compromised urban-planning process,” says Goodwin.

“Joseph Cindric is an integral part of the work because as an iconic figure in the city’s memory, he has helped form Sydney’s conscience.”

Describing the homeless man as a “public artwork in the flesh” Goodwin became obsessed with Cindric in the 1970s, making an Australian Film Commission–funded film about him in 1981 and building replicas of Cindric’s trolley. The original is now part of the Powerhouse Museum’s collection.

“Like Cindric, Barangaroo Doppelganger is a public artwork, with all the power art has to critique and hold us to account.  It asks a simple question, ‘How did this casino happen, and how does it implicate us all?’ ”

Goodwin believes the state government “padded the casino model with public art funds and boutique architectural projects, and dressed it up in the fluff of landscape design  to placate criticism”.

A major photographic project depicting the varied lifestyles of the Big Issue’s vendors will also be unveiled, providing an important human element to the exhibition.

“The photographers all have different stories to tell – some are homeless, while others have limited employment opportunities and are selling the Big Issue magazine to earn an income. The pictures connect with Shelter Union’s broad theme of ‘What does it mean to be living in our cities now?’ ” says Ainsworth.