Debates about the place of the monologue in theatre fall away when you have a show as compassionate and funny as The Weekend. 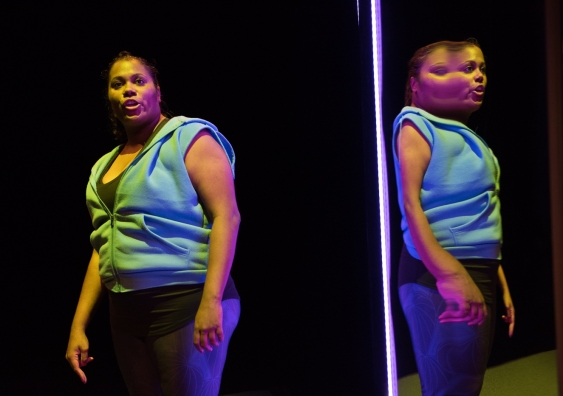 Shakira Clanton in Henrietta Baird’s The Weekend. Image by Jamie James/Courtesy of Moogahlin

If this year’s Sydney Festival is any indication, the monologue is back. So far, I have seen Adam Lazarus’s Daughter, Joel Bray’s Biladurang, Omar Musa’s Since Ali Died, Tara Beagan’s Deer Woman, and now Henrietta Baird’s The Weekend.

Not that the monologue ever really went away. Indeed, it has a long history in both Western and non-Western performance genres. But critical opinion about solo performance has waxed and waned over the past fifty years.

On the one hand, supporters argue it’s been an important vehicle for artists who have historically been excluded from the theatre to tell their stories. On the other, critics worry the monologue might be part of the memoir boom and a “wider culture of self-discussion and self-exposure”, symptomatic of a self-involved society. Yet these arguments fade into the background when you’re in the hands of a skilled storyteller like Henrietta Baird and a talented performer like Shakira Clanton. 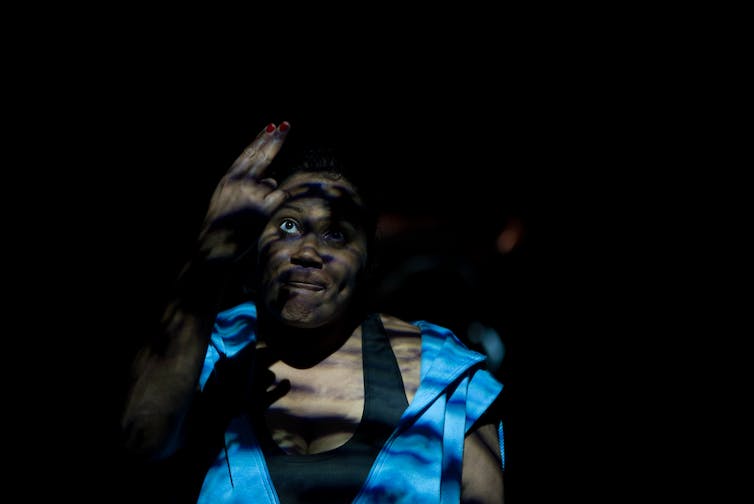 At this year’s Sydney Festival, the monologue is back. Jamie James/Courtesy of Moogahlin

The Weekend begins in relative silence. There is the sound of drumming, slow and steady like water dripping, and little else. The set is similarly stripped back, consisting of little more than a grey floor, two milk crates downstage, and a mirror with three panels upstage.

Clanton steps out from behind the mirror wearing purple tights and a black singlet. Later she’ll don a blue sleeveless hoody. She dances: bending her knees, flicking her hands upwards, and sometimes straightening her limbs like a martial artist. Choreographed by Vicki Van Hout, with whom Baird has previously danced, this section also reminded me of Dalisa Pigram’s martial arts-inflected choreography in her solo show Gudirr Gudirr.

The protagonist, Lara, is a dancer from Sydney working in Cairns for a few weeks. That is, until she receives a phone call from her youngest son Kyle, telling her that he and his brother Charlie are hungry because their dad hasn’t been over for more than two days and there’s no food in the house. Lara immediately gets on a plane. From the moment it lands, she’s on a mission to find her former partner Simon and “give him a growling”, as my mother might say.

In her pursuit across Redfern, Lara meets several women who have been similarly betrayed by him and his drug habits. She also finds they each have a habit of their own. Clanton plays all these women, as well as the two boys and an officious taxi call centre operator, with great skill.

The first woman we meet is Ronnie, a woman in her mid-40s, who is “not Simon’s type”, Lara reassures herself. While at Ronnie’s place she also meets Courtney, a sweet fifteen-year-old who is addicted to heroin. Then Betty arrives, agitated and desperate for some meth. 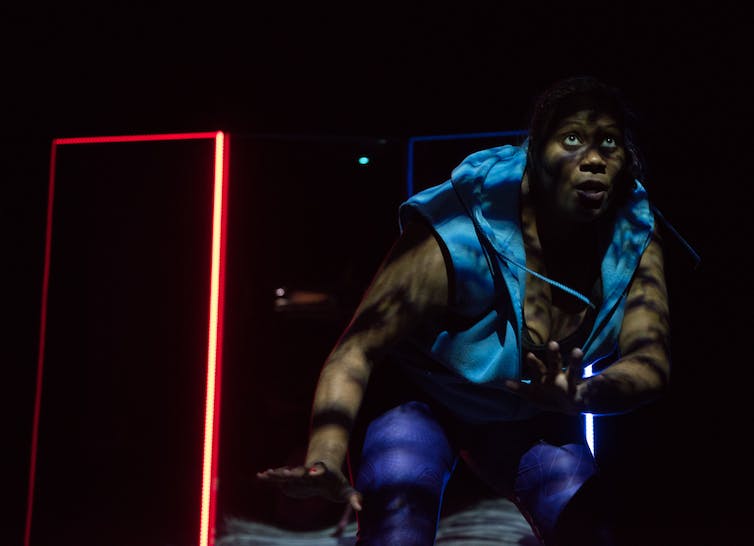 Shakira Clanton plays a dancer on a mission to find her former partner in The Weekend. Jamie James courtesy of Moogahlin

Lastly, we meet Ronnie’s sister DD. Chaos and comedy ensue but the possibility of tragedy is ever present: as soon as Lara agrees to carry Ronnie’s bum bag, spectators are audibly concerned; when she realises her boys have been by themselves for hours, we share her sweaty panic. Like Lara, we are constantly worried that something, somewhere is going to go horribly wrong.

Baird has a good ear for vernacular speech and her characters speak with both poetry and fury: telling jokes, swearing liberally, and coining phrases such as “she kicks them out before they even get a chance to pick up after themselves”.

She also has an eye for detail, especially fashion, as evidenced by Lara’s descriptions of what each character is wearing. Ronnie has “a big green jumper and track pants on with fluffy slippers. Like she’s still in the same clothes from the 80s”; Courtney is wearing “the shortest shorts. You know those sexy ones with the pockets that hang out the bottom”; and DD is “mutton dressed as lamb. Big hair and little sun dress like she’s a teenager in the 90s!”. 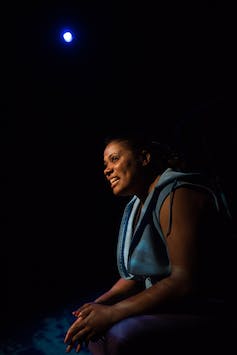 Baird’s characters speak with both poetry and fury. Jamies James/Courtesy of Moogahlin

Most of all, Baird writes with compassion: every character is given a backstory that contextualises their addiction and it’s clear that every one of them is simply doing their best.

This combination of humour and compassion also structures Clanton’s playful but careful performance. Ronnie has a strong, stern voice but speaks of her children with a throaty grief; Betty’s voice is high and her physicality is agitated; Courtney speaks in a slow whisper and with a gentle smile; and DD snaps her fingers, playfully slaps her own arse, and spins on her heels.

Like the rest of the production, the lighting design (Karen Norris) is understated. A string of lights frames each of the mirror’s sections, with different colours conjuring different locations. The lights are green when Lara is in the grimy lift, for instance, and later flash red and blue when the police are nearby. The concrete carpark is suggested through a grey and streaky light.

The sound design (Nick Wales and Rhyan Clapham) is similarly low-key, with the drums continuing through the entire performance. When the music swells with danger, it is all the more effective. These directorial decisions by Liza-Mare Syron allow the script and performer to shine. 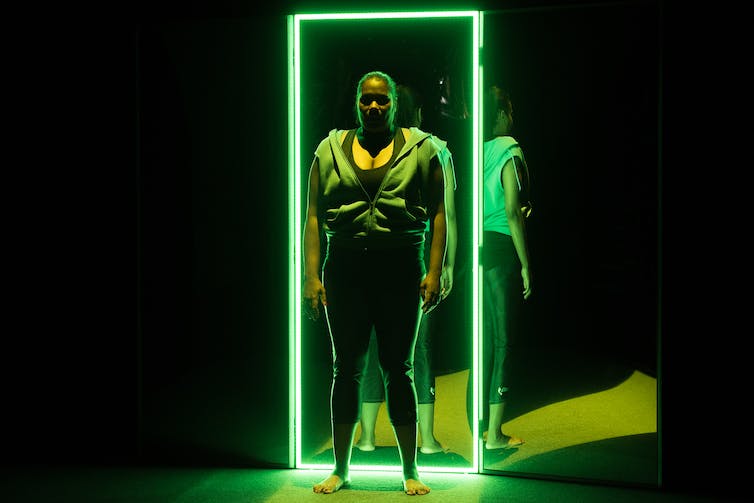 The lighting in The Weekend uses colour to conjure different locations. Jamie James/Courtesy of Moogahlin

Perhaps the monologue is back for political reasons, or perhaps it is simply a matter of economics, since solo shows are cheap to produce when compared with other epic festival fare. Or perhaps it indicates that a new generation of writers is emerging: artists often start with semi-autobiographical material before moving onto bigger, more complex pieces. Leah Purcell, for instance, started with Box the Pony in 1997; 20 years later she is about to film her award-winning adaptation of The Drover’s Wife. For this reason, I can’t wait to see what Baird does next.

The Weekend was staged as a work-in-progress in 2017 at the biennial Yellamundie National First Peoples Playwriting Festival, where it was one of the hits of that year, as recorded in Maryrose Casey’s review. Later this week, the 2019 iteration will get underway. If you want a glimpse of what you might be seeing at the Sydney Festival in 2021 – and of the future of Australian theatre more generally – I suggest you get along to listen.

The Weekend is being staged as part of the Sydney Festival until January 23. The script is available to read until the end of January here.