UNSW experts collaborated on an exhibition that used innovative techniques to restore an unseen portrait of Henry VIII and solve a mystery from the 16th century. 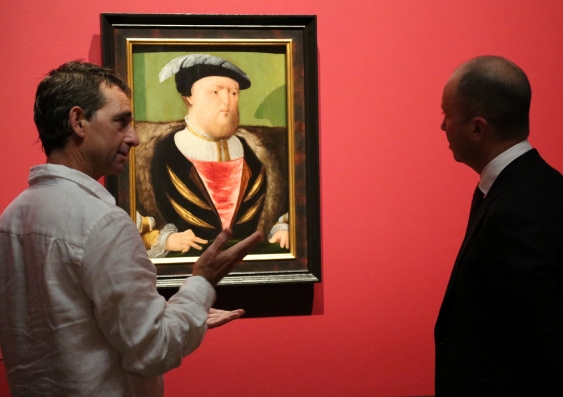 A 16th-century portrait of Henry VIII is on public display for the first time in more than 60 years thanks to an Australian-first preservation project that uncovered secrets about the painting’s hidden history.

Henry VR, on exhibit at the Art Gallery of NSW (AGNSW) until 9 September, is a groundbreaking virtual reality display that takes visitors into a work linked to the birth of modern portraiture, and inside the artist’s studio.

Dr Andrew Yip, from the iCinema Centre for Interactive Cinema Research at UNSW Art and Design, collaborated with experts from AGNSW and the Australian Synchrotron to uncover clues to the painting’s provenance and other secrets. 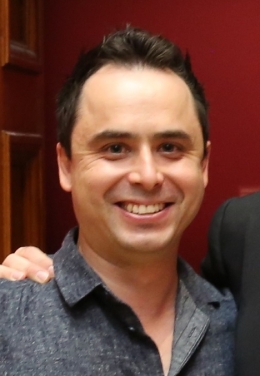 Not only did the project lead to a meticulous restoration by Simon Ives, paintings conservator at AGNSW, it also gave rise to the Gallery’s first conservation science exhibit and first dedicated virtual reality display.

“These experimental imaging techniques allowed us to communicate important scientific and artistic discoveries to new audiences by bringing history to life in a tangible way. The exhibition demonstrates the important role that collecting institutions play in preserving and interpreting cultural histories.”

Purchased in 1963 from Sotheby’s in London, the artwork is the only Tudor portrait in the Gallery’s collection. It was exhibited briefly in the same year but has not been displayed to the public since.

“The portrait was languishing in a drawer,” Yip said. “It was a collection orphan. It could never be exhibited in context and it was in quite bad condition. There was no real urgency to restore it until Simon took this on as a personal project.”

Using a particle accelerator and microscopes, researchers analysed the portrait’s chemical makeup to uncover previously invisible elements of the original artwork. The technique revealed that parts of the painting were modified, in some cases using materials that were not available until more than 250 years later. It also affirmed theories surrounding the painting’s provenance.

Yip said the portrait strongly resembled other 16th-century portraits of Henry VIII that were completed in London, attributed to the workshop of the ‘Cast Shadow Master’ where artists produced royal portraits on wood panels. The workshop was so named because of the distinctive use of shadows cast from Henry VIII’s head and hat, which AGNSW’s version did not have. After scanning for chromium, an element used in green paint after the 1800s, researchers were able to determine areas of green that were not original to the painting.

“The chromium map revealed that the entire right side of the panel had been painted over and there was a cast shadow beneath,” Yip said. “It gave us evidence to say that this painting was from the Cast Shadow Master Workshop and painted during Henry VIII’s lifetime.”

In addition to restoring the painting, Yip and the team created a virtual replica of the artist’s studio in 1530s London. Little is known about the Cast Shadow Master Workshop because most of the records were destroyed in the 1666 Great Fire of London. Yip was able to piece together a plausible site for the studio’s location and other details based on architectural drawings and documentation that had survived. 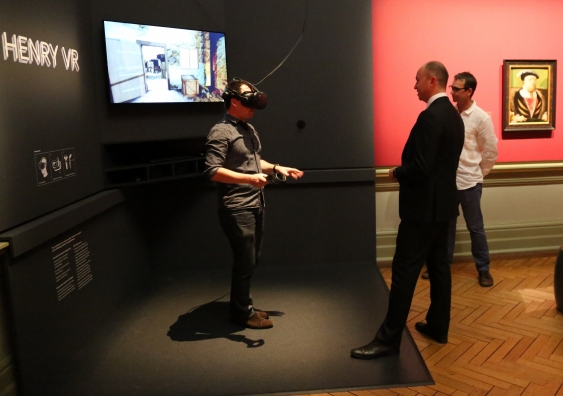 The exhibition includes a virtual re-creation of the artist's studio from the 16th century. Photo: supplied

Visitors enter the studio on Trinitie Lane on the northeast side of the Thames River near Hampton Court, Henry VIII’s palace. Once inside, visitors find artist tools, materials used to create pigments and other objects of the period.  Audio clips provide ambient sounds and describes medieval recipes for mixing paint colours.

“It is through play investigation that you learn about the mineral elements and techniques used to create the painting,” Yip said. “You can create a 3D map of the location of pigments on the painting, or teleport yourself inside the particle accelerator to learn about the science behind the reconstruction.  It’s all a living environment. If the cord was long enough you could walk out the door and jump into the Thames.”

Henry VR is open until 9 September. For more information visit the exhibition website.