Opinion Here’s looking at: Deep Breathing: Resuscitation for the Reef by Janet Laurence

As scientists make a renewed push for greater action on climate change, a new installation at the Australian Museum brings home the fragility of our world, writes Prudence Gibson. 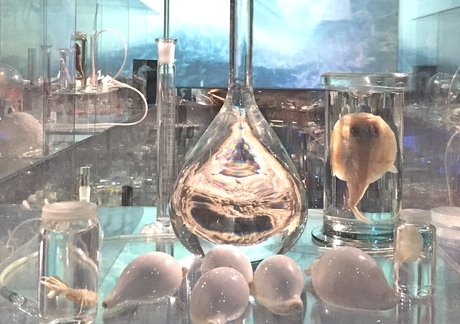 OPINION: Have you noticed how loud your breathing is when you’re swimming under water? It’s a muffled and eerie sound, but there is pleasure in the evenly timed movement of air through your lungs.

If you cover your ears, the same echoed inhalation and exhalation blows a gale inside your ear drums. Yet in our day to day lives, we often forget to be aware or pay attention to breath or to even hear the sound of our own breathing.

Deep Breathing: Resuscitation for the Reef, an installation by artist Janet Laurence, reminds us of the gift of life and to be more aware of how we live and function on the planet. As artist-in-residence of the Australian Museum, Laurence spent time on Lizard Island at the Museum’s reef station. She also had access to the Museum’s enormous collection of fish and other sea life specimens.

The work she created, which will be in the foyer of the Museum until early 2017, is a tall layering of open Perspex pigeon holes. A high wall of over six feet sits at the rear, with a smaller wall of transparent plastic in the front. They hide a deep channel in between where large specimen jars are heaped on the mirrored floor with incredible fish life from the Australian Museum collection.

Within the various scientific bottles, glass jars and laboratory flasks are myriad reef items – shells, sea sponges, fish. Other objects are wrapped in white fabric or connected with each other via medical tubing. The whole aggregated work is placed upon a mirror surface so that multiple reflections and spectral light are cast in every direction, including the massive whale skeleton suspended from the museum ceiling.

The effect of this mirroring is to reflect, both literally and philosophically. Every surface reflects another surface close by, which recalls for the viewer the endless sparkle and shimmer of the ocean.

The mirroring also fuels our reflections on how these water species are at risk, as well as the coral itself. The Great Barrier Reef is bleaching so quickly, it’s hard to see without wanting to shield your eyes. Its acceleration into extinction is irrefutable and so the multiplicity and diversity that we see in Laurence’s mirrors and reflections are a sleight of hand, a misleading trick.

Of course this is exactly the point that Laurence is making. She has been an advocate for animals, plants and at-risk ecologies for many years and her work has consistently drawn our attention to uncomfortable truths.

Laurence has had a long art career spanning thirty years, yet the science world is familiar with her work too. She has undertaken many collaborations with plant biologists, environmentalists, landscape designers and bush regeneration experts in Australia, the UK and Germany.

Her knowledge of the natural world has been developed after doing research, gathering film and photography footage in various locations such as Singapore, China, Japan and Germany. Laurence has an established role as an environmental advocate and member of various animal rights organisations and her artworks are a cry for better care and for a quicker response time.

She originally launched into the art world as a painter of landscapes but her alchemical curiosity soon led her to mix her media and build art installations out in the landscape. Since those early years, she is better known for bringing the landscape (or deep seascape) into the gallery space.

In previous works, trees have been hooked up to intravenous bags, branches shrouded in bandage gauze, strange skulls of small species dipped in gold and collected reef fish in formaldehyde.

In Deep Breathing, medical tubing is threaded between the scientific jars and measuring flasks. This creates fluidity between the specimens (nature) and the scientific materials (culture). By attaching one sea sponge to some bleached coral to an endangered reef fish, Laurence also creates links between the various elements of any given ecology.

The installation reminds us of the fragility of the natural world and the equal fragility of the human condition. Why can’t we face these climate change issues and work together to apprehend disaster?

Can we really be so politically and economically bound by narcissistic tendencies that we can’t even slow the acceleration towards ecological crises? Laurence gives us pause to reflect but, be warned, you might not like what you see.

Deep Breathing: Resuscitation for the Reef will be at the Australian Museum until March 2017

Prudence Gibson is an Art writer and Tutor, UNSW.

Lighting spotfires under a palace of colonial power