When Mike Parr lay supine before Jackson Pollock's Blue Poles, streaked with his own blood, he offered a new way of looking at the act of painting, writes Edward Scheer. 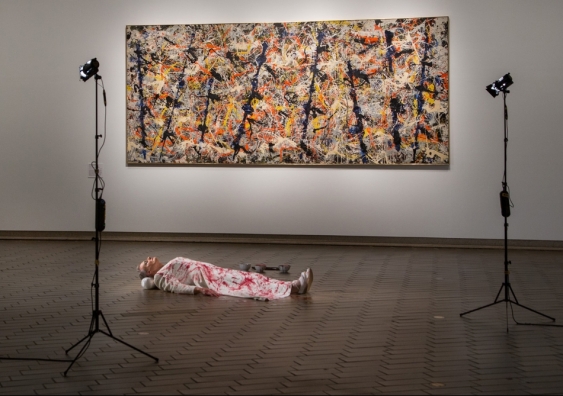 OPINION: On the opening night of his retrospective exhibition, wearing a long white gown, Mike Parr had blood extracted from the veins in his right arm while seated before a crowd. He then lay on the floor of the National Gallery of Australia beneath Pollock’s Blue Poles, before collaborating artist Linda Jefferys painted the blood over Parr’s body in the manner of Pollock’s famous drip painting method.

He then lay still and silent for 20-30 minutes like a screen or a canvas on which we could project our own unconscious images. This was Parr’s new performance piece, Jackson Pollock the Female.

There are a number of things going on in this simple action. Parr is personalising the work of art, using his own body as material, which is a basic feature of performance art. He renders his own form supine, vulnerable and passive.

In direct contrast Pollock was celebrated by Clement Greenberg for his “cowboy” style of virile American masculinity.

With a little help from Greenberg and others, Pollock’s cathartic and explosive style of painting captured the imagination of the art world in the immediate post war years, and earned the derision of the Australian public in 1973 when his work was acquired by the National Art Gallery for the record price of $1m.

By performing the action in front of Blue Poles, Parr is also returning this famous image to its moment of creation in the action painting method developed by Pollock.

Action painting foregrounds the process of making the artwork, and features the use of gestures made by the artist such as dripping, flicking, smearing and sometimes violently flinging paint onto a surface.

These gestures were captured by Hans Namuth’s famous films of Pollock in 1950 that some scholars credit with kickstarting the practice of performance art as a distinct genre.

The films show Pollock painting outside his house with the canvas stretched out on the ground rather than on a vertical plane to better receive the paint. By lying on the ground, Parr wanted to draw attention to this essential “horizontality” (his term) of Pollock’s art. But the films really focussed on the almost ritualistic kind of behaviour that Pollock adopted.

Parr reminds the audience in the Gallery that one of its most iconic and expensive images has its origins in these trance-like moments of action painting. It’s as if he’s warning us that in our veneration of paintings, we might lose sight of their contingency, the physical labour of their making. At the same time Parr draws attention to this aspect of his own work, a fundamental part of his approach to making art.

Like Pollock, Parr makes his work in periods of great intensity, seeking an altered state of consciousness – moments in which he can break away from everyday concerns and habits of perception.

For his opening night action, Parr had imagined “draining the body of blood”. On the night, a sufficient quantity of blood was extracted to enable a generous amount of material for painting; also enough that Parr would feel on the verge of fainting. In such a moment, rational and ego-driven functions of the human animal are overridden by the basic mechanical forces of the body.

For many artists, this is a treasured reservoir of authentic expression.

Other works in the exhibition testify to Parr’s relentless search for this authentic form. In video and photography, we see him approach extreme states again and again but always with a careful eye to the frame and to the art historical context in which he is working.

Parr is acutely aware of the work of his fellow travellers in experimental art around the world including Pollock’s. Parr’s own oeuvre, with its robust engagement in image making that is nothing short of transformational, now sits alongside it, literally as well as figuratively. Parr’s images have changed the way we think about forms such as etching by unleashing the force of their creation on the viewer.

A retrospective at the national institution for art is a significant milestone for any artist, but – just as with Blue Poles – Australians have always had a love/hate relationship with Parr’s performance work over his 45 year career. His prints, sculptures and photographs are in all the major Australian collections and increasingly in international collections such as the Tate Modern.

It was the 1960s and Mike Parr was in his early twenties when he started making art. He typed words on paper, making intricate visual patterns corresponding to the meaning of the words. Working on a typewriter was a significant challenge for the artist, who has only one arm.

Parr eventually focussed on written instructions for actions and he began to perform his instructions in the Inhibodress independent gallery that he co-founded in Sydney in 1971. The media got hold of these radical experiments and Parr quickly established a reputation as an uncompromising maverick.

Throughout the 1970s he developed an increasingly sophisticated approach to his art in Australia and internationally as the first wave of performance art broke across the international art scene.

It’s perhaps not surprising that major art institutions, more used to acquiring and accessioning objects, have not yet embraced performance art – the core part of Parr’s practice. So it is especially important that the Gallery chose to mark the career of Australia’s most significant experimental artist with an opening night performance.

In the video version of Jackson Pollock the Female, Parr remains still and silent. It appears both respectful and suggestive of a visual joke on the mania of the “action painting” method. He presents a cross gender presence, heavily made up and wearing a white dress.

This is also the opposite of the macho figure of Pollock celebrated as the first art media star of the late 20th century. It’s the repressed other side of this media fantasy of the male artist.

Part homage and part sabotage, Mike Parr’s reimagining of Pollock was a sensational start to his exhibition Mike Parr Foreign Looking and, as radical a gesture, as it was probing and critical. In this, it is representative of Parr’s work more generally as the exhibition demonstrates.

A self consciously scabrous creation, Jackson Pollock the Female offers a new way to look at Australia’s most famous art acquisition. In so doing, it shows an Australian artist drawing from the centres of world culture to make an image uniquely his own.

Mike Parr Foreign Looking is showing at the National Gallery of Australia until November 6, 2016.

Edward Scheer is a Professor of Performance and Visual Culture, UNSW.

Re-visioning the opening night of a national art museum