Australian dramatist David Williamson’s new book is a mash up of memoir and autobiography, which casts himself as a former ‘plunderer’ of other’s lives. 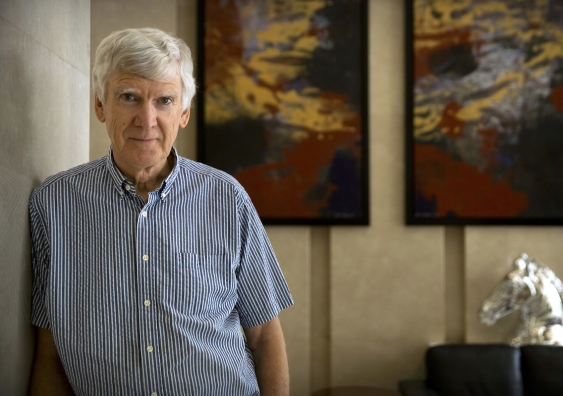 Is playwright David Williamson a “Bad Art Friend”? The ethical questions raised by the viral New York Times article about two writers’ friendship, which imploded when one used the other’s kidney donation as inspiration for a short story without permission, reverberate through his memoir, Home Truths. In fact, the tale could be a Williamson play.

Throughout Home Truths, Williamson reflects on taking creative licence with others’ lives. Who has the rights to their conversations, characteristics and intimacies? But he rejects Bob Ellis’ infamous accusations that he stole the idea of his play The Removalists (1971), and plagiarised in the film Gallipoli (1981). He’s not that “Bad Art Friend”.

Stunningly prolific, Williamson has crafted 56 plays since his debut, The Indecent Exposure of Anthony East, in 1969. Don’s Party also premiered in 1971, and The Club in 1977. Williamson’s final plays, Family Values and Crunch Time, were staged in 2020 in the shadow of COVID-19.

In this same half-century, he wrote or co-wrote 26 film and television screenplays, including adaptations of his plays. Unsurprisingly, he is honoured in the Live Performance Australia Hall of Fame.

Ever the dramatist, Home Truths reads like Williamson is on a stage narrating a monologue of his life with the lights sporadically falling on actors performing an anecdote or play extract, written in vignettes of script throughout the book.

Read more: Review: Kate Grenville's A Room Made of Leaves fills the silence of the archives

Home Truths is over 400 pages long, which makes for a bulky beach read in hard cover. Its length and chronological structure from childhood to Williamson’s self-declared retirement in Noosa suggests the book is really an autobiography.

Thanks to the “memoir boom”, memoir is a more marketable term. However, memoir is a “slice of life” whereas autobiography is traditionally a grand, chronological narrative. In Home Truths, Williamson hasn’t written a slice of life but given readers the whole cake.

Both memoir and autobiography have expectations of accuracy and authenticity even if memory can be subjective. Fake memoirs are now routinely exposed or the author’s claims scrutinised, as has happened with former Trump press secretary Stephanie Grisham’s recent memoir. Williamson fact checked using the meticulous diaries of his wife, writer Kristin Williamson, and subscribes to the belief that memory is not selective.

The irony of memoir is that it’s relational rather than solely reflective on the self, and this is where Williamson claims ownership of the genre. Home Truths is an Australian cultural and political history of which Williamson has had a backstage view. He recounts staging his breakthrough plays at the alternative theatres La Mama and the Pram Factory in Melbourne, and Nimrod in Sydney. His ensuing success is set against a backdrop of Gough Whitlam’s social reforms and sacking, and the rise of the right.

The continual vacuum of arts funding; cultural cringe, and identity politics weave throughout the book. He bristles that many of his plays are critiqued as middle class, first world problems, and that his satire is anti-feminist.

Williamson pointedly describes Family Values as, “a cry of rage at our inhuman refugee detention policies, packaged as a family drama”. The comment reads like one last clap back to his lifetime of critics.

Within this history is a study of characters whom Williamson has been inspired by, loved, admired, fought, collaborated with, betrayed or - in the character of his wife - all of these things.

Williamson begins with his mother Elvie. Apart from insecurity about his height and his miserable choice to study engineering at university, it’s Elvie, “a seething cauldron of hostility”, who’s the focus of these early chapters.

Elvie inspired “Irene” in his play What If You Died Tomorrow? — does that make Williamson a “Bad Art Son”? In Elvie’s eyes, no. Elvie saw the play’s 1973 production in which Irene was played by Ruth Cracknell, and Williamson recounts: “[Mum] saw the plain-speaking Irene as the heroine of the piece, missing the satirical edge entirely.”

Less happy were friends who after seeing Don’s Party, recognised themselves and their conversations from an actual election night party at Williamson’s suburban Melbourne home. One was aggrieved at the play’s discussion about the size of his penis from the party, that Williamson recalls, “had become a national issue when the play went on to become a smash hit and toured all states”.

There’s a certain ruthlessness in making art, and at least in the early plays, I wasn’t immune from it.

Kristen Williamson and their turbulent marriage as a constant inspiration is Williamson’s most personal disclosure of his ruthlessness. During rehearsals for Emerald City (1987), Williamson recalls that Robyn Nevin told Kristen, “‘Looks like I’m playing you again’. Robyn had hit a raw nerve”.

Kristen later wrote a biography of Williamson in 2009.

Williamson is now a reformed “Bad Art Friend” and “Bad Art Husband” who learnt to show those who inspire him drafts before they see themselves as art. His candour includes acknowledging the pain that he has sometimes caused off stage.

Of all the characters in Home Truth’s mash up of autobiography and memoir, as much as Williamson casts himself as the “plunderer” of others’ lives, it is still the narrator whom you learn about most.