Alex Seton's sculpture 'A Durable Solution?' dominates the protest exhibition at the forthcoming ALP national conference. He has also created an official memorial to Australian soldiers killed in Afghanistan. 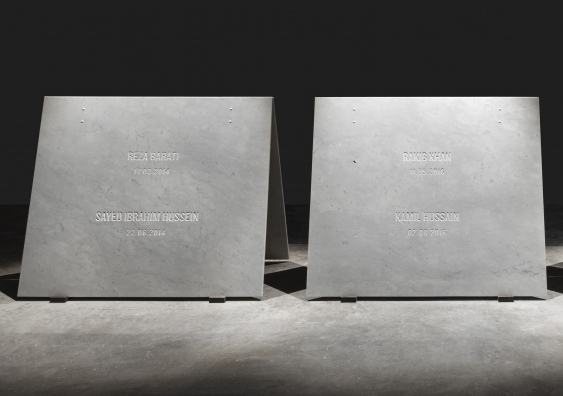 Detail from Alex Seton’s A Durable Solution? - a series of memorial plaques naming the 12 men who have died under our ‘care’. Sullivan & Strumpf

Alex Seton’s sculpture 'A Durable Solution?' is concentrating the minds of some delegates as they approach this weekend’s ALP national conference in Adelaide. It is the key work in All We Can’t See, an exhibition in the foyer of the Adelaide Convention Centre.

No delegate will be able to avoid this visual response to the Nauru Files, the records of life on that island first exposed by The Guardian. With exquisite timing, the show’s opening reception will be held at the centre on Sunday, the evening before the Labor Party debates its refugee policy.

Seton has a carved series of stark, minimalist memorial plaques, naming the 12 men who have died under our “care” on Nauru and Manus Island. There is no compromise, no gloss. The white Carrara marble, the same material used by Michelangelo, has been pared back, muted. Its surface is bereft of texture, the only incisions are the names of the dead and the dates they died. 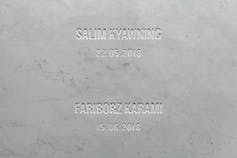 A Durable Solution? is the third time this relatively young artist has made work that can be described as a collective memorial. Even though each of these sculptural installations commemorate the lives of a specific group of people, they also focus on the individual, to allow private grief. Seton has described his approach to memorials as “capturing those moments that are a test of our humanity”. 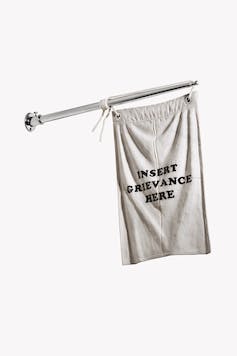 He came to memorials via his series of sculptures of flags. Seton is an artist passionate about one material, marble. While this may be the great classic stone for monuments, it is very unfashionable in the 21st century. But his childhood home was near the Wombeyan Caves Marble Quarry, and he was fascinated by those rough blocks of veined rock that could be transformed beyond recognition.

So while studying a Bachelor of Art Theory degree, Seton began to carve. His passion for the precise craft of manufacture melded with his understanding of subtext and symbol. He learnt to carve stone so that it was easily mistaken for fabric. He looked at the ultimate symbolic use of cloth – in flags.

Flags may be ironic, but more often they are patriotic. They are the symbols soldiers fight under, and when they are killed a flag will drape their coffin. Seton is the same age as some of the young soldiers who first died in Australia’s longest war in Afghanistan. As part of coming to terms with the deaths from his generation, he began to carve folded Australian flags to honour the dead – one for each soldier.

These are made of pink, pearl marble from Chillagoe in north Queensland. Its flush suggests flesh and blood. Each is “bound” with a cloth halyard, creating confusion as to where the stone may begin. Twenty-three flags were first exhibited in Lismore and Brisbane. More have been added with each death. 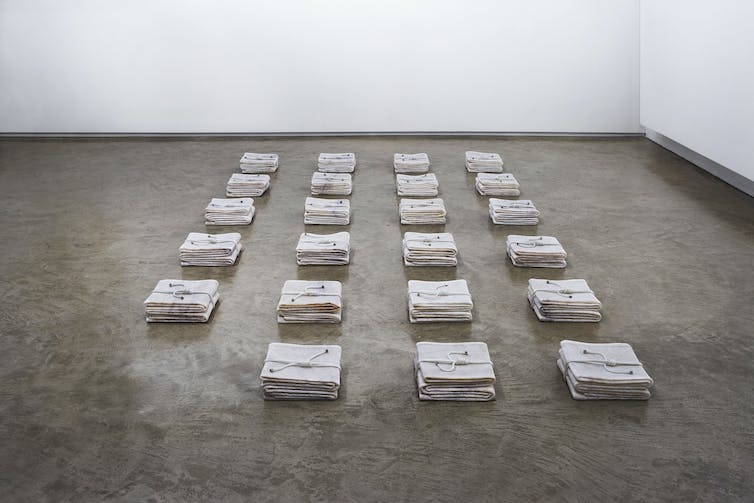 Alex Seton, As of Today, marble with halyard. Sullivan + Strumpf

The title of these works, As of Today, reminds the viewer that more deaths may be on the way. The Australian War Memorial purchased the flags, with a commission to add more when necessary. There are now 42. Seton has said,

Initially I thought this work was about us – how easily we forget – but it is not about us at all. It is about those who gave their lives and whose memory we now preserve.

At the same time as the Australian War Memorial was preparing to show his work, Seton was completing a rather different memorial. Dark Heart, at the 2014 Adelaide Biennial, can be described as a dive into the dark night of the national soul. Much of the art was confronting, pricking the national conscience as a Jeremiad against the follies of modern Australia.

Now owned by the Art Gallery of South Australia, Someone Died Trying To Have a Life Like Mine was made in response to a particular incident in the sorry history of the many boat people who have died at sea.

In May 2013, 28 empty lifejackets were found washed ashore on Cocos Island. There is no official record of who the voyagers may have been, but one jacket contained a small amount of Iranian money. 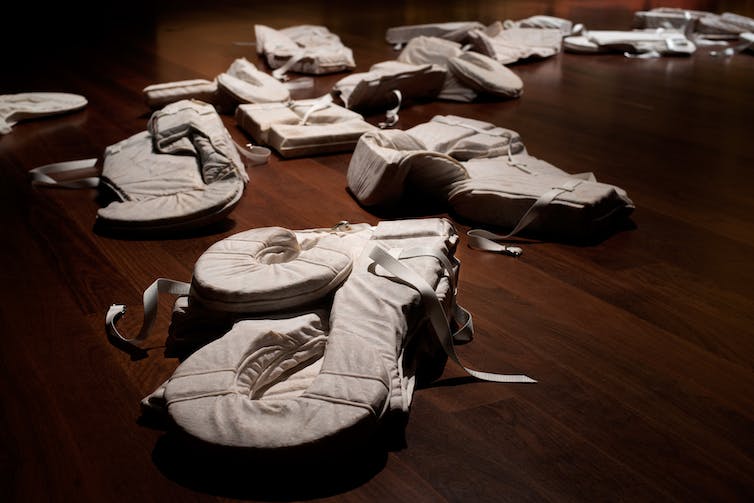 Seton began his work to honour these dead, and to give an answer to the question many ask – why set off in an unseaworthy boat across hostile waters? The answer is that these people want what we take for granted, a life like ours.

Each carved jacket manages to quote elements of the western canon of art. One is burst open like Michaelangelo’s Dying Slave. Two are together, as intimate as a quattrocento Madonna and Child. Others are placed in an arc, like flying angels.

The power of Someone Died Trying to Have a Life Like Mine comes from its evocation of empathy, the realisation that the people Seton is commemorating were like us. They wanted to walk in our shoes, so we are drawn to don their lifejackets.

It is this empathetic approach to honouring the dead that gives Alex Seton’s memorials their power. He moves beyond the studied factionalism of party politics and asks the viewer to consider the shared humanity of those who have died.

It does not matter whether they are soldiers or asylum seekers, lost at sea or imprisoned on land. They are us, and we are them.