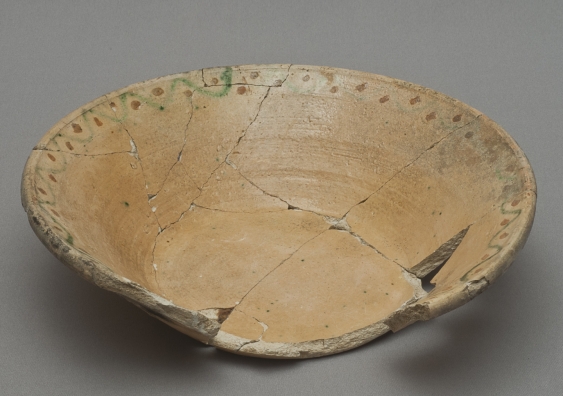 A large bowl or pan thought to have been made in Sydney by the potter Thomas Ball between 1801 and 1823. Courtesy of Casey & Lowe, photo by Russell Workman

In April 2020, Australia will mark 250 years since James Cook sailed into Kamay (later known as Botany Bay) on the Endeavour, kicking off a series of events that resulted in the British arriving and staying uninvited first at Warrane (Sydney Cove) in 1788, and later at numerous locations across the continent.

Indigenous sovereignty was never ceded, and as a nation we are still grappling with the consequences of these actions of 221 years ago. Although we often focus on the large-scale impact of British settlers – the diseases my ancestors brought, the violence they committed – we are less good at seeing the small and unwitting ways that settlers participated in British colonialism. One such story emerges when we track the history of an unlikely cultural object – clay from Sydney.

In April 1770, Joseph Banks – the gentleman botanist on James Cook’s first voyage – recorded in his journal how the traditional owners of Botany Bay painted their bodies with broad strokes of white ochre, which he compared to the cross-belt of British soldiers.

Eighteen years later, Arthur Phillip, Governor of New South Wales, sent Banks a box full of this white ochre – he’d read the published journal and suspected Banks would be interested. The ochre was a fine white clay and Phillip wondered whether it would be useful for manufacturing pottery.

Once in Britain, this sample of clay took on a life of its own, passed between scientists across Europe. Josiah Wedgwood – Banks’ go-to expert on all things clay-related – tested a sample and described it as “an excellent material for pottery”. He had his team of skilled craftspeople make a limited number of small medallions using this Sydney clay.

These medallions depict an allegory according to the classical fashion of the time. A standing figure represents “Hope” (shown with an anchor) instructing three bowing figures – “Peace” (holding an olive branch), “Art” (with an artist’s palette) and “Labour” (with a sledgehammer). 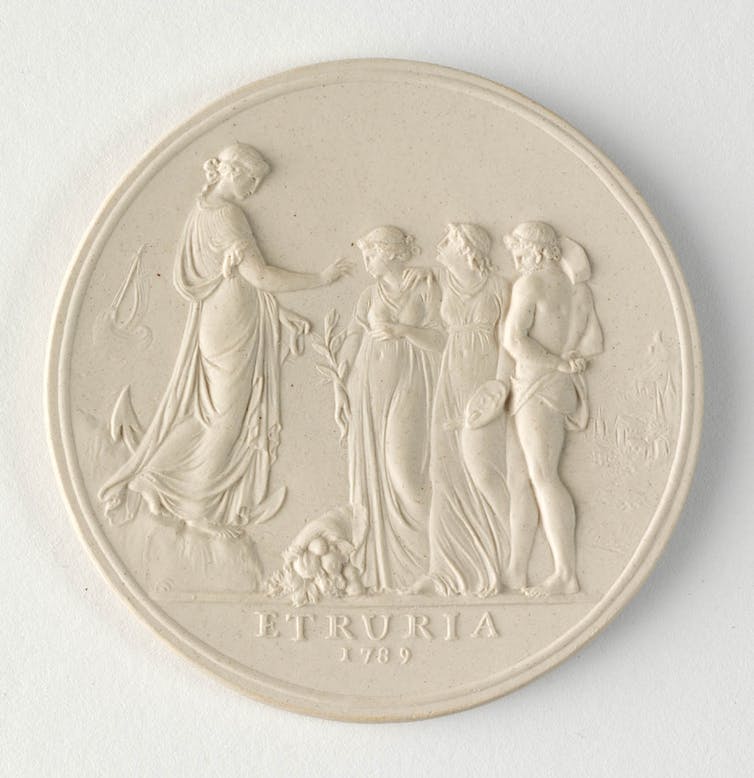 A cornucopia lies at their feet, representing the abundance that these qualities could produce in a society, while in the background a ship, town and fort suggest a flourishing urban settlement supported by trade.

This little ceramic disc made out of Sydney clay represented tangible evidence of how the new colony could flourish with “industry” – the right combination of knowledge, skills and effort. Yet notably absent from this vision of the new colony was any representation of Aboriginal people. 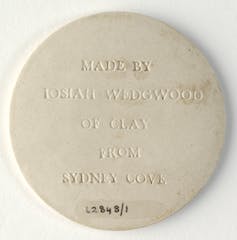 The back of the Sydney Cove medallion. State Library of NSW

For something only a little larger than a 50 cent piece, this medallion had a long legacy in colonial NSW. It was reproduced on the front page of The Voyage of Governor Phillip to Botany Bay – one of the first accounts of the fledgling colony. Later it was adapted for the Great Seal of New South Wales – attached to convict pardons and land grants.

Later still, a version formed the first masthead of the Sydney Gazette – the first newspaper in the colony. The ideas behind the medallion gained even wider circulation in the colony. As historian of science Lindy Orthia has argued, the Sydney Gazette was a place where various schemes for improving manufacturing and farming were regularly discussed. 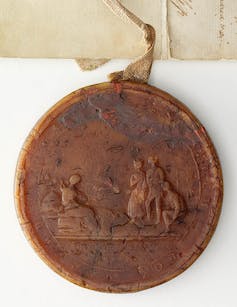 The first Great Seal of New South Wales as used on a land title deed. State Library of NSW

We can see the impact of these ideas by looking at what colonists themselves did with the clay. Although the first examples of Sydney-made pottery were unglazed and fragile, by the first decades of the 19th century, the quality had improved.

Over the last 30 years, archaeologists have found examples of Sydney-made pottery across Sydney and Parramatta on sites dating from the 1800s to 1820s.

Commonly called “lead-glazed pottery”, this material ranges from larger basins and pans, to more refined, decorated items, including chamber pots, bowls, plates, cups and saucers. Although basic, it clearly was based on British forms. The discovery of the former site of a potter’s workshop in 2008 confirmed this material was made locally.

It has been found on sites ranging from the Governor’s residence on the corner of Bridge and Phillip Street, Sydney, to former convict huts in Parramatta, alongside imported British earthenware and Chinese export porcelain. Visitors to the fledgling colony commented on this pottery as evidence of its growth and development. 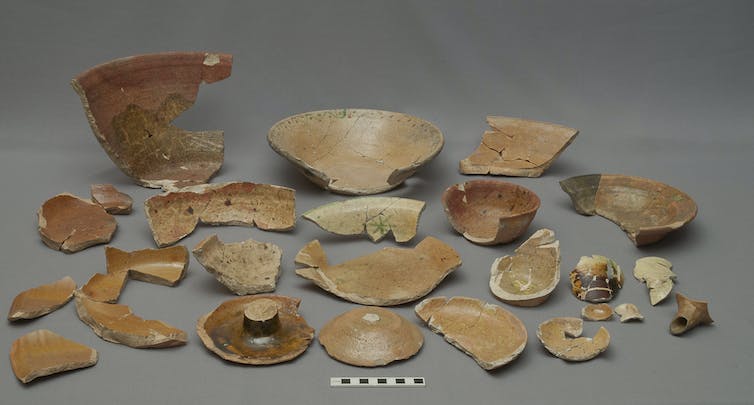 Sydney-made pottery helped colonists maintain different aspects of “civilised” behaviour. When imported tableware was expensive, local pottery allowed convicts living outside of barracks and other poorer settlers to use ceramic plates and cups, rather than cheaper wooden items.

Locally-made pots were also used to cook stews over a fire. Stews not only continued the established food practices of their British and Irish homes, but also conformed to contemporary ideas of a good, nourishing diet.

These practices around food would have distinguished colonists from the local Aboriginal people. In the coastal area around Sydney, locals tended to roast meat and vegetables, and to eat some fish and smaller birds or animals after only burning off their scales, feathers and fur.

George Thompson, a visiting ship’s gunner who had a low opinion of most things in the colony, thought that eating half-roasted fish was evidence of “a lazy indolent people”.

As historian Penny Russell has discussed, eating “half-cooked” food became a well-worn trope in the 19th century, frequently repeated as evidence of the supposed lack of civilisation by Aboriginal people. By contrast, as the historian and curator Blake Singley has suggested, European cooking methods frequently became a way that native plants and animals could be “civilised” and incorporated into settler diets.

Through the use of local pottery, ordinary settlers could participate in this civilising program, replicating the culture of their homeland. These small, everyday actions helped create a vision of Sydney that excluded Aboriginal people – despite the fact that they have continued to live in and around Sydney since 1788.