Professor Helen Lochhead has been recognised by the Australian Institute of Architects for her outstanding contribution to gender equity in architecture. 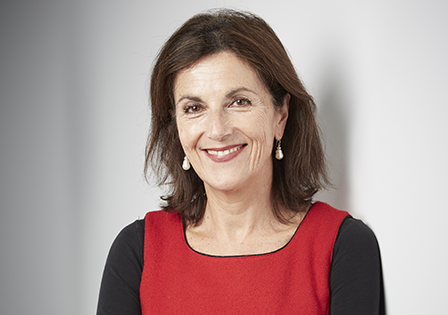 When Professor Helen Lochhead was a university student, a professor told “the three women in the front row” that they were “taking opportunities away from the boys”.

The inference was that female graduates were not likely to pursue a career after university.

Professor Lochhead happened to be one of the three women, and went on to get the Architects Medallion on graduation.

The “gender blindness” hadn’t changed much when she was elected onto the Australian Institute of Architects National Council.

“There was one exiting woman on the National Council. And the only other woman in the room of 20 was the person taking the minutes,” Professor Lochhead says.

She has witnessed it again and again in her career.

“While it is improving all the time, there is a still unconscious bias in a range of settings.”

For the last three years Professor Lochhead has been the first female Dean of the Faculty of Built Environment at UNSW Sydney, where she has made it a goal to shift the gender balance to ensure that more women graduates translate into more women in leadership in the built environment professions.

“There is an opportunity and a responsibility being in a leadership role to make a broader difference,” she says.

Women graduate from various Built Environment programs, such as architecture and construction management, in equal numbers, but their careers often stall once they start families. In the case of the Faculty, she set about trying to remove this glass ceiling which saw many women feeling mantled with the position of ‘Senior Lecturer for Life’.

Two years ago, Professor Lochhead pledged to ensure 50% of leadership roles in the architectural profession would be held by women by 2025. She met this goal within her Faculty’s leadership team and advisory council this year.

“At UNSW we consider a person’s progress and achievements ‘relative to opportunity’,” she says. “This ensures each individual’s achievements can be evaluated relative to their peers taking into account career breaks such as parental leave, caring responsibilities, or illness. We consider the whole person in the context of their promotion.”

The professor has proactively mentored and coached women in the Faculty to progress their careers through professional development and preparation for higher-level positions and promotion. As well, she has worked to ensure appropriate recognition of service and engagement roles when assessing people for leadership roles. From a low base of just one female professor in 2016, there are now six women professors and four new associate professors in the Faculty, as well as equal representation in the faculty leadership. 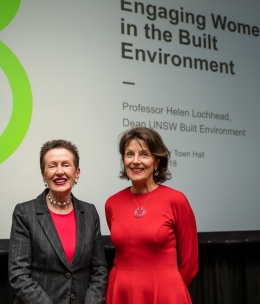 The women in leadership goal is one of the reasons she has been awarded the 2019 Paula Whitman Leadership in Gender Equity prize by the Australian Institute of Architects [AIA].

The AIA jury awarded the prize to Professor Lochhead not only for her outstanding and determined individual contribution to the advancement of gender equity in architecture, but also her leadership across education, research, advocacy, policy development and community engagement.

The award also recognises Professor Lochhead’s personal initiative in the UNSW Engaging Women event, which profiles female Built Environment professionals and has connected more than one thousand women in the industry.

“One of the reasons for developing Engaging Women was to profile the many diverse career paths women take and their multifarious achievements, because there’s no one way of attaining your goals. Success looks different for everybody,” she says.

Professor Lochhead says women shouldn’t be sidelined or denied the recognition they deserve because they take different paths to traditional male career paths, through choice or circumstance.

“I’ve mentored many young women and it’s often a complex juggle with competing agendas, especially when you have younger children. You’re trying to get your career on track and then there’s school holidays and a mortgage to pay. There are always competing pressures. I also know that you can do it all, but you just may not be able to do it all at the same time.”

The recently appointed President of the AIA says she was also involved in reframing the constitution and the composition of the AIA board so that it now has equal numbers of men and women, plus a female CEO.

At the NSW Government Architect’s office where she was deputy Government Architect, she introduced more merit-based processes such as design competitions, so projects were awarded on merit not position. The professor also introduced equitable workplace practices so that part-time architects returning from parental leave could fairly participate in projects based on their ability, rather than their availability.

“When you’re in a leadership position, it is these kinds of initiatives where you can change the paradigm enabling people to have opportunities which they wouldn’t normally have.”

The architect, urban and landscape designer has a long list of career accomplishments. She has held a number of influential positions on government panels, commissions and boards and in the NSW government and the City of Sydney. She has combined professional practice and teaching as an Adjunct Professor at the University of Sydney and has also been a visiting academic at Harvard, MIT and Columbia Universities.

She has also won numerous awards and has recently been recognised for the Master Plan for the Harold Park redevelopment, completed when she was at the NSW Government Architect’s office. The project was awarded the Lloyd Rees Award for Urban Design and the Lord Mayor’s Award at the 2019 AIA Awards in Sydney.

Interestingly, the professor says she never consciously wanted to be an architect.

“I was good at art and also maths and science, so I was steered into it,” she says. “I had a very limited understanding of what an architect did until I studied architecture – and then I loved it. I’ve never regretted the choice I made or, for that matter, a day of my professional life.”

At least 15 women from industry and academia will speak at the Engaging Women in the Built Environment event at Sydney Town Hall on Monday, August 12. Register for the event.