After witnessing the rise and fall of many empires, the ancient archelogical site of Palmyra is under threat from Islamic State and may well be destroyed, writes Phillip George. 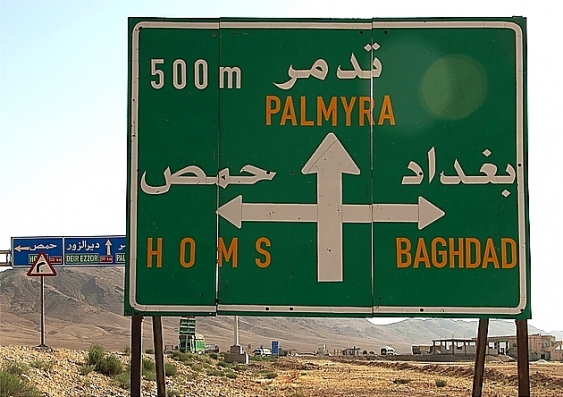 OPINION: “Surpassing disaster” is a term the Lebanese artist, writer and film theorist Jalal Toufic coined as Lebanon emerged from years of catastrophic civil war in the early 1990s. When I asked him for the meaning of the term, he said it was when there is a disaster then things get much worse. “Surpassing disaster” is embodied by the surviving population of Syria.

News outlets in recent days have been reporting that the archaeological site of Palmyra – some 215 kilometres north-east of the Syrian capital Damascus – is under threat from Islamic State. News continues to mount of civilian casualties, conflict deaths and executions.

Before looking at the prospect of the destruction of this World Heritage site, however, the disaster the Syrian people endure every day must be acknowledged.

One of the most compelling images of the Syrian civil war so far is the photograph below credited to the United Nations and Associated Press. The image of Palestinian refuges lining up for food aid in the bomb-ravaged neighbourhood of Yarmouk, a refugee camp housing the largest Palestinian population in Syria, opens a small window into the nightmare that is contemporary Syria.

Palestinian and Syrian residents of Yarmuk Palestinian Refugee Camp crowding in a destroyed street as food is distributed, in Damascus. EPA/United Nation Relief and Works Agency

Militarised factions from the Free Syrian Army to Islamic State have fought to claim the camp. As the disaster continues, these Palestinian refuges have now become Palestinian/Syrian refuges.

In Syria and across the Middle East histories have overlapped in this way for thousands of years. This cradle of civilisation is rich in landmarks, artifacts and the cultural traces of empires past and present. The citizens of Yarmouk, for example, find themselves in their current predicament thanks to a set of consequences set in train by the end of the second world war.

Palmyra bears the traces of many histories. It is now witness to an attempt by Islamic State to establish the next empire, a 21st- century Caliphate.

In 2005 I travelled to Palymra, which is located adjacent to the modern city of Tadmur in the Homs province of Syria. One of the images I made then documents these traces of history: in the foreground, the rubble of multiple empires is mixed together and ground into dust.

To the left of frame, the fusion between the local and Greco-Roman colonnades, to the right on top of the steep hill, the Mamluk Castle named Fakhr-al-Din al-Ma'ani. On the hill to the left of the castle there is a Syrian Army communications tower, which was controlled by forces loyal to Bashar al-Assad and is now in the hands of Islamic State.

Occupation of the oasis of Palmyra can be dated from Neolithic settlements; nomadic tribes made the area a station for trade. Later it became a caravanserai. The city is located on the major trade routes that ranged from Europe to China, north to the Black Sea and south to Yemen.

To list the peoples that passed through the area is to list half of humanity. Amorites, an ancient Semitic speaking tribe, were located in the area. The Assyrians, Hebrew tribes, the Seleucid Empire, the Sassanid Empire, the Roman Empire, the Byzantines, Crusaders, the Rashidun Caliphate, Ummayad and Abbassid Empires, the Maluks, the Ottoman Empire, Arameans and Amorites. Arabs, Jews, Greeks and Persians have all left their marks in Palmyra.

A second image (below), made from the vantage point of Fakhr-al-Din al-Ma'ani Castle, offers a panoramic vista over much of the extensive site.

In the far distance, left of the frame, are the famous Palmyra palm trees. Just to left of those are the colonnades and the agora, to the right of the agora excavation holes left by tomb robbers and archaeologists. To the right of frame are the towering tombs of the necropolis.

Standing at Fakhr-al-Din al-Ma'ani Castle it is easy to imagine the vast sweep of tribes, traders, invaders, pilgrims, colonisers and empire builders as they swept through the area. The view back in time stretches for millennia.

The site is now once again witness to an invasion – and this one could be its last.

American historian Robert D Kaplan argued in his 2013 book The Revenge of Geography that geography really matters. The mountains of Afghanistan neutralised American technological power. By contrast the vast flat lands of the Arabian Peninsula, according to Kaplan, need a “strong man” to rule them.

At Palmyra great empires sweep past and hold on for a time until they are supplanted by a stronger, more brutal empire.

Saddam Hussein was such a strong man. He was liquidated by Paul Bremer, George W. Bush’s man on the ground in Iraq – who also sacked almost everyone in the Iraqi Ba'ath party, including the Army of Iraq and its Ba'ath party leaders.

History overlaps. The military leaders of the Ba'ath party are back – and now they lead Islamic State and are fighting the military wing of Bashar al-Assad’s Syrian Ba'ath party.

Palmyra is a desert town easier to capture than hold. The disaster for human history is that to take back Palmyra, it may well be destroyed in the fighting.

Smoke rises after a rocket attack near the ancient oasis city of Palmyra. EPA/STR

The Northern Sinai is a site that is home to another Islamic State franchise.

Far from the control of Cairo, it’s the location of a site significant to all the Abrahamic traditions: Mt Sinai, the place where Moses is said to have received the Ten Commandments. Located at the base of the mountain is St Catherine’s Monastery.

Among its many treasures is the Achtiname of Muhammad, the testament of the Prophet Muhammad granting protection and other privileges to the Christian monks of Saint Catherine’s. One wonders if or when Islamic State reach this place they will take notice of the Prophet’s testament.

From epic storm pics to fairies in the garden, be careful with images