Opinion Kintsugi and the art of ceramic maintenance

We tend to throw away broken things, but the Japanese art of kintsugi – repairing broken ceramics with gold and silver – can give us a different perspective on waste, writes Guy Keulemans. 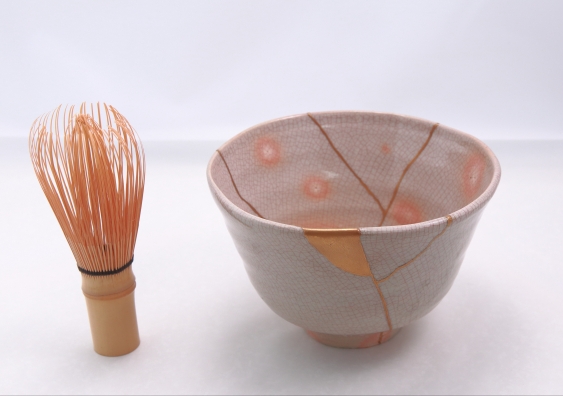 OPINION: Kintsugi is the traditional Japanese craft of repairing broken ceramics with “urushi” glue and gold or silver dust. It expresses the Japanese principle of “mottainai”, a concept for the regret experienced from waste. It’s significant for being a rare traditional form of “transformative” repair, or repair that intentionally changes the appearance of an object.

Photo of a school yard in Sendai city after the 2011 Tōhoku earthquake. K_TN72/Twitter

The visual style of ceramics with gilded cracks is highly regarded in Japan, and has been said to “diagram” the forces that shatter them. In a recent paper, I argued this recalls and develops from the Japanese experience of earthquakes. This suggests there is a new way of understanding the emerging international interest in contemporary forms of transformative repair as a response to cultural and environmental conditions of waste.

The appreciation for visibly repaired objects contrasts with Western repair practice. In the West, repair is typically intended to be hidden. One can understand that if you crash you car, you might not like it repaired with its repair visible. It might reflect poorly on your driving skill, for example.

However, the problem is that a stigma of repair has stuck to the fixing of all sorts of objects. I suspect it reinforces a requirement of the consumer society: a desire for box-fresh, scratch-free products. To avert the considerable contemporary problems of waste and landfill, we should become more tolerant and appreciative of repaired products.

This is the lesson of kintsugi: through the careful addition of gold and silver, objects becomes more beautiful than they were before they were broken, reversing our expectation of repair. This is the rationale behind my current research project and exhibition, Object Therapy, a collaboration between the UNSW Art & Design, the ANU School of Art, and Hotel Hotel’s Fix and Make program. We have connected the owners of broken objects with professional artists and designers working to an open brief of “transformative repair”.

Kintsugi mainly developed from the beginning of the early 17th century Edo period, but its use of urushi – a glue-like sap extracted by tapping the lacquer tree Toxicodendron vernicifluum – to repair ceramics dates back to the the pre-historical Jōmon period.

Kintsugi also has a basis in the re-evaluation of broken objects that took place during the tea ceremony development of the Azuchi-Momoyama period. In one story a guest, Shō-ō, arrived for a tea ceremony with a small hammer smuggled inside his robe. With this hammer he intended to smash off the handle of a flower vase he had seen purchased by his host, the famous tea master Sen No Rikyū. He knew Rikyū would display the vase, but thought the handle lacking in taste. Upon arrival, he discovered that Rikyū had already broken the handle himself.

The story of Shō-ō’s hammer is remarkable for the tolerance shown to a guest intent on wilful damage to a host’s possession. (I sometimes wish I could use a hammer to inflict similar damage to my friends’ Ikea furniture).

The story is also remarkable for the radical re-appreciation for broken objects it illustrates. In the context of the East Asian region, broken objects were traditionally considered inauspicious. Such aesthetic reorientation was a response to the terrible emotional and material consequences of the Sengaku period of war (c. 1467–1603). It is the pre-condition for the later popularity of kintsugi repaired ceramics.

However, the enduring success of kintsugi is based on other factors. Firstly, the wholly Japanese process “rebranded” imported Chinese and Korean ceramics. These imported ceramics were often made with unknown techniques. Kintsugi counter-techniques, such as infilling missing shards with bulk urushi decorated with Japanese patterns, augmented its rebranding.

Secondly, and not coincidentally, the rising popularity of kintsugi corresponds to an increasing awareness of seismic activity in the region. This cultural understanding of how Japan was beset by earthquakes is documented in government record keeping.

This torn kimono-style gown was worn by Fiona’s mother and found among her possessions after her death. It was remade into a pillow by Louisa de Smet and Steven Wright of Corr Blimey. Author provided

There is a visual similarity to the cracks of kintsugi and the cracks of earthquakes, but this is not the basis for the relationship. More consequential is the “affective” similarity they share. This is the general “sense” of a breaking force mediated by the appearance of cracks. Dressed with gold and reduced in scale to a small object that can be held in the hand, the force of the earthquake becomes manageable and less dangerous in perception.

This miniaturisation of natural forces is an aesthetic theme of the tea ceremony. It connects the wider, expansive qualities of nature outside the tea house. The power of mountains, rocks and fire, and the surge of rivers and waterfalls, are, for example, captured by the rustic texture of tea bowl glazes and the delicate rituals of boiling and pouring water.

Kintsugi ceramics are traditionally used in tea ceremonies too, at the beginning of winter, after the last tea harvest. This is a time when villagers help each other prepare for winter, such as by collaboratively re-thatching roofs. This is sensitive time for the Japanese. It connects to the aesthetic of “mono no aware” or the impermanence of life.

In this regard, kintsugi ceramics act as a device to ameliorate the fear of catastrophe and fortify a desire to prepare for it. It was illuminating to discover during the research for my paper that one contemporary kintsugi practitioner has seen an upturn in business since the devastating earthquakes and tsunami of 2011.

This toy action figure of Steve Austin, the 6 Million Dollar Man, with missing limbs and more, was repaired and dressed up by paper artist Benja Harney. Author provided

As part of the human research for Object Therapy, we interviewed members of the general public that had submitted a range of broken objects. With repair industries on the decline, people are in more need than ever for new ways of fixing things. Our research shows such a lack of repair options can be troubling for some people.

While DIY, home-based repair, has become increasingly popular in recent years as a response to the pressures of hyperconsumerism and waste, it is not a viable option for all. It can take time to learn technical and creative skills of repair. Polished results may be hard to obtain. But professional artists and designers have such skills already, even if they are not necessarily familiar with repair. So we we asked artists and designers to transformatively repair the broken objects we collected. This includes transformation of these objects’ appearance, but has extended to include changes to the objects’ function, or social or contextual significance.

Our 31 Australian and international “repairers” have worked on a range of objects for the upcoming exhibition (and eventual return to their owners) that reflect a cross-section of products in the consumer landscape. They include many speculative approaches to transformative repair. Informed by interviews with owners, our repairers have responded with propositional works that span from the thoughtful, refined and beautiful, to the provocative, critical and radical.

Such works go well beyond the traditional stylistic constraints of kintsugi. They may not yet form any culturally embedded practice. But my hope is that they inspire new solutions to waste and obsolescence that are both practical and appealing, and redress the troubling affects of living in the era of hyper-consumption.

Object Therapy opens at Hotel Hotel in Canberra on the 14th October, with panel discussions at UNSW on the 20th October and ANU on the 27th October.

Guy Keulemans is an Associate Lecturer in Art & Design research at UNSW.