UNSW researchers Linda Corkery and Kate Bishop are calling for radical change in the way we design cities for our younger citizens. 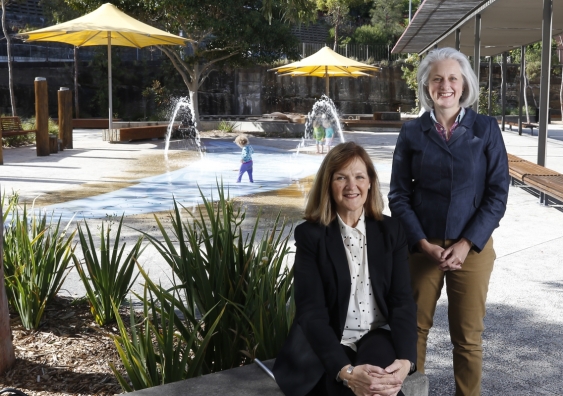 You’ve both been involved in numerous consultations with children around urban planning. How does it work?

LC: It’s better to think of it as co-design rather than simply consultation. We use a range of techniques depending on their age, including inviting them to draw their vision of a playground or outdoor space. Even very young children have plenty to contribute to a design process. Stockland, one of the biggest residential developers in Australia, recently involved kindergarten-age children in one of their design processes. So we are starting to see it happen, but not as routinely as we’d like.

What are the most common things children draw?

KB: Real grass, trees, sunshine and open sky. What’s most interesting is that a child might draw a park with swings and climbing frames but when you talk to them it’s not about the play equipment. It’s the human connections they develop in those parks that are meaningful, like picnics with their family.

When did “child-friendly cities” become a priority for built environment professionals?

KB: Well, I’d argue that it’s still not enough of a priority. The concept of child-friendly cities was first introduced by UNICEF in the early 2000s and before that the 1989 Convention on the Rights of the Child championed children’s participation in all social processes that affect their lives. Despite this, we haven’t seen a shift to involving children in urban planning and design.

Why has change been so slow?

KB: It requires a huge attitudinal shift towards recognising children as citizens in their own right who need to be considered at all levels of urban design. Building playgrounds and skate parks and saying “here you go” just isn’t enough. We need to shift our thinking around the presence of young people in cities and provide for them.
LC: We also need to view children as being capable and competent. As a society we often demonise young people or treat them as vulnerable and fragile.

As our cities become more overpopulated, do you think outdoor spaces will become increasingly important?

KB: Definitely. We’ll see more of our private lives happening in public spaces because our front and backyards are diminishing. Many of the opportunities to go and play outside have gone. There will be more pressure on public space to do more, for more people.
LC: And unfortunately, some large-scale, inner-city residential developments have body corporate by-laws that restrict kids’ use of shared outdoor spaces, with signs like “No Children or Dogs”.

What should urban planners and designers be doing differently?

KB: They need to stop thinking that, because they once were kids and have kids, this alone qualifies them to know what children want. Our own reference points are not enough to understand how children today are experiencing life. We need to talk to them.
LC: And public consultations need to be more extensive and inclusive. Communities as a whole often feel that developments get pushed through without their involvement, let alone children and young people having a say.

How would you like to see Sydney develop as a child-friendly city?

KB: We have willing councils who have adopted processes for developing child-centred environments but they’re reliant on individuals championing the cause. We need to replace this approach with an institutional culture that regularly sees children involved in co-designing the projects that affect their lives.
LC: Our book title is designing cities “with” children, so we can go “beyond” simply providing the stereotypical environments.

Designing cities with children and young people: Beyond playgrounds and skate parks, co-edited by Dr Kate Bishop and Associate Professor Linda Corkery, from UNSW Built Environment, will be published by Routledge in 2017.