Inspired by the recent bushfires, the Australian AI-generated song samples koala, kookaburra and Tasmanian Devil calls to give it an authentic Australian character. 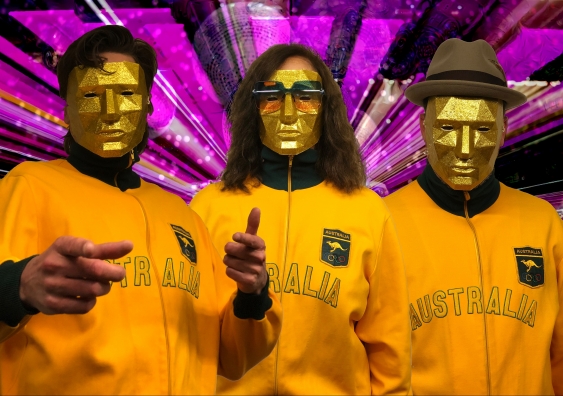 Team Australia all geared up for the AI Song Contest in their 3D-printed masks and Australian Swim Team tracksuit dating back to the 1972 Munich Olympic Games. Photo: Uncanny Valley

A team of Australian music producers, data scientists and academics has come together to create the Australian entry into an international AI Song Contest in the style of Eurovision.

The song, Beautiful the World, uses artificial intelligence algorithms trained on past Eurovision songs and the calls of the Australian wildlife to give it a unique Australian sound.

The team, all members of music-tech collective Uncanny Valley, will compete against other teams from across Europe for the best new Eurovision-like hit created with the help of artificial intelligence. The competition, organised by ​Dutch public broadcaster VPRO, will be judged by a panel of experts, with the global public encouraged to vote online to influence the winning AI song.

The Australian entry was inspired by the bushfires that devastated the country earlier this year taking the lives of many native animals. The song uses audio samples of Australian animals including koalas, kookaburras and Tasmanian devils, and its message is one of hope – that nature will not only recover but triumph, the team says.

Contestants provide details about their creative systems and processes, and this encourages knowledge sharing as well as allowing for the systems to be objectively evaluated, he says.

“It can be a problem in this field for people to just say “listen to this great music made by machine” and to let the music alone speak for the quality of the computational system that’s been used,” he says. “But you never really know what you’re hearing until you’re able to examine the system and see what it actually does.”

The decision to use “actual audio output, generated by an [algorithm] trained on Australian animals,” sets the Australian entry apart, says Caroline Pegram, producer and strategist at the music-tech collective. This came out an Uncanny Valley project with Google’s Creative Lab in Sydney, which uses machine learning to advance music innovation.

Beautiful the World takes a “co-creative approach”, pairing human input with algorithms. While an artificial intelligence algorithm trained on past Eurovision songs was solely responsible for the melody and the lyrics of ​Beautiful the World, the team used both a producer and real vocalists to bring the song to life.

“We like to collaborate and rage with​ the machine​s,” Ms Pegram says.

The AI algorithm used a “predictive model” or “a system that is designed to try to predict what the next note should be in a musical sequence, given one or more preceding notes,” Dr Bown says. “It’s exactly the same concept as trying to predict the closing value of the stock market tomorrow based on the previous week’s values.”

The creativity comes in with when you are choosing what to train it on and under what conditions, he says. “If you train the predictive model on Bach’s music, it will be more Bach-sounding. But the approach is limited: it’s nothing like building a model of Bach’s creative process.

“In fact, it can be quite anti-creative because it is trying to do the most “expected” thing it can. There are many ways around this. That’s the creative part of making generative music.”

Above all else, the song had to be fun. “This is an intrinsic aspect of the Eurovision Song Contest,” says Charlton Hill, co-founder and Head of Music and Innovation at Uncanny Valley, “but it’s also in the team’s DNA. It had to be the kind of song you could play on your guitar around a campfire.”

Dr Oliver Bown​ ​has collaborated on creative technology projects with electronic music heavyweights such as Aphex Twin and Four Tet, while Justin Shave, co-founder of Uncanny Valley, has produced songs for renowned artists including Sia and Darren Hayes.

“It is deeply interesting to watch an algorithm discover patterns that underlie music, those which we as experienced listeners find so natural, yet so difficult to describe when prompted,” Dr Wright says. “These algorithms can then generate fundamentally new sound, with at times startling clarity.

"This is certainly an exciting time to play in the field of generative audio, exploring the potential of new tools and ideas developed during this renaissance in artificial intelligence research, enabling a level of creativity that would have been unimaginable even 5 years ago."

“In reality, AI-generated music offers a complex and imperfect and highly original terrain of exploration that is opening up new types of interaction for music makers,” Dr Bown says.

The AI Song Contest is organised by VPRO in collaboration with NPO 3FM and NPO Innovation. The winner will be announced on May 12. To vote, please visit the VPRO Broadcast site.