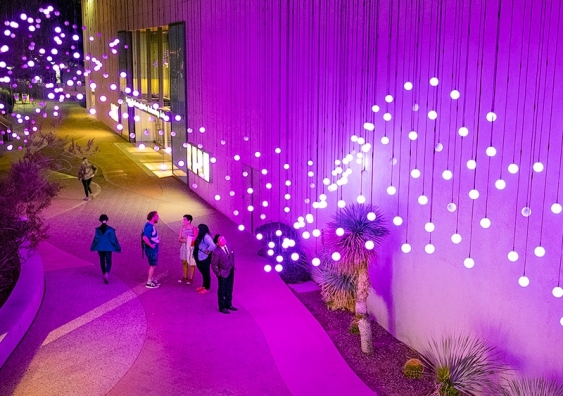 When describing the inspiration behind the large-scale immersive sculptural sound and light installation currently on show at the Scottsdale Museum of Contemporary Art in Arizona created by Squidsoup, Dr Oliver Bown explains that a murmuration is the term for a sizeable flock of birds that move in unison to stunning effect.

To help achieve the swooping effect of the flock, Murmuration is made up of over 700 small illuminated orbs that are suspended to loop and weave around the museum walls with each orb containing a tiny speaker that emits high frequency sounds in synchronization with the movement of light.

“The concept of the work is very loosely to take this idea of a murmuration of birds and to portray that as a sonic experience,” says UNSW academic Dr Bown who is the projects’ conceptual collaborator and sound designer.

“So, the unit’s that Murmuration is made out of are all little light and sound computers and Squidsoup have built a system where we can coordinate those and make them work together,” he says.

“The important thing is that they’re all around you, so you immediately get the sense, when you hear it, that you’re immersed in sound. When you’re standing in a forest or a busy street, your experience is always like that.”

With Murmuration, you can view and experience it from many different scales; from far away and across the street from the museum or in amongst the devices and up close.

“It’s not actually technically an interactive work. It’s an immersive environment so in that sense you can get in amongst it and explore the spatiality of the sonic experience.” Dr Bown says. “The idea is to create environments and to think almost like architects about the way that we create art experiences.”

He worked on the project in collaboration with British design collective Squidsoup and with lead designer Anthony Rowe.

Dr Bown has been closely involved with Squidsoup for many years including at the conceptual level of developing creative technology concepts. A recent ambition of the team has been to make large multiplicities of sound and light come together in a collective work as is done in Murmuration.

This year, he also collaborated as an interactive sound designer on an installation created by Wade Marynowsky called The Ghosts of Roller Disco where each roller skate was a mechanised, robotic unit. The sound design was also done in collaboration with electronic music artist Eve Klein.

“I’m quite into the idea of music, through computational technology, but also through more traditional types of technology, being able to be incorporated into many more things and types of experiences,” he says.

He explains that one way of expressing this is the idea of ubiquitous music or musical design becoming part of the language of everyday experience. Technology enables us news ways of doing this, he says.

“It’s particularly interesting in architectural and spatial environments where you get the opportunity, not just to compose music that someone listens to or observes, but almost compose the entire environment.”

All the music that he works upon is rendered on computers. This work is not about musicians playing music but rather about speakers, he says. Despite this, he does use non-electronic sounds such as recorded instruments and natural sounds that he incorporates into sound palettes.

“When you’re interested in music tech, you’re automatically blurring the boundaries between the design of your musical creations and performance practise.”

The UNSW academic and digital media artist has always focused on technology as part of his creative background in music.

Last year, in collaboration with members of the Interactive Media Lab and the band Tangents, he created Spiral for the Museum of Applied Arts and Sciences which was, “a contemporary reflection on the mechanical musical instruments of old.”

Similarly to Murmuration, the speakers in Spiral use custom technology to run music programs across multiple networked devices.

Murmuration is on show at the Scottsdale Museum of Contemporary Art in Arizona until May 3, 2020