A reimagined Greek agora, inspired by ancient mythology and 1960s French cinema, is one of dozens of student design projects and innovations at UNSW's Luminocity 2016 exhibition. 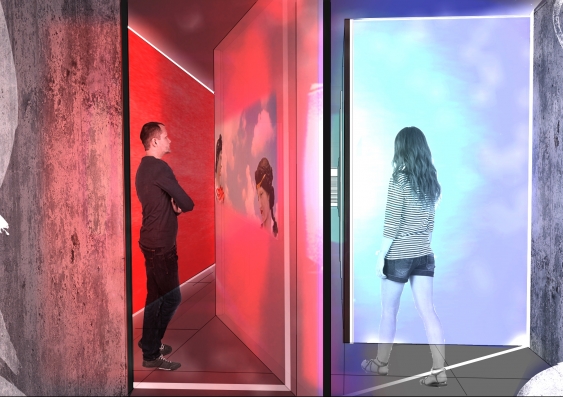 A reimagined Greek agora, inspired by ancient mythology and 1960s French cinema, is one of dozens of student design projects and innovations at UNSW's Luminocity 2016 exhibition.

Luminocity is the annual UNSW Built Environment event showcasing the creative works of students and alumni from all program areas, ranging from architecture and city planning to construction management and industrial design.

Lauren Rutstein is a third-year student in the Bachelor of Interior Architecture (Honours), and the recipient of the Built Environment Scholar Award.

Her design concept, Labyrinth, turned a pedestrian staircase and tunnel in The Rocks into a modern-day gathering place for people of Greek descent in Sydney, complete with a cafe, gallery space and cinema.

The agora was the central feature of ancient Greek city-states and democracy, where people gathered for artistic, athletic, spiritual and political events.

"The task was to design a modern agora," Rutstein says of her second-year studio assignment. "We were asked to question what would be a new place for democracy in Sydney today, for those within the Greek community who were escaping the difficult economic situation in Europe."

As part of the assignment, the students were asked to focus on ways that cinema and the notion of "kitsch" could influence architecture and design.

Rutstein says the main influence for her work was the 1963 film Contempt, directed by Jean-Luc Godard. The pioneering French-Swiss filmmaker was able to “build tension in scenes through framing, and was also able to slow down time and space” to make the viewer feel as though they were amid the experience, she says.

Her project has drawn on some of those same techniques: “The intention was to create a public space infused with a spatial narrative, creating a cathartic path reflective of the Greek community’s identity – the tension they felt, and how it led them to escape the crisis abroad.”

Rutstein’s design uses walls in various ways to segment the space, creating a labyrinth effect throughout the tunnel – a nod to the myth of Theseus and the Minotaur.

The walls are designed to blur the boundaries between the public and private, as well as the political and social realms. They also serve to distort perceptions of the space’s openness, and enhance feelings of tension, she says.

Our students are using their creativity to not only enliven and transform our built environment, but to solve important problems.

Rutstein is excited to be featured at Luminocity 2016 and says she loves the sense of community at UNSW, particularly in her degree program.

"Everyone is very supportive which makes the experience worthwhile," she says. "Also each project we are provided with takes a new and unexpected turn. It’s exciting, challenging, and pushes us to think of the newest and most creative ideas."

Rutstein says she is continually impressed by the "diverse range of clever responses" that her classmates come up with for the same brief.

Luminocity will feature a range of award-winning designs, including a waterproof glucose-monitoring device that can be worn by diabetics during exercise, a textile fabric inspired by coral bleaching, and a portable dialysis machine to help people with kidney problems who live in remote areas.

Dr Laurence Kimmel, a lecturer of interior architecture and the coordinator of Luminocity 2016, says the event will give visitors a deeper understanding of the design process.

“Our students are using their creativity to not only enliven and transform our built environment, but to solve important problems,” she says. “This event provides a window to people outside the faculty into how our students develop their concepts, from idea to artwork to finished product.”

Luminocity 2016 is free to attend. More information can be found on the UNSW Built Environment website.