Art lovers have long pondered the identity of the mystery face behind the Ned Kelly mask in Sidney Nolan’s most iconic painting. 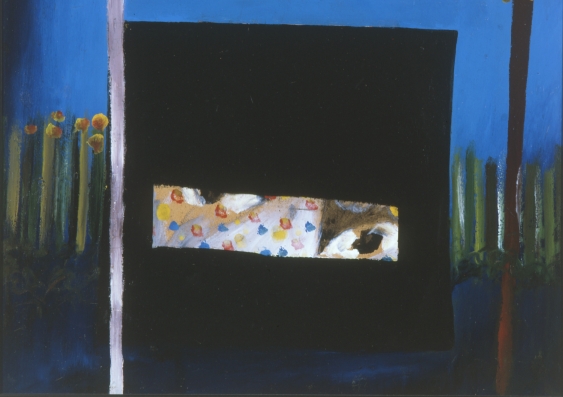 Ned Kelly: “Nobody knows anything about my case but myself” 1945, Heide Museum of Modern Art, Melbourne

Art lovers have long pondered the identity of the mystery face behind the Ned Kelly mask in Sidney Nolan’s most iconic painting. Now science and art have merged to reveal an upside-down portrait of Nolan buried under layers of paint in his 1945 work, Ned Kelly, “Nobody knows anything about my case but myself”.

Dr Andrew Yip, from the Laboratory for Innovation in Galleries, Libraries, Archives and Museums (iGLAM) at UNSW Art & Design, is part of a team of experts who worked collaboratively with the Australian Synchrotron to visualise the artist’s hidden face.

Yip worked with Paula Dredge, Head of Paintings Conservation at the Art Gallery of New South Wales (AGNSW) and Kendrah Morgan, curator at Heide Museum of Modern Art, in Melbourne, who worked with Synchrotron scientist Daryl Howard to identify the painting’s elements down to the finest brush stroke.

With powerful x-ray imaging, previously invisible layers of colour were revealed to show a face beneath the now-famous Ned Kelly helmet.

“The scans revealed a face behind the mask covered in red, yellow and blue dots that raises questions about the meanings of Nolan’s Kelly series,” says Yip. “We were able to recolour the scans to reconstruct how the portrait originally appeared before the mask was painted over it, by directly referencing Nolan’s own pigments, which are preserved in the conservation labs of the AGNSW.” 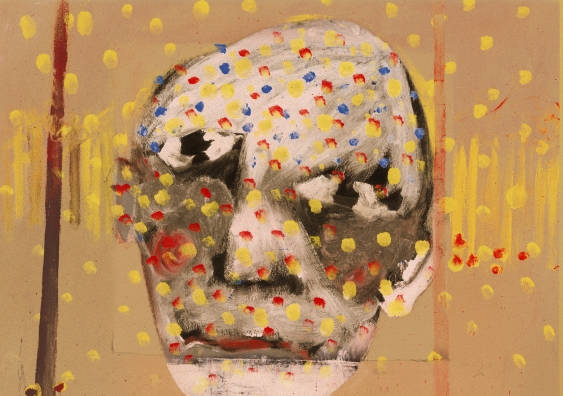 Digital colour recreation of the first stage of the painting based on x-ray fluorescence.

The newly discovered portrait has similarities with a self-portrait Nolan painted in 1943, while he was in the Australian Army. In Self portrait, now in the AGNSW collection, he wears strips of blue, yellow and red across his forehead, suggesting war paint.

By 1945 he had absconded from the army and was hiding from the authorities. Nolan’s identification with Australia’s best-known outlaw is suggested by the title of the work, in Kelly’s own words, and the portrait under the mask. Oddly, the artist turned the portrait upside-down and started again, leaving just the eyes pointing out from behind the helmet.

The original Ned Kelly painting and a virtual-reality reconstruction of the images underneath the surface developed by Yip, Dredge and Matt Nix, the digital designer at AGNSW, were exhibited at Heide this year.

“I think VR is a really valuable way to bring art history to life and tell important stories, as long as it is done sensitively."

Displayed in the former home of Melbourne art benefactors John and Sunday Reed, where Nolan lived in the early 1940s, the virtual-reality work allowed visitors to step into the library, a room where Nolan spent time researching his paintings.

“Viewers stood in the house where the original painting was made, and used the VR headset to peer through the painting, peel back the layers of Kelly’s mask and reveal the portrait underneath,” Yip says.

“The library is a really significant, ghostly space that’s pregnant with meaning – Nolan painted the Kelly series in the adjacent room”.

“I think VR is a really valuable way to bring art history to life and tell important stories, as long as it is done sensitively. This is also an example of how science can be used to convey the significance of art to a wider audience.”

The team is planning to develop the virtual- reality aspect of the exhibition further to include the literary history of Heide and its artists.

The exhibition was presented with support from UNSW iGLAM, Australian Synchrotron and the Art Gallery of New South Wales.