The acclaimed author appeared at an exclusive Centre of Ideas event on the Kensington campus. 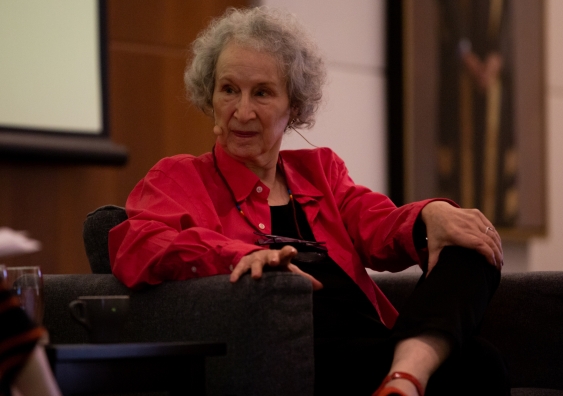 At the end of her appearance at UNSW Sydney, Margaret Atwood explained how she ended up writing the introduction to Lewis Hyde’s 1983 non-fiction book The Gift.

Hyde describes the book as being about the value of creativity and of its importance in a culture increasingly governed by money and overrun with commodities.

“It’s the only book I recommend to young writers,” the Canadian writer told a mostly female undergraduate audience.

“It’s about the difference between the gift economy which art exists in, and the money economy in which a work of art touches and has to pass through in order to turn back into a gift.”

“People trade stuff all the time, that’s how human beings go about their daily lives, and in The Gift you will read why,” Atwood said.

“If you're having trouble with your family, you shouldn't go home for Christmas – gifts are exchanged.

“And the difference between gifts and the things you buy is that if you receive a gift, you owe, either to the person that you received from or to somebody else.

“And with writing, usually you receive the gift from previous writers, you incorporate it and then you pass it on.”

The highly credentialed writer spoke with UNSW Literary Studies senior lecturer in the Faculty of Arts & Social Sciences Dr Fiona Morrison in an exclusive and intimate event presented by UNSW Centre for Ideas on Kensington campus.

The event followed a sold-out appearance at the Opera House the previous day.

Atwood has written 16 novels, eight collections of short fiction, as well as 50 volumes of poetry, children’s literature, fiction and non-fiction.

She is perhaps best known for her novels, which include The Edible Woman, The Robber Bride, The Blind Assassin, Oryx and Crake and The Year of the Flood.

Her television adaptations include the 11 Emmy award-winning Handmaid’s Tale and Alias Grace, while MaddAddam Trilogy has just gone into production.

“She is of course a great untold adaptor and revisor of works by others, including writers such as Homer and Shakespeare and is involved very much in finding new shapes and forms for your work as counsel, as commentator and artistic force,” Dr Morrison said.

Atwood said 18th and 19th century novels “were both happily quite female-centric” but noted a change particularly after the ’50s, when there was “a concerted effort made to get women back into the home after the war”.

“And to get them back into the home, [women] were told that their true nature, and the path towards fulfillment, is to basically scoop out their brain.”

She told the audience that “luckily I had a tomboy mother” who was “a very athletic person … a speed skater” and a scientist father, both of whom “weren’t interested in housework or gloves”.

'I think the scariest thing facing us is, should the ocean warm and acidify, that is kind of it for us.'

The world literary figure said her most terrifying dystopian plot was the 2003 self-described speculative fiction book Oryx and Crake, adding that she would “have had more plastic in the ocean writing it today”.

“So I think the scariest thing facing us is, should the ocean warm and acidify, that is kind of it for us, because it is the oceans that make 60% to 80% of the oxygen we breathe,” she said.

“If the life forms in those oceans die, you are oxygen depleted to begin with, and that will make us stupider.”

The author, who has a reputation for repudiating science fiction, was asked if she thought speculative fiction was an important genre to deal with contemporary political, economic and ecological issues.

“So speculative fiction says, ‘This is where we could go – is that where we want to live?’,” she said.

“If we don't want to live there, maybe not go there. Maybe rearrange the blueprint so that we're going to be in a different kind of future.”

Asked about the power of words and her favourite written sentence, she said, “It is true that words are very powerful, but they can be used negatively as well as positively … Donald Trump tweets words.”

Atwood said she got “a kick” out of writing really silly birthday songs for her friends and relations.

“Nobody dies, it’s fun to illustrate them,” she said, while also claiming to have written the world’s only home economics opera in 1956.

“For years people who were in it turned up for readings. They are dying off now … I used other people’s music, in fact the head of the Canadian Opera Company said that I ruined Hoffman’s Barcarolle forever.”