An array of forces are converging to give the multi-unit house of cards a shove, writes Chris Martin. 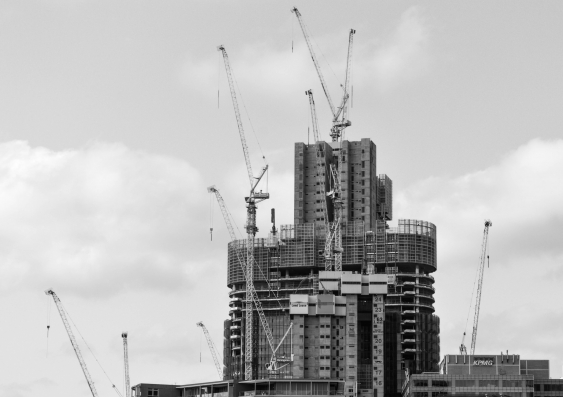 Crane numbers, in this case in Darlington, Sydney, are an indication of the number of new units coming onto the market. Francisco Anzola/flickr

OPINION: The Real Estate Institute of Australia (REIA) has unleashed the hounds on Labor’s proposed reforms to negative gearing. The REIA’s campaign, Negative Gearing Affects Everyone, follows the lead of the Property Council, which describes the Australian housing market as a “house of cards”, with the REIA stressing how “fragile” the Australian economy is. You might be tempted to dismiss this as propaganda from people who exaggerate for a living, but evidence is mounting of instability close to the REIA’s home: the off-the-plan apartment sector.

An array of forces are converging to give the multi-unit house of cards a shove. Over the past couple of years apartment development has boomed. The Australian Bureau of Statistics shows building approvals for new flats, units and apartments reached a huge peak last year. It has stepped down in the most recent quarter, but is still very high.

You can see this development in the skylines of our cities, especially in Sydney, Melbourne, Brisbane and Canberra – and in the RLB Crane Index. RLB counts a total of almost 650 cranes engaged in construction in our capital cities, and says more than 80% of these are on residential projects.

This coming supply is reflected in CoreLogic’s projections for new units hitting the market. It estimates that sales for more than 92,000 new units will be settled in the next 12 months, only slightly less than last year’s total number of sales of new and established units. The year after, a further 139,000 new units sales are due to be settled, substantially more than total sales (new and established) last year.

But for all this supply, it appears there may be much less demand than anticipated, particularly from the foreign investors who did so much to stoke the boom. Evidence for this includes:

Foreign demand for new dwellings (as gauged by the NAB’s Quarterly Australian Residential Property Survey) was already down over the first quarter of the year, before the credit restrictions cut in. Now the media are reporting that Chinese demand for apartments has “fallen off dramatically”: Meriton says the number of Chinese buyers of its apartments halved in the last month.

As those cranes in the sky indicate, there’s a lot of people out there – foreign and local – who’ve paid deposits and entered into contracts to pay boom-era prices on completion of their units. When they go to the bank to borrow the balance, they may find that, between lower loan-to-valuation ratios and lower valuations, they are caught short. Some might make up the difference by selling another property, but many of those settlements projected by CoreLogic may not settle at all.

The result: deposits forfeited, unsold units dumped on the market – accelerating the bust – and possibly, at least for buyers who are actually in the jurisdiction, the threat of being sued by developers for the loss of the contracted higher price.

Faced with such a calamity, why won’t our politicians do something to shore up demand for all these newly constructed rental properties? Oh wait….

This is precisely what Labor’s proposed negative-gearing reform promises do, by allowing rental losses to be set against non-rental income only where the property is newly built. Under Treasurer Bowen, Australia’s dedicated army of negative gearers would be given new direction and purpose, switching from the established dwelling market into the new-built market deserted by foreign buyers. Furthermore, because no-one after the first purchaser can call a dwelling new (and hence get the same preferential treatment on their gearing), they may be inclined to hang on to their properties even as demand looks weak.

We should still expect such a reform to reduce total investor demand for housing, and hence reduce house prices overall. These are both good things. But it may also help cushion what might otherwise be a drastic and painful collapse in the new-build sector.

Both the REIA and the Coalition government talk about Australia’s “transitioning” economy. They should consider negative-gearing reform as a measure for transitioning out of our presently fragile, property-bubble-led economy.