Aleks Danko’s art may be profound and passionate, but there is always a joke lurking, writes Joanna Mendelssohn. 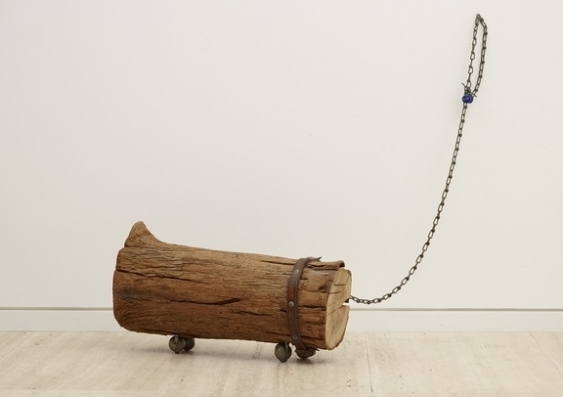 OPINION: In 1971 I went with some fellow students to see an exhibition, selected by the Swiss curator Harald Szeemann as his idea of the most interesting Australian art. Much of the exhibition is lost in the blur of time, but I remember Aleks Danko’s Log Dog.

A discarded shaggy log of wood on wheels, given a collar and lead, with the end of the timber cheekily evoking a tail – it had it all. Log Dog was radical art, but it was also fun. Other than the combination of creative imagination and punning humour on which it was based, I remember being a bit in awe that a 20-year-old had achieved such fame.

Australia in the 1970s was a place that rewarded talent and welcomed intellectual and cultural diversity. The children of the European boat people who had arrived en masse after the second world war were coming to maturity.

Their multicultural experiences, including a sense of disconnection from the mainstream, helped dislodge sliced-white-bread Australia.

In Aleks Danko’s case, although his Ukrainian parents ensured he learnt both their mother tongue and Russian, he had no English until he started school. Coming to English as a second language led to an appreciation of written words as concrete objects which can be deconstructed in different ways.

Objects are to be punned into symbols. Words can be dissected and distorted to change or multiply their meanings.

“What are you doing boy?” is an amalgam of archaic illustrations from a child’s primer, English phrases that do not relate to the image, and Russian. The work sums up the total absurdity of the codes of language and illustration. Aleks Danko’s art may be profound and passionate, but there is always a joke lurking.

That droll sense of humour is very much a part of the Danko family’s tradition. At the Museum of Contemporary Art (MCA) in Sydney, Mother or Father (1975) shows the centrality of his parents' experiences in developing his art. It is placed deep within the exhibition, near Some Cultural Meditations, a series based on the patterns of his mother’s traditional embroidery.

Danko’s father was a fitter and turner in a rubber factory. In his old age he would say:

As you know, we are pensioners, day in day out, 24 hours closer to death.

DAY IN DAY OUT is an idea worth repeating. In one large version a mass of block-like suburban houses constantly transitions from day to night, the spotlight sun casting ghost shadows on the wall. The houses are cyphers, a code rendered in three dimensions describing uniform suburbia in aesthetic shorthand. Danko found the shape in a cake tin which he recreated as a cast metal mould.

The words, DAY IN, DAY OUT were reprised in 1993 on one of the Melbourne art trams. That sense of monotony is a fair summary of the commuter experience.

Danko’s cipher houses keep recurring. In SONGS OF AUSTRALIA VOLUME 14/2 (here we turn everything into fun to kill time), red painted houses are plastered onto the walls of a large room. But each painting is inscribed with a slogan, as though all Australian suburbia is shouting out slightly distorted versions of the words they hear from those who claim to lead.

But inserted in the midst of these are sly comments: “DRAW A LIE IN THE SAND”, “ORDINARY AUSTRALIA, ORDINARY AUSTRALIANS”, “DUMBED DULLED AND NUMBED DOWN”. These are complemented by a giant poster version of Catherine Deveny’s Australian Citizenship Test.

Danko says he is now considering another work based on the Abbott years, as “Abbott is the master of political haiku”. It has not yet been realised – “I’m just collecting the evidence”.

Aleks Danko’s best known image, however, is not the child’s view of a house, but a face. When the MCA used Incident – Ambivalence to promote an exhibition of its collection the image went viral. It is the face of an idiot, mindlessly gazing, uncertain as to what it is seeing. The face has many incarnations.

In PHHHHIT HEAD it comprises ping-pong balls inserted into a takeaway coffee tray, while in TASTE a whole audience of hatted DUH-HEADS! look at a sculpture, not sure of what they are supposed to say/ see.

This is in part a comment on the 18th-century artist William Hogarth’s The Analysis of Beauty, which also criticised audiences for following fashion instead of looking at works of art. Danko believes in making his viewers work, to use their brains as a part of the act of seeing.

With that aim in mind it is probably unfortunate that his most popular exhibit is IT’S SUCH A THIN LINE BETWEEN CLEVER AND STUPID. The words are inscribed on a mirror. In this narcissistic age of Instagram, it is probably not surprising that self portraits taken with the mirror have acquired cult status.

So sad that the photographers don’t understand what the work is then saying about them.

ALEKS DANKO: MY FELLOW AUS-TRA-ALIENS is at the Museum of Contemporary Art, Sydney, until October 18, and at the Heide Museum of Modern Art), from November 7.

Joanna Mendelssohn is Associate Professor, Art & Design, at UNSW and Editor in Chief, Design and Art of Australia Online.