A study during last season’s bushfires provides vital insights into the multiple interplays between weather extremes and air pollution. 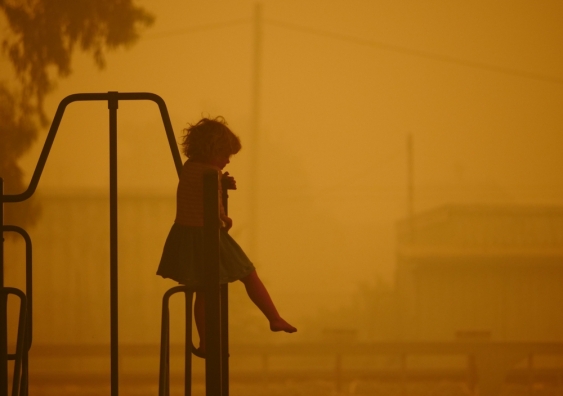 Research carried out at the height of the 2019/2020 Australian bushfire season demonstrates how the relationships between extreme pollution, heatwaves and drought exacerbate the impact of bushfires on urban outdoor livability.

The environmental and air quality monitoring campaign, a joint study from UNSW Sydney and the University of Sydney, found that specific combinations of air temperature and relative humidity were conducive to higher and lower levels of air pollution.

Air pollution was generally higher during the night and in the morning, especially after daytime temperatures above 35°C. Intense rain was found to cause the highest and most persistent dust levels. Despite their acknowledged air-cleansing properties, heavy raindrops trigger a mechanism that produces solid particles from soil, which can substantially raise local pollution levels.

The research, titled Experimental evidence of the multiple microclimatic impacts of bushfires in affected urban areas: the case of Sydney during the 2019/2020 Australian season, is the first to identify these interrelationships on a local scale under weather anomalies, such as bushfires. The study offers a new holistic approach to environmental monitoring.

“The size and destructive potential of the 2019–20 Australian bushfires shocked the world,” says senior co-author Scientia Professor Mat Santamouris from UNSW Built Environment. “In the duration of our study, some 186,000km2 was burnt – that’s almost the size of England.

“The fires claimed the lives of at least 34 people, destroyed nearly 5900 buildings and decimated the native wildlife.

“It is crucial we have a better understanding of the potential consequences of an increased rate and extension of bushfires, especially to improve our risk preparedness and subsequent coping strategies.”

A compact meteorological station in Petersham, in Sydney’s Inner West, monitored conditions from 20 December 2019 to 13 January 2020, when hundreds of fires were burning at Sydney's borders.

During this time, extreme pollution, heatwaves and drought were recorded simultaneously. The PM10 content, that is microscopic inhalable particles, reached a maximum of 160 μg m−3 (more than four times the level associated with good air quality), the temperature peaked at 46.2°C, and the accumulated rain was just 13.6mm (compared to 91.1mm, the mean rainfall in January over the last 20 years).

Wind gusts of more than 100km/h also resulted in unpredictable fire paths and extremely poor air quality in the nearby areas.

While long-distance transport and winds made it difficult to establish definitive correlations, the research identified strong dependencies between temperature and humidity levels that produced detrimental effects.

Lead author Dr Giulia Ulpiani, from the University of Sydney, says: “Interestingly, a strong interconnection between environmental parameters could be identified under the combined effect of bushfires, heatwaves and intense droughts.

“Particle air pollution tended to accumulate under specific thermohygrometric conditions [alignments in temperatures and humidity levels], especially after overheating episodes, as well as in response to strong sea breeze and heavy rain due to the dislodgement of fine particles from the soil.”

Correlations between UV radiation and concentrations of air pollution

Solar and UV radiation were also measured to quantify the degree of reduction that occurred under the thick layer of bushfire smoke that frequently blanketed the city during the observation period.

The research established a link between UV index and the PM concentration in the air. The study identified several PM thresholds above which UV radiation was strongly blocked out and below which the UV index was likely to surpass moderate levels.

The research further demonstrated this relationship using evolutionary AI algorithms, and supports previous scientific evidence of the ability for smoke particles suspended in the air to reduce UV irradiance.

The study also compared the urban heat island intensity during the bushfires to that recorded during the same period over the previous 20 years.

Prof. Santamouris stressed that “data from several BoM meteorological stations indicated an additional effect ascribable to persisting bushfires: the disappearance of cool island events and the exacerbation of the heat island intensity over the median.

“The results of our research are further confirmation that holistic approaches are evermore required in urban sciences, to discern the way the built environment evolves under climate changes and weather extremes.

“The associations we discovered would be extremely valuable in building up a cohesive national health protection strategy and encouraging better responsiveness from governments and city planners, the report found.”

The study was selected by the American Institute of Physics as an exceptional work and is published in the IOP Publishing journal Environmental Research.