Friendship as a Way of Life, the latest exhibition at UNSW Galleries, showcases the depth and diversity of queer kinship through its program of art, archival ephemera and in-conversations. 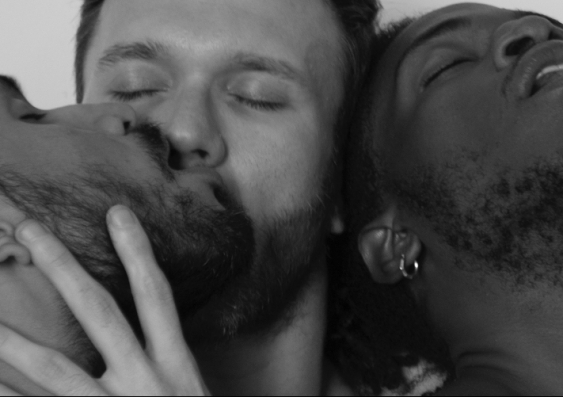 When Premier Neville Wran deferred on the decriminalisation of homosexuality in the 1980s, the Sisters of Perpetual Indulgence paid him a visit.

The Sisters, an order of queer men who dress in full habit, are known for their political activism. They descended on Oxford Street clubs preaching safe sex in the era of HIV, and picketed anti-abortion protesters outside pre-term clinics.

They parked their campervan, emblazoned the Gay Rights Embassy, on the Premier’s street, and Mother Inferior delivered a scathing litany in a cloud of incense. She cast out demons of homophobia and political expediency and pin-stripe suits (a fashion favourite of the Premier’s), chanting Gregorian style before an assembled audience of police and media.

This historic litany is part of the latest exhibition, Friendship as a Way of Life, at UNSW Galleries, that runs from 8 May to 21 November 2020. The exhibition charts trajectories of queer kinship — platonic, romantic, sexual and otherwise — in contemporary art, popular culture and archival material.

Some 40 years on from her litany for Neville Wran, Mother Inferior has launched the exhibition’s digital program, Forms of Being Together, with an exorcism to cast out contemporary demons and some blessings.

It seemed only fitting to have a representative from this formative group open the program, says Kelly Doley, Deputy Director of UNSW Galleries.

“The Sisters are part of the elders in our community,” says Doley, who co-curated the exhibition with UNSW Galleries Director José Da Silva.

“They're an example of the resilience of the LGBTQI+ community: of coming together, having a message, doing the work, getting on the street.”

The exhibition offers perspectives on partnerships, collaboration, visibility, sex, intimacy and knowledge that complicate the heteronormative.

The digital program expands the exhibition’s reach through a series of live keynote talks (Flesh Meet), artists in conversation, and performative offerings (Bedroom Eyes) played out on the Galleries’ social channels and newsletters. 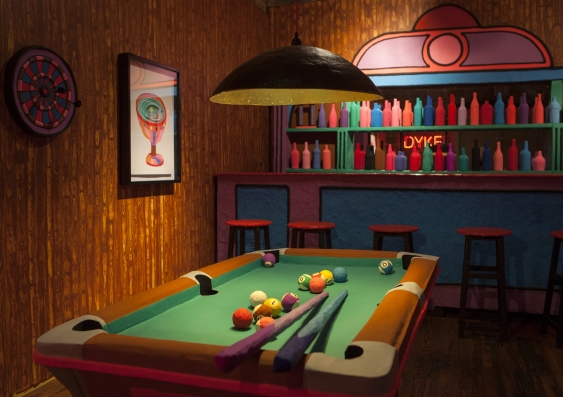 In memory of dyke nights past

Drs Kerryn Drysdale and Sophie Robinson from UNSW will look at lesbian social scenes in Sydney as part of Flesh Meet, echoing the salons of dyke nights past. “Presented in two parts, their live lecture series will provide an entry point to the histories surrounding works in the show like Eulogy for the Dyke Bar, which is looking at the closure of lesbian bars over time,” Doley says.

Eulogy for the Dyke Bar, an installation by American artist Macon Reed, functions as a sculptural environment in the style of bygone lesbian bars and community spaces. Visually beautiful and affecting, the bar is created using ephemeral materials.

It is “literally a bar with faux wood panel walls and all the fixtures of a bar like the bottles, jukebox and pool table but they are all made out of cheap materials like cardboard and joint compound that's then painted,” Doley says.

“The pool table doesn't work. There’s a jukebox and dart board, but it's all made out of this stuff ... so all the objects in the space are non-functional. There is a sadness to the space, and it feels like a kind of museum display or memorial.”

The installation will be situated within archival material of now defunct lesbian nights, parties and bars in Sydney and America. Including this material “draws attention to the local and historical aspect of the work. It is an ongoing issue: the gentrification of urban spaces where minorities start up their own spaces and then get pushed out,” Doley says.

An in-conversation with Macon Reed and researcher on the project, artist Jade Muratore, as well as the digital release of a mix of DJ Gemma’s music charting the DJ’s involvement in more than 30 years of iconic LGBTQI+ parties from Wicked Women to Club Kooky, will activate the installation in lieu of its use as a live space, while social distancing measures remain in place.

In celebration of untold stories of LGBTQI+ kinship

Doley and Da Silva developed the exhibition over 18 months, shaped by their desire to share the “untold stories, marginal histories, collaborative networks” of the LGBTQI+ community, Doley says.

“Queer people have had to – for survival or pleasure – come together to create their own networks and communities and forms of support throughout history.

“We wanted to situate historical pieces, ephemera and archival material with contemporary works to highlight this.”

The legalisation of gay marriage following the 2016 plebiscite placed the spotlight on the institution of marriage. The exhibition seeks to explore alternate networks outside the paradigm of biological family, to “complicate the narrative”, she says.

Helen Grace 'Amazon Acres, January 1979' from And awe was all that we could feel 2020. Black and white print from negative. Photo: Helen Grace

What really matters is care

Nayuka Gorrie will look at Indigenous queer kinship systems from their experience as a creative and an Indigenous person in Australia in one keynote. And Tim Roberts, a leather scene historian, will discuss the significance and social relationships around objects and things people wear, and the communities that exist in the Australian leather scene, in another.

Trans-activist poet ALOK gives an exclusive poetry reading of ‘Friendship is Romance’ from their home in New York for Bedroom Eyes.

And Helen Grace’s photographic documentation of Amazon Acres, an all-female community built around an ethos of no meat, no men, no machines, offers a unique insight into “an alternative to conventional familial structures,” Ms Grace said in a recent interview.

“[Amazon Acres provided] alternatives to the fact that women would marry and have children. A utopian world was realised in so many people’s lives in that period. Those alternative kinship structures that were established back then remain. What really matters is care.”

Forms of Being Together offers virtual tours of the Galleries as well as downloadable art objects: a collaborative font and art zines designed by Sydney-based graphic designer Ella Sutherland.

And with any luck, patrons will experience DJ Gemma in situ at Macon Reed’s Eulogy for the Dyke Bar before the exhibition closes in November, transforming the space from eulogy to a nucleus for creating vibrant new memories.