A cluster of synthetic trees that responds to the weather by pulsing colourful light will take over part of Sydney Harbour during VIVID. 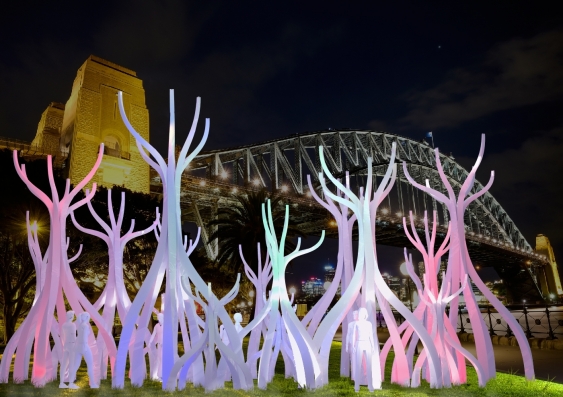 An installation that responds to the weather and echoes Australia’s native mangroves will light up Sydney Harbour during VIVID.

Designed by an international team that includes UNSW Built Environment students, Arclight is a cluster of 18 ‘trees’ made of polyethylene spanning an area of 10 x 15 meters.

Set amongst palm trees at the northern end of Campbell's Cove the installation can be viewed from the Sydney Opera House.

The installation senses these changes and expresses them through LED lights inside the ‘tree branches’ which move and pulse in blues, greens and magentas.

Associate Lecturer in Computational Design Rebekah Araullo said it was “beautiful to see” students learning from each other.

“The original plans for Arclight changed a number of times so the students needed to be very adaptable and find ways around problems quickly – they achieved that by working together,” she said. 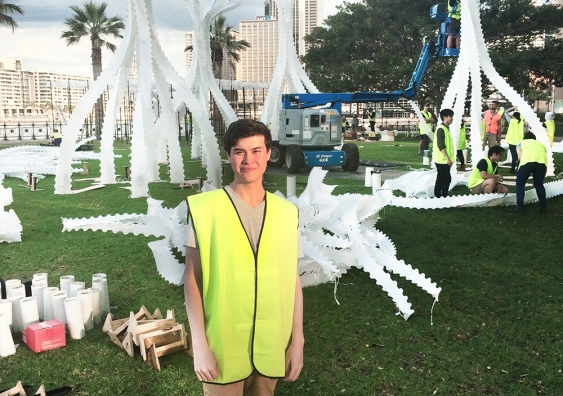 Arclight project manager and second-year computational design student, James Stevenson, said he never imagined he would have the opportunity to work on such a large-scale public art project during his degree.

“I thought my degree would be completely architecture focused,” he said. “But working on this project has really broadened my horizons and made me realise that design possibilities are endless.

“I moved from Melbourne to take this degree – I’ve always been interested in technology, software and hardware, as well as architecture. This was the only degree I found in the whole country that combined all my passions,” he said.

UNSW Built Environment was one of the first universities to introduce computers to architecture. The Computational Design degree integrates digital fabrication using laser cutters, 3D printers, software like Grasshopper for parametric modelling, or the use of gaming technologies like the Oculus Rift.

VIVID Sydney 2015 opens Friday, 22 May at various venues around Sydney.