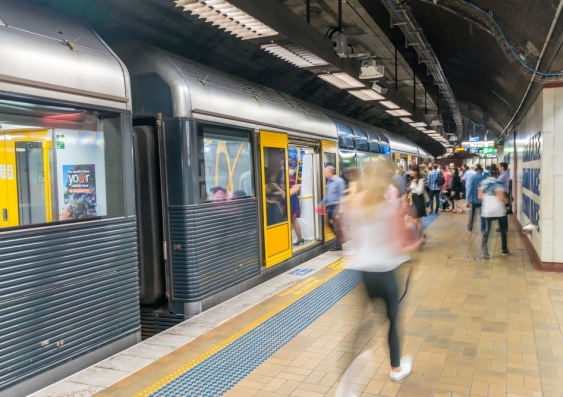 Only 39% of public transport trips to Sydney's CBD in the mornign peak are comleted within 30 minutes. Photo: Shutterstock

In 2008, the world reached a “tipping point” when more people were living in cities globally than in regional and rural areas. The UN forecasts that by 2030 more than 60 per cent of the world’s population will be urban dwellers.

In Sydney, it’s expected the population will reach around 6.2 million by 2036 and in another 20 years it will be up to eight million.

Pettit is leading a team of five colleagues across the PLuS Alliance universities; a collaboration between UNSW, King’s College London (KCL) and Arizona State University (ASU). They have just received seed funding for their project, 30 minute City - Understanding the Land Use-Transport Nexus, to help tackle this issue.

The researchers are using big data to analyse how people commute by cycling, walking, public transport and car in their respective cities (London, Phoenix and Sydney) and how this data can inform the design of more accessible, liveable and sustainable cities in future.

To chart people’s current daily commutes, they are working with data gathered from Smart transport apps and GPS, as well as Opal card use in Sydney and Oyster card use in London (cards used on public transport).

Using the opal card data (tap on and tap off) the UNSW research team have been analysing public transport commuting behaviours across sixteen employment centres across Greater Sydney.

Probably, our goal of ‘30 minutes’ is aspirational, but the idea is to build cities where the goal of future land use and multi-modal people movement is to get as many people as possible to have a 30 minute (or less) commute to work every day.

The research shows that over three times as many trips are made to the Sydney CBD for work than any other employment cluster with nearly 250,000 trips made in the morning peak time between 7:30 and 10am. Of those trips 39 percent are made within 30 minutes.

In comparison, trips to Blacktown totalled 6,000 trips yet 75% of these took less than 30 minutes.

“Using big data we can look at fine scale travel behaviours and begin to understand the current state of play, and the future implications of planning policies,” Pettit says.

Each of the PLuS Alliance universities has experts in relevant, complementary areas, says Pettit: KCL leads in air quality monitoring, ASU is skilled in advanced geographic modelling while UNSW excels in housing dynamics.

“Probably, our goal of ‘30 minutes’ is aspirational, but the idea is to build cities where the goal of future land use and multi-modal people movement is to get as many people as possible to have a 30 minute (or less) commute to work every day,” Pettit says.

So far in 2016, the six academics from UNSW, KCL, and ASU have had three meetings. “Until this year, we’d never met before, so this coming together for the first time really super-charged all our research,” Pettit says.

For the next stage of their project, the academics are working on joint research grants to undertake comparative analyses between their three cities, write journal papers and start an international data store. The beginnings of this data store can be found at the CityViz dashboard on the City Futures website.

At the same time, UNSW is already collating case studies from Sydney, Phoenix and London to use in its new Master of City Analytics launching in 2018, with an MPhil and PhD starting this year. The long term vision is to offer online courses on the subject across all three universities in the near future.