Maryam Azam, Paula Abood and Roanna Gonsalves will talk about their work at a UNSWriting event on Wednesday night. 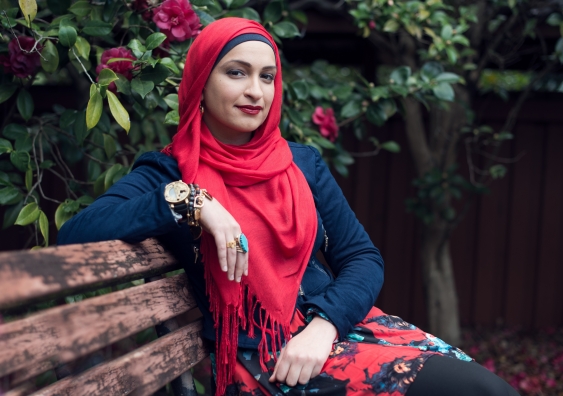 'When you see your own story told in literature, it sort of validates your identity and gives you that feeling that you are a part of this landscape': Maryam Azam.

Maryam Azam, author of The Hijab Files, rejects the role of “postergirl” for Muslim Australian women.

“I don’t presume to speak for all Muslims, or all Muslim women who wear hijab,” the Australian-born millennial says.

“I hate the idea of someone from a minority group, when they speak people presume that they are speaking for everyone in that group.”

Azam began exploring the Muslim-Australian experience in her poetry in response to misleading representations of Muslim women within the media and contemporary literature.

“Whenever a Muslim woman was mentioned it was always in heavily orientalised terms – you know, the typical stereotypes of the silent oppressed Muslim woman who has no agency, who can’t speak for herself, that kind of thing,” she said.

“These kinds of representations, as a Muslim woman, I found them really disempowering because of this whole idea [that] I somehow don’t have any agency around the choice to wear a hijab or that somehow wearing the hijab reduces me as a person.”

In her early writing practice, the 27-year-old poet saw little that represented her home life and Pakistani heritage.

“All my stories are about people called Mary or Charles or Sam living lives that are completely different to my life at home,” she says.

“Where my life at home is eating halal food and eating curry for dinner, the kinds of stories that my child-self wrote were just about these white characters, and that’s because everything that I read was about white characters in Australia.”

The Hijab Files provokes a reimagining of the Australian identity as “more than beach and bush”.

She seeks to expand our understanding of what is “Australian” through her work.

“As a person from a minority, you do find it really confronting and you do feel really vulnerable when you hear the kinds of things people like Pauline Hanson say,” Azam says.

“I think when you see your own story told in literature, it sort of validates your identity and gives you that feeling that you are a part of this landscape and ties in with that sense of belonging.”

Arab-Australian author Paula Abood also negotiates the trade-off between the self-actualisation of storytelling and the “burden of representation” – the assumption that individual marginalised voices represent their diverse and varied communities.

This burden manifests in readings of migrant and second-generation stories as autobiographical as opposed to fictional, she says.

“Publishers want women of colour especially to write experientially – the firsthand experience of being the brown woman.”

The denial of the imaginary life of the Arab – “this is racism”, she says.

“We are expected to write from a particular standpoint. Can an Arab woman just write a boring ordinary love story or does she have to bring honour killing into it so it fits in with an established white female readership?”

The colonial construction of the Arab “as a primitive kind of being”, identified in Edward Said’s seminal work on Orientalism 40 years ago, still predominates, Abood says.

Artists and authors can play an important role like Said did as a public intellectual who “challenged and disrupted the way literature is understood and read”, she says.

Having worked with refugee and migrant communities for 30 years, Abood champions the healing, political and connective power of story.

Her “feminist resistance literature” confronts traditional white myth-making in the national narrative and questions the conditions around representation in contemporary fiction.

“A lot of my writing has been around identity; problematising being ‘Arab’ and being ‘Australian’ … I’m very critical of that notion, particularly in the Australian lit context,” she says.

“As they say, ‘literature is the handmaiden of colonialism’. It’s critical that writers challenge, subvert and disrupt the master narratives.”

A different way of being Australian

Gonsalves came to Australia as an international student in 1998, working as a waitress, petrol station attendant, journalist, tutor and academic over the past 20 years.

She is currently the UNSW Copyright Agency Writer-in-Residence.

Her short story collection, written as part of her PhD at UNSW, focuses on the Indian community in Sydney.

“I wanted to see people like me in Australian literature, our experiences chronicled. I felt that those were the stories that I would like to tell,” she says.

“This is not a nostalgic reimagining of the homeland,” she says, but an imagined chronicle of life as an outsider in contemporary Australia.

She takes up the “cultural melting pot” of Australia in her current work-in-progress, set this time in early 19th century Sydney.

The novel explores Governor Lachlan Macquarie’s relationship with his Indian servant George Jarvis, and relies on the scholarship of historians of the early colony and of the links between Australia and India, including Robin Walsh,  Associate Professor Kama Maclean, Professor Grace Karskens, Heather Goodall, Devleena Ghosh, and Lindi R. Todd.

“The fact that there were Indian servants so close to government, complicit in the colonising process as well as being colonised themselves. It’s fascinating,” Gonsalves says.

“At the moment we have a very narrow view of what Australian history is … But there were people like us here for centuries, as part of the colonising process, as beneficiaries of that.

“What does that mean for us today?

“There’s a long history of immigration from all different parts of the world to this continent. So how does that change things for us?

“To me, it changes everything. We have a stake in this country ... We have a role to play and a responsibility.”

Azam, Abood and Gonsalves will be talking about their work at the UNSWriting event at the Io Myers Studio on Wednesday 3 October, 6:30pm - 8pm, in conversation with ABC journalist and historian Kate Evans (The Bookshelf).

The writers will discuss the challenges they face and the courage they show in changing what counts as Australian history. For more information, see here.