Opinion Sex and the City, Santiago style, where they’re serving up ‘coffee with legs’

Christine Steinmetz examines a fascinating anomaly that exists in plain view in Santiago, where café con piernas literally translates as coffee with legs. 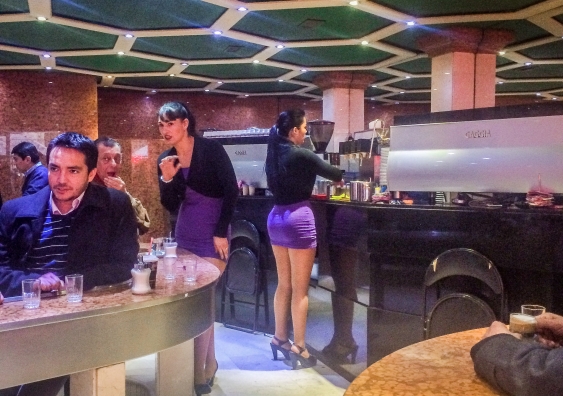 OPINION: It’s hardly surprising for a country that claims 74% Christianity, only decriminalised homosexuality in 1999 and finally legalised divorce in 2004, that Chile is considered one of the most socially conservative countries in Latin America.

However, in this institutional landscape of staunch conservative values, a fascinating and unique anomaly exists in plain view in the capital, Santiago. Strangely, this bustling city is a place of “dramatized sexual exception” played out in around 100 coffee shops known as café con piernas – which literally translates as coffee with legs.

Essentially, café con piernas are coffee shops with scantily clad waitresses. The varying degrees of undress depend on the location and target clientele. Initial observations suggest the presentation of these cafés varies widely, as do their customers and locations.

Our research on this somewhat contentious land use within greater Santiago began in late 2016. We conducted web searches to compile addresses from chat forums specialising in adult entertainment, combined with a variety of bibliographic references in online articles to provide a virtual snapshot.

However, not until we walked the Santiago streets (main thoroughfares and back streets) did the extent of the café con piernas become apparent. 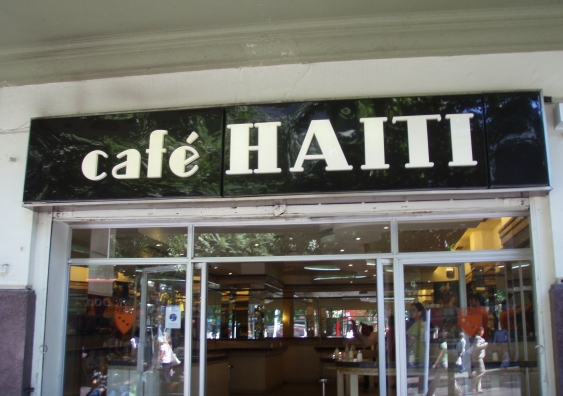 Initially, we identified 155 venues online. However, these cafés, like their sexually suppressed coffee-drinking customers, move frequently and can be short-lived. They are typically closed because of non-compliant activities.

Cafés are considered basically “compliant” if they observe three conditions:

Level 1: These are street-level cafés, typically in major thoroughfares, and can be considered “user-friendly”, meaning the waitresses are fully clothed, albeit decked out in extremely short, form-hugging dresses – con piernas. The cafés are open, bright and airy, with elaborate and expensive “High Italian” designer marble fit-outs.

Often offering seating outside, these are places that attract curious tourists and where you can have coffee with your parents.

The traditional café con piernas sells only coffee, tea, juice or a small selection of soft drinks purchased with a prepaid token. No food is served.

The cafés are designed to have standing space only. This is typically at a long elaborately styled bar with mirrored walls, along which the girls parade, often pausing to flirt briefly with favoured clients.

Level 2: These are are located behind blacked-out windows. They tend to be in enclosed gallerias and malls, and often have loud music blaring from within. The dark, minimal interior, about five metres square, has the general ambience of a classic strip club.

Level 3: These cafés are similar to Level 2, but have security guards standing outside. Typically, they do not allow women inside. We can only surmise that a wider range of “services” was on offer — although this was not confirmed.

The level of presentation of both the café environment and the waitresses becomes increasingly scant in these venues, particularly the further you travel from the CBD into the lower-income suburbs.

After two months of fieldwork (and far too many coffees), the variety of levels of café con piernas is clear. Their offerings range from a modicum of titillation and the opportunity for an innocent encounter with a pretty girl in the sophisticated decor of the city centre outlets to thinly masked covers for “adult services”, generally in rougher areas on the CBD fringe.

Why Santiago of all places?

Lots of cities contain aspects of sexual and social repression. But what has caused Santiago to evolve these intriguing hybrid outlets? And why are they tolerated in such a conservative society?

One suggestion is that the original café con piernas, El Baron Rojo (The Red Baron), which first opened its doors in 1985, was an antidote to the suffocating oppression experienced under the 17-year dictatorship of Augusto Pinochet during the 1970s and 1980s.

They may also reflect the sexual constraints imposed by the dominant religion, or simply a biological desire for attractive young female company. For city researchers, this is certainly worth investigating.

Coffee and sex are two universal commodities. The extent to which this phenomenon could exist anywhere else is debatable. Often, it is the tumultuous and corrupt history of a country that helps create unusual anomalies like Santiago’s café con piernas.

Christine Steinmetz is a Senior Lecturer in Built Environment, UNSW.

This story originally appeared in The Conversation. Read the original article.