The 22nd Biennale of Sydney is testament to the capacity of art and exhibitions to move beyond reflection to lead dialogue, especially at times of crisis and cancellations. 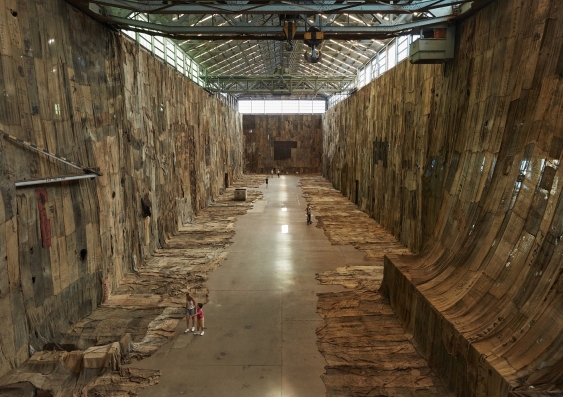 Three days into its programmed three months, at the time of writing the 22nd Biennale of Sydney is one of the few major public events in the world not to have been entirely closed down in response to the coronavirus pandemic.

Art and exhibitions are often the first to be pushed aside in times of crisis, dismissed as having no relevance to solving the challenges at hand. Indeed, the 2020 Biennale of Sydney does not provide solutions to the world’s current health crisis. It does better than that, offering a visually rich, coherent and global perspective to more deep-rooted problems such as environmental crises, human rights and broadening social inequality.

This Biennale, more than any of the previous 21 editions, is testament to the capacity of art and exhibitions to move beyond reflection to lead dialogue. With a mandate for collaboration, education and new restorative relations with oppressed and marginalised communities, it proves that exhibitions can be not only provocative, but catalysts for change.

Titled NIRIN – edge in Wiradjuri, the language of Artistic Director Brook Andrew’s mother’s people – the Biennale features the work of artists from countries, cultures and identities usually relegated to the periphery. These include an unprecedented number of First Nations and many gay and non-binary artists.

Biennales, of which there are more than 200 internationally, are the world’s most high-profile and well-attended exhibitions of contemporary art. Andrew has taken full advantage of this opportunity and much of the work is documentary in nature, like Andrew’s own artistic practice, which appears throughout in the form of strategically placed Powerful Objects. Its unabashedly scholarly approach is symbolised by Masonite clipboards hooked to the walls in place of formal museum labels. 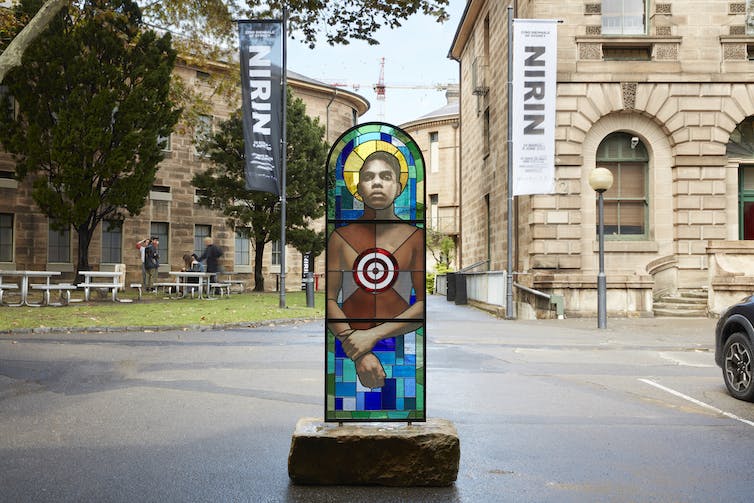 The exhibition is a timely and much needed political discourse that relocates artist’s perspectives from the edge to centre stage. The cavernous turbine hall at Cockatoo Island, for example, is taken over by a monumental installation of jute cocoa bags lining the walls by young Ghanaian artist Ibrahim Mahama. Previously commissioned by the 2015 Venice Biennale and 2017 Documenta, Mahama creates physically immersive environments from the vestiges of colonial oppression, deploying them as coverings for architectural bastions of power. Originally intended for the façade of the Art Gallery of NSW, the installation works more successfully here where it can be experienced somatically as visitors walk through the installation and smell its aroma.

The veiling of history with symbolic textiles is a recurring theme. Madagascan artist Joël Andrianomearisoa has suspended translucent black drapes around the building, altering viewers’ perception of space. At the Art Gallery of New South Wales, his veils cover selected artworks in the Grand Courts, where historic European art is housed alongside the gallery’s extensive collection of colonial and early 20th century Australian painting and sculpture. 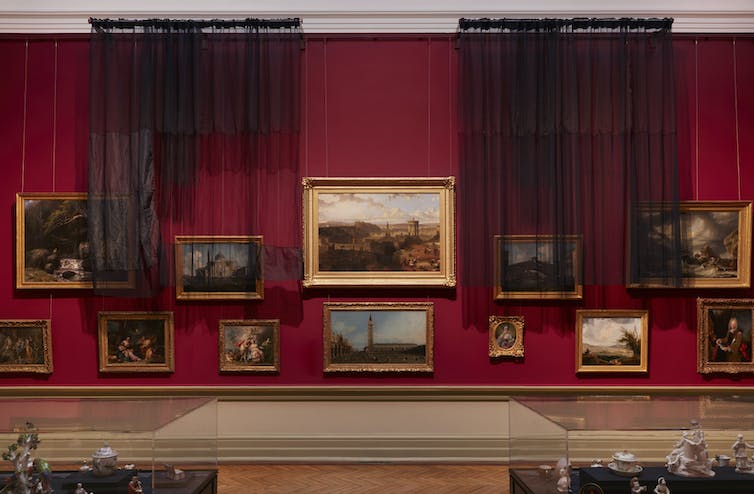 Joël Andrianomearisoa’s There might be no other place in the world as good as where I am going to take you (2020) Sabrina Amrani Gallery, Madrid/Biennale of Sydney

Andrew has interrupted and overlaid Eurocentric historical narratives with the voices of First Nations artists from Australia, New Zealand, Africa and the US.

In this forced confrontation between white history and First Nations’ experience, artists’ voices are amplified. American Arthur Jafa’s White Album, a filmic collage about racial otherness, was a highlight of the 2019 Venice Biennale. It is much more powerful here, placed in conversation with European paintings portraying social concerns of the 19th century. 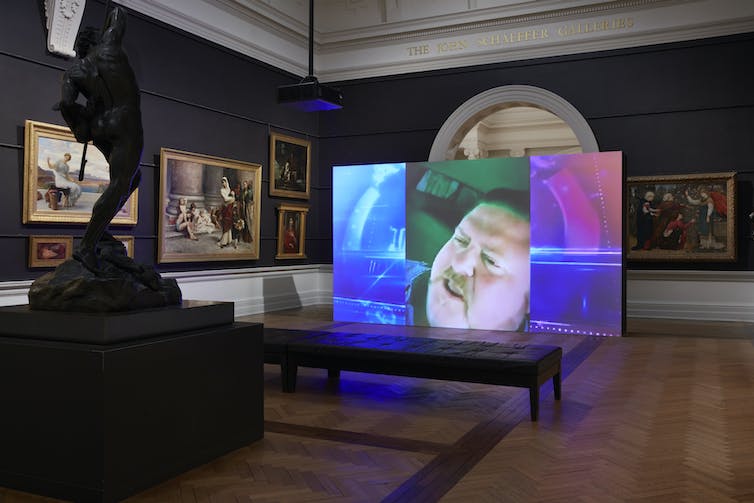 Andrew demonstrates that it is artists who are taking the lead in documenting and sharing experiences of hardship. Aziz Hazara’s film installations at the MCA and Campbelltown Arts Centre chronicle the plight of people in war-torn Afghanistan. The palpably traumatic project by Mexican artist Teresa Margolles at the National Art School Gallery immerses viewers in a sensory tribute to victims of gender-based violence in Mexico and Sydney. 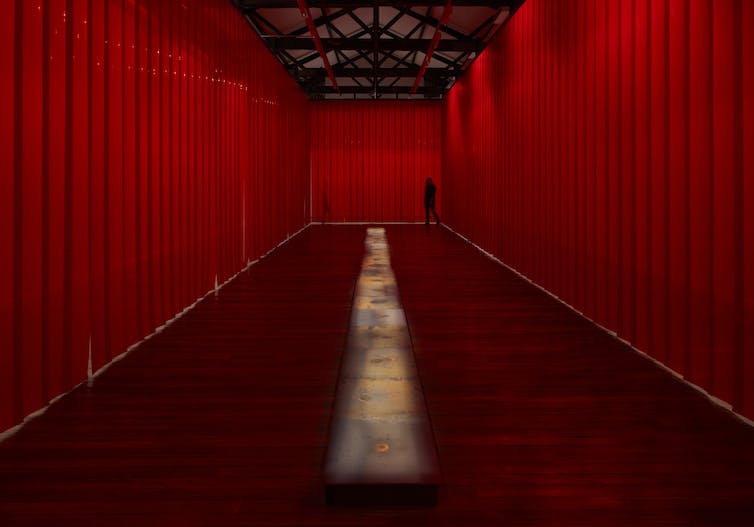 At Campbelltown Arts Centre, the galleries have been carefully divided into a series of blackened rooms that physically and symbolically intersect. Even the interstitial spaces are occupied, a curatorial device that speaks to the historic invisibility and occupation in hidden spaces of marginalised peoples.

In nooks and crannies, chequered laundry bags transmit urgent communiques about deprivation in Australian Aboriginal communities. Made by artists at the Iltja Ntjarra (Many Hands) Arts Centre in Alice Springs, they are huddled together on the ground like the homeless in our city centres, seen but not afforded the opportunity to be heard. In contrast, the decades-long work of Gomerai photojournalist Barbara McGrady is celebrated in a large and loud film installation that provides a contextual anchor to the surrounding international artists’ works.

The visual displays of the 2020 Biennale of Sydney may soon be suspended due to the current health pandemic, but the Biennale’s foregrounding of art by First Nations artists and initiation of long-term community projects will be its greatest legacy.

The Dharug community in Western Sydney will lead a series of activations to heal the site of the infamous Blacktown Native Institute, and the Biennale will work closely over the next four years with the Australian Institute of Aboriginal and Torres Strait Islander Studies on a national program of cultural renewal.

The 2020 Biennale of Sydney is a formidable project that could not have been achieved by a non-Indigenous person. As an exhibition it will be remembered for the stories it shares, relayed with courage and candour, warmth and sometimes humour, by artists at the coal face of inequality.