A panoramic exhibition that visually forecasts the global displacement of entire cultures will have its Australian premiere at UNSW Galleries on Saturday as part of the Sydney Festival. 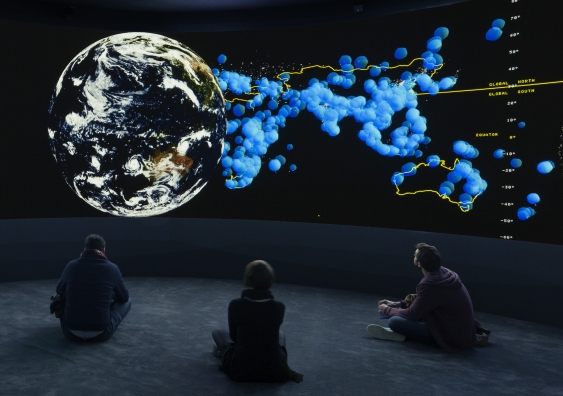 A panoramic exhibition that visually forecasts the global displacement of entire cultures will have its Australian premiere at UNSW Galleries on Saturday as part of the Sydney Festival.

The immersive installation, EXIT, reveals statistics illustrating human displacement due to natural and man-made disasters, and the decimation of entire cultures, environments, and livelihoods.

Drawing on data from more than 100 sources, including UNESCO and the World Bank, the exhibition stunned the 2015 United Nations Conference on Climate Change in Paris with its global forecast.

Described by the Guardian UK as “a stark reality check for Earth’s inhabitants", EXIT holds a mirror to one of the world’s largest global concerns: the unprecedented number of migrants leaving their home countries for political, economic and environmental reasons.

Visitors to the installation are surrounded by a panoramic video projection of a spinning globe producing animated visuals. The maps and texts are produced from collected data then geo-coded, processed through a programming language, and translated visually to provide a dramatic picture of global sustainability today.

Commissioned by Paris’s Fondation Cartier pour l’art contemporain, EXIT is based on an idea by French philosopher and urbanist Paul Virilio, and is brought to life by Diller Scofidio and Renfro, with Laura Kurgan, Mark Hansen and Ben Rubin in collaboration with Robert Gerard Pietrusko and Stewart Smith.

”EXIT is a monument to the present time that traces the movement of our world,” said Hervé Chandès, General Director of the Fondation Cartier.

Sydney’s Lord Mayor Clover Moore has been working with UNSW Galleries to bring the installation to the city since she first viewed it at the United Nations Conference on Climate Change.

“I found EXIT incredibly moving. It is riveting, overwhelming and informative. It leaves no doubt that climate change is already making a huge impact,” she said.

UNSW Grand Challenges is an initiative to establish the University at the forefront of debate and policy response to the biggest issues of our time.

An extensive series of public programs will be presented with the exhibition including talks by EXIT’s US-based creators.

What: EXIT presented in association with the Sydney Festival and major sponsor the City of Sydney

Climate change is a security threat government is ignoring. We are empty handed on the global stage