Opinion Teaching young people about sex is too important to get wrong. Here are five videos that actually hit the mark

To be effective, a video needs to be clear about its message and relatable. The government's milkshake video seemingly about consent failed on both counts. But these videos get it right. 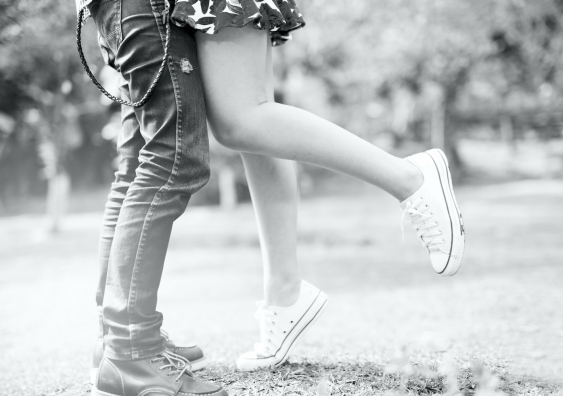 The government released the Good Society resource in mid April, which consists of more than 350 materials including videos, digital stories and podcasts to teach respectful relationships in schools. The two videos that were removed had been widely criticised by politicians, sexuality educators, and sexual assault support groups for missing the mark on sex education.

One clip, showing a couple on a film set that looks like a retro diner, aims to teach about consent through the metaphor of a milkshake. After a young man rejects a young woman’s milkshake, she smears milkshake in his face, saying sentence “Drink it all!”.

The scene is followed by somewhat confusing diagrams of a football field with a voiceover explaining ideas about shared decision making.

I’m a visual culture researcher interested in how information about sexuality and relationships can effectively be communicated to young people. I have compiled several examples of sexual education videos that better meet the needs of young people.

What works in sexual education?

The milkshake metaphor in the Good Society video is confusing because it is meant to teach about sexual consent, but doesn’t ever mention sex. Nor does it explain what the metaphor stands for.

Young people already see a explicit and distorted representation of sex in pornography. Generally, boys start watching around the age of 13 and girls around 16. So, it seems antiquated to produce sexuality education resources that don’t speak directly about sex.

The Good Society resource attempts to use humour to engage the audience. Research shows humour can be an effective strategy in public health campaigns. However, sustained behaviour change relies on easily understood messages, a feeling the information is personally relevant to the targeted audience, and a sense of self-efficacy (the individual knowing how to act on the information they see).

Read more: Not only are some of the government's consent videos bizarre and confusing, many reinforce harmful gender stereotypes

Because the Good Society resource was confusing, the humour was confusing as well. And the video failed to create a clear sense of personal relevance and self-efficacy.

Here are videos that work better.

The Practical Guide to Love, Sex and Relationships was developed by expert sexuality education researchers at the Australian Research Centre in Sex, Health and Society (ARCSHS) at La Trobe University.

The resource includes a series of humorous but straightforward animated videos dealing with sex, pornography, relationships, consent and gender.

One video for students in years 9 and 10, illustrates sexual desire and consent by using a couple of astronauts and then a couple of pirates.

Though these depictions may sound as confusing as the milkshake metaphor, the metaphors in these videos are clearly explained. And the use of colloquial language provides a sense of relevance. The narrators of the videos talk directly to young people:

“That looks like electricity”, a male narrator says when lightning bolts are drawn coming towards the head of a boy.

“It’s a metaphor for all the shit going on,” the female narrator responds.

This video uses many metaphors such as roller coasters, astronauts and even a hilarious parody of John Travolta trying to grope Olivia Newton-John to discuss relationships and consent.

The drawings are informal and engaging, as opposed to the football field diagrams used in The Good Society resource.

The video ends with a set of questions teenagers can ask themselves to gauge whether they feel comfortable in a situation. Clear advice helps create a sense of self-efficacy.

Read more: Not as simple as 'no means no': what young people need to know about consent

Another video, with the same two narrators discusses the stereotypes women and men have to grapple with. It uses a rhinoceros as a metaphor for sexual desire, with a man and woman on top.

A rhinoceros is a metaphor for sexual desire, but the narrators acknowledge that and make a bit of a joke out of it.

Scandinavia is known for leading the way in progressive sexuality education. The low teenage pregnancy rates in Scandinavian countries (Norway and the Netherlands have some of the lowest teen rates in the world and Sweden’s is roughly one-fourth of Great Britain’s) are regularly touted as proof of its effectiveness.

In Sweden, an animated video produced by The Swedish Association for Sexuality Education follows four teenagers receiving an unexpected lesson from a substitute teacher.

As they ask the teacher questions, many topics are discussed from the appearance of genitalia, to respect in relationships and STDs. 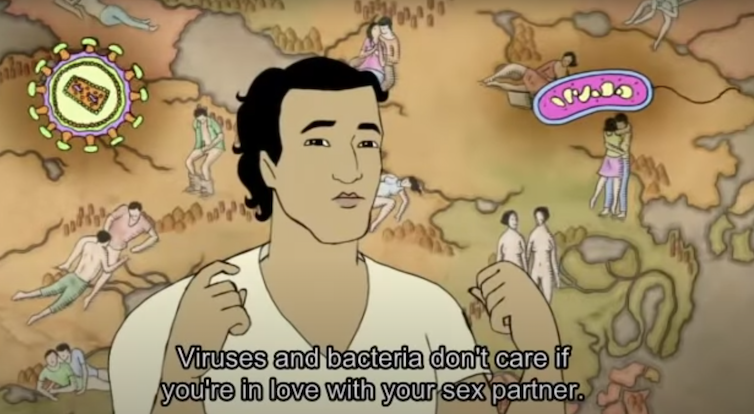 The Swedish video discusses many topics related to sex, from the appearance of genitalia to the discomfort of putting on condoms. Image: Screenshot from Sex on the Map video

The animation includes a scene where two of the students try to have sex, but fumble with condoms and nerves. The scene seems very real, and would be relevant to the lived experience of many teens.

Incorporated into the narrative are gay and lesbian storylines, making it relevant to a diverse audience. The fact the story is animated allows for more explicitness, without moving into the realm of pornography.

The video has an age restriction but can be viewed on YouTube.

Although not part of a school education program, the New Zealand government campaign, Keep it Real Online, aims to help parents navigate digital safety. A video shown on television is a good example of how humour can be used effectively to approach sensitive topics.

This hilarious video uses disarming humour to get its message across.

And then there’s the cup of tea

And finally, there’s the very well-known video which explains consent through the metaphor of offering someone a cup of tea. Again, it clearly identifies the metaphor in the beginning, and goes through the idea of asking someone for sex, but instead replacing sex with tea. If you ask someone if they want a cup of tea and they’re not sure if they do, then the video advises

you can make them a cup of tea or not, but be aware they might not drink it, and if they don’t drink it then — and this is the important part — don’t make them drink it.

This well-known video explains consent through a relatable metaphor of a cup of tea.

It is crucial we get sexuality education right for teenagers who need to not only navigate sexuality and relationships, but also deal with the proliferation of pornography and technology.

If we want to teach teenagers about sexual consent, we will need to talk about sex not milkshakes.

Read more: Young people are hungry for good sex education. I found a program in Mexico that gets it right