Ceramic tableware inspired by the spirituality of the South American Sanema tribe has won an Art & Design student an internship with Royal Doulton. 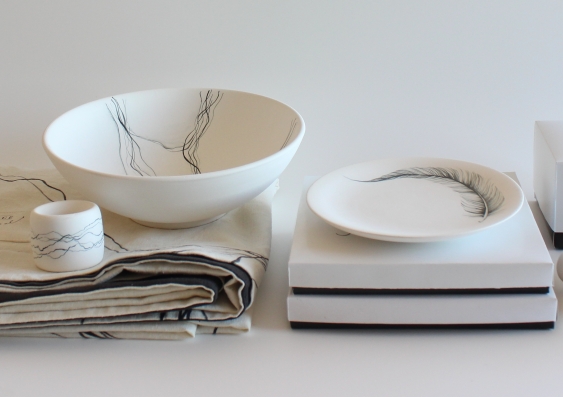 Jaimee won the Royal Doulton and UNSW Art & Design Award for her tableware range, Hom-age, inspired by the spiritual lives of the tribe who live on the Venezuelan and Brazilian border.

Third and fourth-year undergraduate design students were required to conduct research into the brand while considering designs that explored global food trends.

“Deforestation and mining have impacted on the Sanema tribe to the point that they are losing their land, food sources and spirituality. The feather in my design is significant because it symbolises the fragility of their future,” she said, referring to the hand-painted motif on her tableware.

Royal Doulton were impressed by the undergraduate’s work because it provides a “positive and meaningful” conversation at the dinner table.

Jaimee, who majors in graphics and textiles, had never worked in ceramics before entering the competition.

“I bought the ceramic ware from Brookvale Ceramics Studio and painted it – I don’t have to reinvent the wheel, I’m not a ceramicist so I worked to my strengths.”

Jaimee is one of many contemporary designers and artists without a ceramics background who have worked with Royal Doulton in recent years.

“It’s one of the qualities that keeps Royal Doulton fresh,” he said, when meeting with the six finalists at Art & Design’s Paddington campus on a recent visit to Australia.

Mr Delaney said he was amazed by the quality of the work. “Everyone at Royal Doulton was impressed with the overall standard.”

Jaimee leaves for the UK at the end of this month to take up a one-month residency at the company’s design department in Staffordshire where she will work closely with the 17-person studio on a ‘live’ project.

“I hope to learn as much as I can – I’ve never worked in a corporate environment before but I know Royal Doulton value people from other disciplines and the perspectives they bring so I’m really looking forward to it.”

The Award is the result of initial contact with Royal Doulton from an enterprising student, Larissa Silva.

School of Design Studies senior lecturer, Rod Bamford said the partnership with Royal Doulton has been “a very rewarding journey, with a great partner who is very committed to the educational aspect of the venture.”