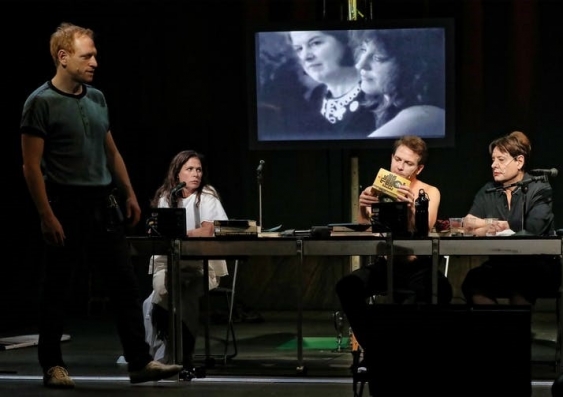 OPINION: The moment was 1971, Labour Day’s eve. The context: a biting critique of feminism published by journalist-novelist Norman Mailer in Harper’s magazine earlier that year. Mailer’s essay, The Prisoner of Sex, sold more than any previous Harper’s edition.

The year is now 2018 and New York experimental theatre company the Wooster Group is replaying this signature event with audacious physical, rhythmic and vocal precision as part of the Sydney Festival at the Opera House.

Using the 1979 film documentary of the event, Town Bloody Hall, The Town Hall Affair reworks the gestural, aural and filmic traces of a signature moment in the history of the Women’s Liberation Movement. The stage production, directed by Elizabeth LeCompte, shows how time, when critically replayed against another time, reveals its bleed: the socio-historical ruptures, cross-fades and points of continuity.

For one thing, Greer – whose characteristic manner and voice is carried with powerful nuance by actor Maura Tierney – seems to appear and appear again in the production. In Tierney’s replay, the familiarity of Greer’s jocular head tilts, her indignant eye rolls, and her impassioned vocal cadences convey the sheer enormity of her intellectual contribution to the history of women’s lives. It shows how her unwaveringly public presence worked to disrupt the (then) set habitus of gender relations.

Behind Tierney, an “original” Greer appears on a screen projection of the 1979 documentary, which captures the particular riotousness of the original event. Greer speaks with candid eloquence against a culture of the privileged masculine artist whose achievements happen at the expense of her own. “We broke our hearts trying to keep the aprons clean,” she implores. Her commitment to her own voice even now astonishes.

These two Greers are flanked by a third Greer, the real one, who is here now for the Sydney premiere.

While the 1971 audience included Susan Sontag and Betty Friedan, this week Greer herself attended the Wooster Group’s show, re-heckling the unfolding calamity of the past as it replayed in the present.

Greer’s public presence as a feminist commentator has not wavered since the 1970s, yet her almost intertextual presence in the here and now of the theatre auditorium revealed something else about why this theatre work succeeds.

There is a painfully familiar quality about much of the discourse dynamics we witness in the show. The female speakers jostle for first position. They are punished for running over time. They are not heard. They do not agree.

The boldness of Mailer – positioned as mediator and calling the female speakers “ladies” – only seems more impudent for the contemporary familiarity of the whole set-up. Played expertly by both Ari Fliakos and Scott Shepherd, the Mailer characters’ vocal pace reveals how voice alone carries histories of power, of who is allowed to speak, and when and why. 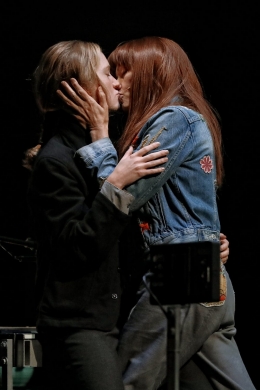 A woman stages an intervention during a poetry reading by Jill Johnston, played by Kate Valk, right. Photo: Prudence Upton

Jill Johnston’s free-verse spoken-word poetry is a marvel in this context, rendered with potent whimsy by Kate Valk. Johnston’s words, like Greer’s, move us from witnessing the past to being activated in the present, recomposing the Opera House audience into some form of cross-temporal convention.

Her poetry offers stunning incitements such as “a woman who can love herself naturally is a woman is a lesbian”, calling for none other than “a lesberated woman”. Johnston’s wordplay is dismissed by Mailer but nonetheless compels two female audience members to mount the stage and kiss her. Mailer tries to call for order; the audience is loudly divided.

The original event was a riot. And its arguments on all sides became heartfelt but increasingly unclear, at risk of complete decomposition or, at least, discomposure. As the reperformance begins to exceed the original, another film is projected, Maidstone by Norman Mailer, providing a different underscoring to the live action.

This little-known film, described in the program as concerning “a famous film director … who is running for President while making a movie about his campaign”, seems to expose more than explore the unrelenting masculinity that has evolved through Mailer to his contemporaries. The pre-ghosts of Donald Trump and Hilary Clinton seem everywhere here.

The Wooster Group has been a driving force in theatre that includes film and digital technology since 1975. And yet this 2018 event, or re-event, seems exceptionally prescient. Its timeliness can be read in its attempt to understand history unfolding, the evolution of feminism, and its continuities, failures, ruptures and successes. The fallout goes on.

The Town Hall Affair will be staged as part of the Sydney Festival until 13 January.

Bryoni Trezise is a Senior Lecturer in Theatre and Performance Studies at UNSW.

In Suzie Miller's Prima Facie, theatre finds a voice of reckoning on sexual assault and the law