Nigel Milsom’s gothic portrait of Sydney barrister Charles Waterstreet has won the 2015 Archibald prize, the third consecutive year of success for UNSW Art & Design in one of Australia’s most prestigious portrait competitions. 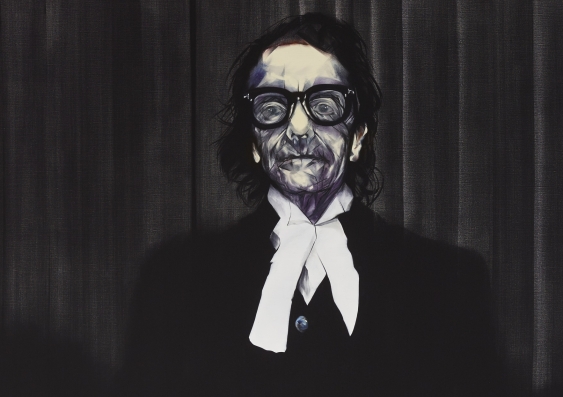 Nigel Milsom’s gothic portrait of Sydney barrister Charles Waterstreet has won the 2015 Archibald prize, the third consecutive year of success for UNSW Art & Design in one of Australia’s most prestigious portrait competitions.

Milsom, who graduated from UNSW with a Bachelor and Master of Fine Arts, said he was shocked to receive the $100,000 prize for his work of Waterstreet, who represented him in court and became what he described as a “mythical kind of saviour”.

“So much hinged on what he had to say and do, and it’s a painting that’s really sort of showing him as a giant in my life at the time,” said Milsom of the winning work Judo house pt 6 (the white bird).

“It’s a picture that to me represents a kind of dependence.”

Milsom said he was drawn to Waterstreet’s complexity and otherworldly feel, likening the features of the iconic co-creator and inspiration behind the ABC series Rake to those of a scarecrow or insect.

It is the third year in a row that a UNSW Art & Design student or graduate has been successful in the Archibald.

Master of Fine Arts student Fiona Lowry won in 2014 for her ethereal portrait of the architect Penelope Seidler, and graduate Del Kathryn Barton received the prize in 2013 for her painting of actor Hugo Weaving – her second Archibald nod.

“We are thrilled for Nigel. The Archibald brings contemporary art into living rooms across the country and is one of the most high profile cultural awards made annually,” Harley said.

“Over the past three years UNSW Art & Design students and alumni have been recognised by winning the Archibald prize and we congratulate each of the finalists and participants.”

UNSW also shone in the Sir John Sulman prize, with graduate Jason Phu’s I was at yum cha when in rolled three severed heads of Buddha: Fear, Malice and Death winning the award for the best subject painting, genre painting or mural project by an Australian artist.

Phu was a finalist in both the Sulman and Archibald prizes. His irreverent ink and calligraphy work draws on the tensions inherent in his Chinese-Australian upbringing.

Six UNSW alumni were named in the field of 47 finalists in this year’s Archibald prize and five were in the running for the Sulman.

The Archibald, Wynne and Sulman Prize finalists’ exhibition is on at the Art Gallery of New South Wales from 18 July to 27 September.

The Archibald: our ‘most fun’ festival of faces