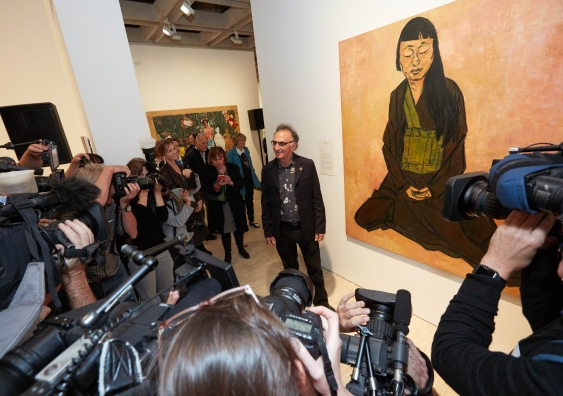 When Tony Costa received a phone call from Art Gallery of NSW Director Michael Brand last Friday morning, he thought Mr Brand was calling to tell him something ominous had happened to his entry into the 2019 Archibald Prize.

“The phone cut out and I said to my partner he’s probably ringing to tell me it’s fallen off the wall or been damaged in the installation,” Mr Costa said.

In fact, something had happened to Mr Costa’s stripped-back portrait of fellow artist and Zen Buddhist, Lindy Lee. It had been selected as the winner of the 2019 Archibald Prize.

“My initial reaction was ‘wow,’” said Mr Costa. “It’s pretty amazing. The word ‘nirvana’ keeps popping up. It is all of the things people say it is – it is surreal, and it is a wonderful affirmation. It’s just fantastic. It is such a joy.”

Mr Costa, a four-time Archibald finalist, completed postgraduate studies in 1986 at the City Art Institute, which is today known as UNSW Art & Design. Mr Costa’s win marks the fourth time in seven years that a UNSW Art & Design student or graduate has received the Archibald nod.

“My time at City Art Institute was revolutionary,” said Mr Costa. “It demystified everything for me. I was surrounded by great teachers and artists like Colin Lancely, John Firth-Smith, Fred Cress and Syd Ball,” Mr Costa said. “I entered as a mature age student and I spent most of my time in the library talking to the lecturers. It was a turning point in my career – a fundamental and significant shift.”

Art wasn’t Mr Costa’s first career, but it was his first love. He was studying law part-time and working in the district court. His grades started to slip, and he was forced to evaluate his path. A conversation with his mother pointed him in a new direction.

“She said, ‘follow your heart’, but I was convinced she had said ‘follow your art’,” Mr Costa said. “I had very supportive parents.”

Mr Costa was first introduced to painting at the age of 13 when an art teacher at Christian Brothers High School nailed a piece of board to a tree and instructed him to paint.

An artist in her own right, Ms Lee was a finalist for the Archibald Prize in 2002 and has appeared as a subject twice before. Ms Lee graduated in 2001 from what was then the College of Fine Arts at UNSW with a PhD in Art Theory .

Mr Costa said he was drawn to Ms Lee’s wisdom, humility and courage while watching interviews on YouTube.

“She said, ‘Don’t be defined by art prizes,” said Mr Costa. “She had lots of wise things to say and I needed to know more about this person. I watched interviews Lindy had done with Fenella Kerneborne and I found myself nodding at everything she was saying. She was wise, humorous, funny, humble and she is also very generous and not to mention courageous. She is all of the things I admire in other artists.”

After an initial introduction and a few emails back and forth, Mr Costa and Ms Lee met in early 2018 to begin work on the portrait. Time was limited as Ms Lee had recently been selected from a global pool of applicants to design the gates to Chinatown in Manhattan.

In one sitting, Mr Costa completed a charcoal sketch and the painting was finished in two days.

“What matters to me is not visual accuracy but feelings above all else. In a nutshell, that’s what I do,” said Mr Costa, who added that he approaches each painting with an empty head and begins each portrait with charcoal drawings to collect sensations and information.

“The challenge for me is to trap the energy of my sitter – the emotional feeling over and above the physical reality. In my portrait of Lindy, I have kept the colour minimal to avoid any visual noise. Ultimately the invention and the unity of the work is what matters most.”

“We are thrilled that Tony Costa’s meditative painting of Lindy Lee has been recognised as the winner of the 2019 Archibald Prize,” said Professor Harley. “It’s the most important prize for portraiture in Australia, a cultural phenomenon that brings contemporary art to a wide audience every year. The Art & Design community congratulates all of the UNSW artists included among this year’s finalists.”

The Archibald Prize is now in its 98th year. This year saw a record 919 entries, which were narrowed down to 51 finalists. Of those, 11 finalists were UNSW Art & Design graduates. Another 10 alumni were named as finalists in the Sir John Sulman Prize awarded for the best subject painting, genre painting or mural project by an Australian artist, and one graduate was a finalist for the Wynne Prize for landscape painting or figure sculpture.

The exhibition of the Archibald, Wynne and Sulman winners and finalists is on at the Art Gallery of New South Wales until 8 September 2019. For more information, visit www.artgallery.nsw.gov.au.