Making the semi-finals in the Bucharest International Jazz Competition is an inspiration to other UNSW Music students. 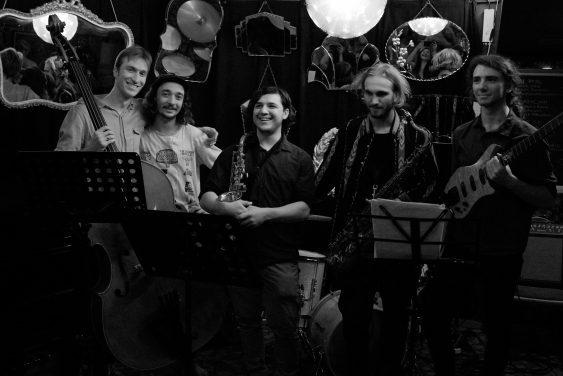 A UNSW student band which formed just two years ago has been selected for the prestigious Bucharest International Jazz Competition.

The competition is ranked the second-best jazz contest in Europe and third best in the world.

“We are very proud that a UNSW ensemble has made it this far in the competition – first and foremost it is a testament to the band themselves,” says Dr Sandy Evans, Lecturer in Music with the School of Arts and Media (SAM) and band mentor.

The competition is open to international bands and vocalists aged 40 years and under. This is the first time a UNSW student ensemble has represented Australia in the competition.

The band will perform three times during the semi-finals which start on May 11, and will compete against 17 bands from 12 countries.

The band will also have the opportunity to attend jazz workshops and to jam with musicians from other countries.

Anoesis is defined as a state of mind consisting of pure sensation. It members describe their sound as “complex and spontaneous, at times powerful and intense, at times subtle and intimate, and laced with influence from modern jazz, hip-hop, fusion, and electronica”.

“John Coltrane's classic quartet, Miles Davis's first and second quintets, and Art Blakey and The Jazz Messengers are the first four groups that come to mind, all from around the mid '50s to late '60s.”

The group of composer-improvisers met during their first year of their music degree.

“By mid-2016 a number of us were getting together several times a week to play all sorts of repertoire: exam pieces, jazz standards, original compositions, free improvisations, and so on,” Mr Muir says.

“Often we’d start at 6pm on a weeknight, order pizzas and stay until after 10pm.”

They later applied for the UNSW Chamber Ensemble, which is offered to a limited number of small ensembles by merit and affords performance opportunities and mentorship.

They were paired with Dr Evans, a saxophonist, composer, educator and music researcher, who says the band had “developed an original sound and way of playing together, and have become very accomplished improvisers”.

Mr Muir, who says he was originally infatuated with rock and heavy metal music before being drawn to jazz, says he used his music degree the moment he stepped foot on campus, by networking and playing with his fellow cohort.

He says the band are honoured to be selected in the competition.

“Playing in the competition, more than anything else, is an amazing opportunity to network with other musicians from around the world, and to check out the scene in Bucharest,” he says.

Dr Evans says the band’s participation in the competition is an inspiration to other UNSW students.

“Have faith in the power of your passion for music – that will get you through so many more obstacles than you can possibly imagine,” she says.

Anoesis will perform in a fundraiser for the band’s Bucharest trip at the Io Myers Studio at UNSW Sydney on Wednesday (27 March) from 7pm.