A luminous kind of sea creature in the guise of a piece of public furniture has washed up on the water’s edge at Walsh Bay for Sydney's Vivid Festival. 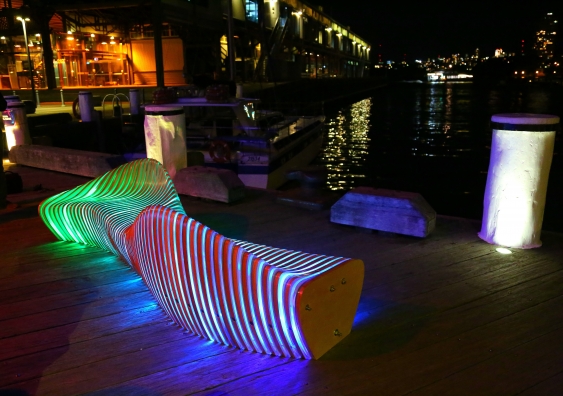 A luminous kind of sea creature in the guise of a piece of public furniture has washed up on the water’s edge at Walsh Bay for the Vivid Festival.

Its flowing curves ripple with colour, enticing curious onlookers to come closer to be seated while captivated by a grand harbour view. But something is wrong for, as soon as visitors sit, the colours bleach white and only emerge to full luminescence as the guests retreat.

This engaging piece of public furniture – a bench that’s more like an electric jellyfish – makes you sit up and take notice.

The work which forms part of Sydney’s Vivid Festival has been created by Nila Rezaei, a Bachelor of Design Honours student at UNSW Art and Design, with technical expertise provided by UNSW Engineering graduate Nathan Adler.

Climate change, caused by greenhouse gas emissions, has increased the temperature of the oceans and led to coral bleaching. Scientists predict that, unless action is taken now, the planet could lose three-quarters of its coral reefs by 2050.

Nila first visited the subject of global warming in a third year assignment to devise a graphic art campaign for the 2015 Paris Climate Conference. More or less as a passing thought, she offered her concept of a bioluminescent marine creature to Vivid Sydney, which has led to an invitation to submit the design for an Australian Lighting Industry award.

Discussing the process of creating the installation, Nila laughs.

“It killed me almost. It was a massive project and six months in the making but I learned so much.”

“It’s almost like crocheting: the repetitive curvy forms that you create as you crochet have the same kind of parabolic geometry as the structure of coral reefs.”

The challenge was to meet the material needs of a fluid organic shape made, not from yarn, but from alternating wood and acrylic panels fitted with LED lights and an infrared proximity sensor. 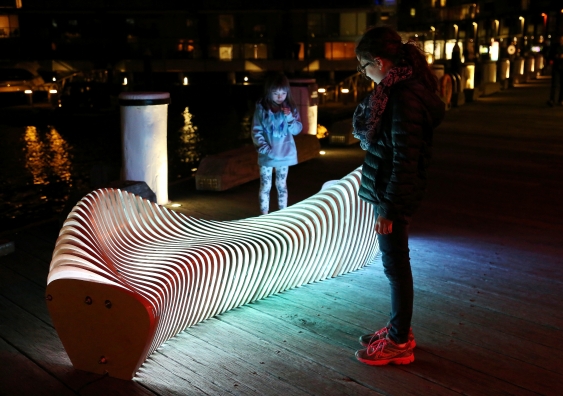 Nila concedes that there’s a strange beauty in the deathly pallor of Exterminia “so we tried to turn off the light as people came close to it, but that didn’t work at all. The white light is inert, it’s dead, there’s no more ripple or flow in the movement as if it’s alive or as if it has a heartbeat, it’s all gone.”

The heart is fundamental to Nila’s work. It’s the reason she came to Australia from Iran at the age of 18. She grew up near the Caspian Sea, in the city of Amol, but had not thought of Australia as home until she met her Persian Australian boyfriend while he was on holiday in Iran.

“He said; ‘Why don’t you think about Australia, it’s a nice country, there are some good universities there, I will come with you.’ So I applied to UNSW Art and Design and moved here.

“This is where I want to be for the rest of my life … it is very hard for a woman in Iran to express herself or to be free about art or creativity. My family are very liberal so I never felt restricted but I read stories every day so I know self-expression is a problem.”

Nila’s ambition is to blend “the beauty in things” with “the practical things that effect change through design” and, in particular, in the field of health and medicine. It’s an obvious area of interest since she comes from a family of medical scientists. Her honours research focuses on an interactive health design that will help migraine patients by incorporating cooling healing therapy into a wearable device.

“It’s an idea that I hope will give some people a better view to a different world,” she says.

UNSW at the heart of Vivid