Why aren’t there more women in the construction sector?

The National Association of Women in Construction has awarded PhD student Natalie Galea two lucrative scholarships in recognition of her research on gender diversity in the construction sector. 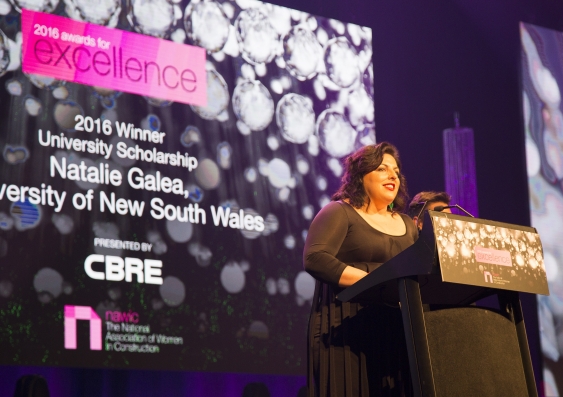 The National Association of Women in Construction (NAWIC) has awarded PhD student Natalie Galea two lucrative scholarships in recognition of her research on gender diversity in the construction sector.

Galea was awarded the 2016 NAWIC International Women’s Day Scholarship, worth $23,000, for research into gender diversity and equity in the construction industry. She was also awarded the 2016 NAWIC NSW CBRE University Scholarship, worth $3000, which recognises outstanding female students who have the potential to significantly contribute to the future of the construction industry.

Galea, from UNSW Built Environment, is researching an industry she is intimately acquainted with. For just under two decades she worked in Australia, the Middle East and North Africa as a construction project manager after completing a Building Construction Management degree at UNSW.

“It’s a tough industry, there’s no doubt about it,” says Galea. “I left because in the end I was in a loveless relationship with my career. There was no progression available to me and I felt that I wasn’t being given the opportunities I deserved, largely because I was a woman.”

Female participation in professional construction roles is only 14 percent, and women leave those positions at a 40 percent higher rate than their male counterparts.

“My PhD aims to understand why females struggle to be appointed, promoted and retained in the Australian construction sector.”

"Female participation in professional construction roles is only 14 percent, and women leave those positions at a 40 percent higher rate than their male counterparts."

Galea said she wanted to make sense of her career and understand why she had so few women peers on construction sites and in senior operational roles in construction companies.

“My aim is to determine what needs to change so that the sector can move beyond its current status as ‘the most male dominated sector’ in Australia,” she said.

But Galea warns these rigid practices have implications for all workers, not just women.

“They have a detrimental effect on the health and wellbeing of both male and female construction professionals, which undermines the sector's ability to attract and retain the best and brightest talent.

“The business case for gender diversity is hiring the best talent, so we can build the best cities, but at the moment the construction sector is only fishing from half the pond. Women have skills and expertise to contribute to the sector, too.”

Part of Galea’s PhD research has involved her shadowing construction professionals at two of Australia’s leading construction companies which are actively trying to close the gender gap.

“These companies are leading a charge for change and that’s encouraging but there are still varying degrees of acceptance across the sector,” she said.

Galea says the NAWIC scholarships will allow her to finance the completion of her PhD and attend international conferences focused on gender equity in male dominated environments.

Once she has completed her research Galea hopes to return to the construction industry and help lead the sector's gender equity transformation.

Inspiring panel shines a light on diversity in sport

Cardiology gender gap: less than 5 in 100 interventional cardiologists are women