This year may well prove to be a turning point in how humanitarian aid responds to crises, writes David Sanderson. 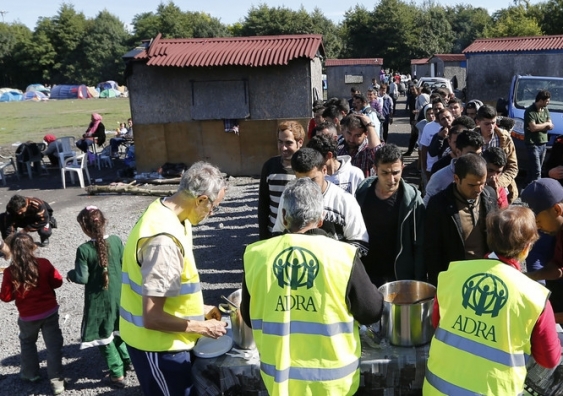 One of the benefits of a focus on resilience is the way it brings aid and development workers together. Reuters/Regis Duvignau

OPINION: 2016 may well prove to be a turning point in how humanitarian aid responds to crises. For one, the need is great. Forced migration from conflict is at its highest since the second world war; the number and scale of disasters triggered by natural hazards are increasing; and 2015 was the hottest year ever recorded.

The aid sector, largely unchanged in 75 years, is struggling to cope. The first-ever World Humanitarian Summit, convened in May to “rethink” aid, acknowledged a “woefully under-resourced humanitarian response” has to “do much more far better”.

To achieve this, some argue radical change is needed, because:

… the formal system faces a crisis of legitimacy, capacity and means.

At such a dramatic time, then, with burgeoning need and an aid system that is failing to cope, what meaning does “resilience” have?

Does a lack of agreed definition hamper efforts?

The word resilience is not new. It has been around (in English) since at least the early 17th century.

There are many competing definitions. One, from the International Federation of the Red Cross and Red Crescent Societies, defines resilience as:

… the ability of individuals, communities, organisations or countries exposed to disasters and crises and underlying vulnerabilities to anticipate, reduce the impact of, cope with, and recover from the effects of shocks and stresses without compromising their long-term prospects.

This understanding gives as much attention to what happens before a disaster (such as an earthquake or flood) as it does to the immediate aftermath of relief and recovery. If prepared for beforehand, the impact of disasters can be reduced, or even prevented altogether.

Critics of resilience argue, among other things, that the lack of a commonly agreed definition is a weakness. After all, resilience can trace its roots to engineering, psychology and ecology.

However, this misses the point. The chief benefit of resilience lies in its “good enough” understanding by a broad church of actors, and not in the detail. People get it, and can act in resilient ways.

The power to bring people together

A second benefit of resilience lies in its convening power.

Aid workers, donors, businesspeople and politicians are comfortable to stand alongside efforts that build resilience in ways they might not have done if the rallying cry was a rather more negatively toned “less vulnerability”. An example is the global 100 Resilient Cities initiative funded by the Rockefeller Foundation. Its central task is to mobilise political will for action within complex urban contexts.

The word “resilience” has positive connotations, certainly compared to the bleak language of disasters. Synonyms and related words for resilience include animation, adaptability and flexibility.

This matters, as how issues are framed is vital.

Resilience-thinking helps in a third, critical area: the aid sector has grappled with the development-disaster divide for decades.

The separation of long-term actions dealing with chronic problems such as poverty from the short-term response to acute events such as cyclones and tsunamis is seen by some as essential, and by others as a deep problem.

“Purist” humanitarian agencies argue that combining humanitarian action with developmental challenges – such as engaging in local politics – muddies the waters and can hamper the primary mission of responding with lifesaving actions.

However, the mainstream of aid thinking, for the past 20 years at least, has sought to bring these two sides closer together. The Grand Bargainbetween major donors and humanitarian agencies was launched at the World Humanitarian Summit in May this year. The agreement commits signatories to, among other things, “enhance engagement between development and humanitarian actors”.

Resilience-thinking helps to improve links between disasters and development in two ways.

Pre-disaster investments must now be taken more seriously to stem the steady increase in the number of crises.

Putting into practice effective resilience-based approaches lies in the domain of governance. At a policy level, decision-makers across the board – including governments, aid agencies and the private sector – need to take pre-crises actions more seriously.

Responsibility also lies within communities and civil society, where individuals and neighbourhoods need to be better prepared. Uniting around improved resilience provides a means to achieve this.

This article is based on chapter one, co-written by the author, of the IFRC 2016 World Disasters Report, Resilience: Saving Lives Today, Investing For Tomorrow. The report is being launched this week at events in London, Geneva, Dakar and Quito.

Professor David Sanderson is the Judith Neilson Chair in Architecture at UNSW.

How to improve recovery from urban crises

So coronavirus will change cities – will that include slums?