A future in which our bodies are used as hard drives could change the way we conceive of human history and perceive life, writes Julie Louise Bacon. 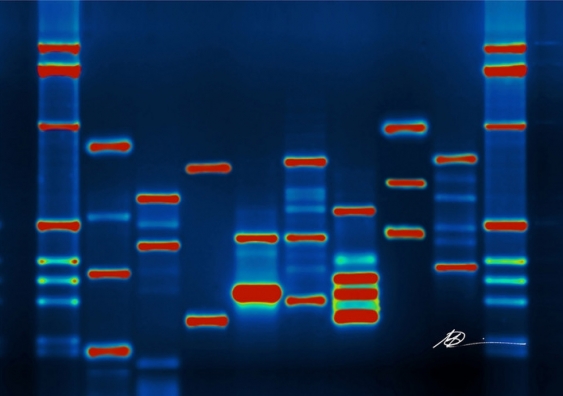 The GIF animation was generated from an iconic image series created in 1878 by the motion-picture pioneer Eadweard Muybridge.

The breakthrough involved the scientists translating image pixels into genetic code, which they fed to the cells one frame at a time. The bacteria incorporated and reproduced the sequence in their DNA, demonstrating the possibility of using living cells as information recording and storage devices.

The tech world was, predictably, agog. But beyond the hype, scientists’ goal of applying the technique to human cells has deep philosophical implications.

A future in which our bodies are used as hard drives could, in effect, change the entire way we conceive of human history and perceive life.

The origins of history

Today, it is impossible to imagine a world without history: from the vast array of chronicles housed in the world’s libraries to the countless traces of the past accumulating in the data farms that support the digital cloud, history surrounds us.

But it wasn’t always this way. Starting around 4000 BCE, the rise and spread of city-states, from Mesopotamia to Ancient Greece, radically changed the relationship between humans and our physical world.

New patterns of governance and information technology produced what’s now called “historical time”, a regime of truth based on evidence and analysis that’s codified in written documents and housed within the walls of archives. These new systems of authority gradually supplanted the sense of time that had previously defined the reality of ancient peoples: the seasons, oral traditions, myths and rituals.

With the onset of historical time, change no longer appeared cyclical. The concept of progress emerged, establishing a vision of humankind moving forward, shaping the world, building knowledge and recording evidence of this journey.

The city-state era ushered in a new era of timekeeping. Public domain

But, of course, the whole notion of progress depends on power. Someone (or more likely a certain subset of people) must select the perspectives that count as knowledge. Which events are memorialised and which disappear from history?

With the Age of Reason came a broad-based questioning of this power. In his 1784 essay “What is Enlightenment?”, Immanuel Kant argued the importance of challenging the authority and legitimacy of practices and norms that restrict the power to reason for oneself.

Soon after, in 1792, Mary Wollstonecraft published A Vindication of the Rights of Women. Her argument for the education and representation of women in civic life signalled the absence of female voices from history.

In the 18th century, Mary Wollstonecraft pointed out that history as the world knew it was the history of men, not women.

The book’s emancipatory message was, however, soon subsumed by new forces. The power to systematise reality expanded dramatically in the 19th century, with industrialisation, technological developments and the spread of the scientific method.

Photography brought a seeming realism to the documenting of history. Charles Darwin transformed our concept of the origins and timelines of the species and Sigmund Freud described how an individual’s past shapes their psyche.

These spectacular developments continued in the 20th century. Enabled by modern computing, scientists explored time at a cosmic scale (the theory of relativity) and explained life at a molecular level (the discovery of DNA).

In this great tide of change, some 180 years after Kant and Wollstonecraft, a wave of critical movements finally took history to task.

Among these critiques was Michel Foucault’s analysis of systems that regulate our physical body and mental states. From The Birth of the Clinic, his 1963 work on the rising authority of medical knowledge, to his 1975 publication on institutions that discipline society, Foucault studied the Western desire for total oversight, famously citing the Panopticon prison model.

From the critical vantage point, the impact of power – and of the technologies it employs to represent, monitor and control individuals and populations – becomes clear. Feminists spoke of the male gaze. Postcolonial theorists pointed to orientalism. And environmentalists have shown how human progress is destroying the physical world.

Hence the risks of this recent application of CRISPR: envisaging history as a biological resource rather than a space of social memory is a dramatic shift that leaves history open to radical new forms of exclusion and control.

The scientists’ interest in “molecular recording” in humans and the production of “cell historians” promises to take the management of life, time and the visual arena to new levels. In doing so, they raise the prospect of a Panopticon within.

Today, progress is increasingly defined by the power of digital technologies to integrate different aspects of human life and abolish the gaps between us. We’re told that social networks, big data and the digital world make us safer, more productive and connected.

But not everyone agrees. The sociologist Zygmunt Bauman argues that globalisation and the information economy makes for a liquid reality that fragments our attention span, dissolves relationships and produces cultural amnesia.

The Harvard team proposes an image of history that is not a record of culture – the ensemble of ways of living, transmitted across generations – but a sum of the material states of humans. This removes the record of social life that conditions how bodies live.

The scientists emphasise the technique’s use in modelling diseases and creating therapies. Those benefits may be real, but so too is what Foucault describes as biopower: the use of wide-ranging technologies to administer and dominate human life.

If scientists can embed information in living human cells and extract data, behaviour can be regulated at the deepest levels. Who will decide how the power of molecular recording is wielded, and who has access to the information?

The ways in which history is made, shared and accessed determine how its power operates and reality is produced. As we both subscribe to and are uploaded into the net of digital reality, the issue of control over data raises new questions of agency.

The fact that political and market interests drive the application of science in technology – with their stealthy logic of monitoring, expansion and profit – exacerbates questions of control.

As the Harvard team’s use of bacteria shows, we’ve come a long way since the single-cell, bacterium-like form that in all likelihood spawned the wonder of life on the planet today. Their gene-editing project demonstrates technology’s capacity to systematise time in new ways.

It epitomises the conditions of the Network Ages: the compression, acceleration and dispersion of life.

But as the richness of life and historical memory demonstrate, culture is more than information, and the diversity of life exceeds technological measure. Can we trust that scientific leaps will produce a future where diversity is supported and divergence is possible?​

To answer that question, we must do more than simply laud new technologies like CRISPR. We must examine how power can function commensurate with these techniques’ newly expanded reach.​

Dr Julie Louise Bacon is a Lecturer in Art, Curating and Cultural Theory at UNSW.