Opinion Adelaide Biennial: ‘contemporary art as it was meant to be’

The 2014 Adelaide Biennial is a tightly controlled, heart-wrenching, thoughtful critique of the change in Australian sensibility, and is well worth the price of an airfare to see it, writes Joanna Mendelssohn. 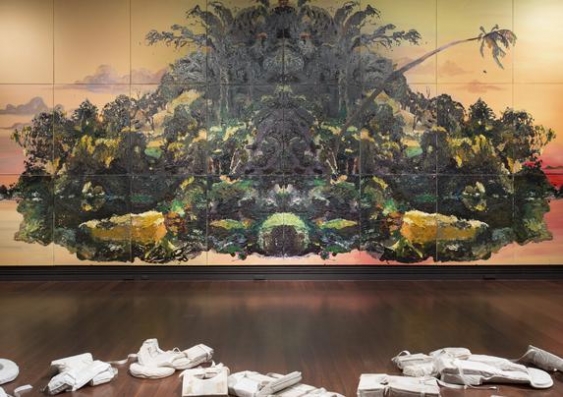 OPINION: This is the exhibition we have been waiting for.

This is contemporary art as it was meant to be – warning that we are experiencing the dark night of the national soul. The country that once thought of itself as open and generous and free has closed inwards and is now suffering the consequences of the terrible pragmatism of cruelty.

By any measure, The Art Gallery of South Australia’s director, Nick Mitzevitch has achieved a masterpiece at the 2014 Adelaide Biennial, appropriately titled Dark Heart. The Biennial is Australia’s only ongoing survey of contemporary Australian art, so it is an appropriate venue to examine the changing national psyche.

His concept is daring, and in a time of vindictive partisan politics, it could have been dangerous. But he has dared, and by limiting himself to 28 artists (with collaborators) he has delivered a tightly controlled, heart-wrenching, thoughtful critique of the change in Australian sensibility. One result of the strong curatorial direction is that many of the artists have produced their best work ever.

The result can at times be overwhelming.

Fiona Hall, who will be representing Australia at the 2015 Venice Biennale, has created Out of my tree, a bleak jeremiad on the consequences of the denial of reality.

In 1990, at the first Adelaide Biennial, she exhibited Paradisus terrestris, a delicate sardine tin-sized celebration of the sexual organs of homo sapiens and plant life. Now she presents a nightmare room and a mad world ruled by greed and folly. Here time itself condemns future generations to a wasteland.

Rosemary Laing has photographed the sites of the British nuclear tests that took place in central Australia six decades ago. The contamination of their land rendered it uninhabitable for the Tjarutja people. Laing has placed a republican verse by Thomas Keneally below the sign warning of radiation. This hangs with her 2009 work – a dozen useless actions for grieving blondes – to give a sense of the futility of it all.

Why do we poison the earth, fight the powerless, and kill the meek?

Ben Quilty has nailed it with The Island.

Gigantic, dark, brooding and menacing, a form emerges from a fiery sunset sea. Without knowing anything about the place, the viewer is threatened by its bleak intensity, the way its anthropomorphised dark centre turns into a hellmouth.

Quilty based his composition on an idyllic 19th-century Tasmanian pastoral landscape by Haughton Forrest. Perception is all, as this was also the site where, a few years before, Aboriginal people were massacred. Evil acts spring from fear – fear of the outsider, fear of the unknown.

At first The Island appears to dominate its gallery, but then the viewer realises it is hanging above the sculpture that should become one of this country’s great memorials for a war that was never fought against us.

Alex Seton’s work – Someone died trying to have a life like mine – honours the victims of this country’s cold hard heart.

Each one is different, but some form little sub-groups, families almost, filled with the ghosts of those we rejected. The round collars of the jackets quote halos, and one grouping could be a Quattrocento Madonna and child.

The jackets that have burst open could hold angels. Another almost quotes Michelangelo’s Dying Slave. The treatment of the marble replicates the slightly roughened texture of the canvas jackets, but Seton has also added little touches: celluloid film acts as a reflector, a futile attempt by the dead to find a rescuing light. A 20,000 rial (Iranian currency) note is inserted into one of the pockets.

This work references events that actually happened. In May 2013 28 empty life jackets were washed on a beach at the Cocos Islands. One had a small amount of Iranian money tucked into a pocket.

Technically this work is a tour de force, as 21st-century ideas meet ancient technologies. But such is the strength of Seton’s idea that it is the art that overwhelms, not his superb craftsmanship. Marble is a medium well suited to honour the dead. When young Australian soldiers started to die in the futile war in Aghanistan, Seton started to carve folded Australian flags to honour each soldier as he fell. There are now 40 flags which have been bought by the War Memorial and will form a part of Australia’s official Afghanistan memorial when it is unveiled later this year.

It is not just the selection of works but their placement that makes Dark Heart such an intelligent exhibition. Mitzevitch and his managing curator Lisa Slade understand that an exhibition is about making visual connections between the works as well as the content.

So after the bleakness of Seton and Quilty there is hope. Lynette Wallworth, Antony and the Martu women have collaborated in a major installation of painting, screen projections and song to give the rhythms of walking the country – as the women show the world how they gather, hunt and burn the land to nurture it and to sustain themselves – as people have done for tens of thousands of years.

Upstairs, between Fiona Hall’s bleak prophecy and Rosemary Laing’s lament for futility, a mass of spears points downwards from the ceiling, poised to descend on anyone standing below.

They come from Willy Kaika Burton’s Kulata Tjuta Project that has taught a new generation of Pitjantjatjara men the ancient crafts that enable people to survive in the desert.

And while Tony Garifalakis’ Mob Rule sees world leaders as masked gangsters, Tony Albert’s 108 takes a different view. His many small works provide a riff on stereotypical images of Aboriginality. On a platform in the centre of the room he has built a beautiful, whimsical series of houses of cards, all with messages. One reads:

I have decided to stick with love. Hate is too great a burden to bear.

Dark Heart is at the Art Gallery of South Australia until May 11. Even if you live elsewhere, it is well worth the price of the airfare to Adelaide. Go.