Analogue TV may be on the way out – but it’s been an involving medium for artists, writes John Gillies. 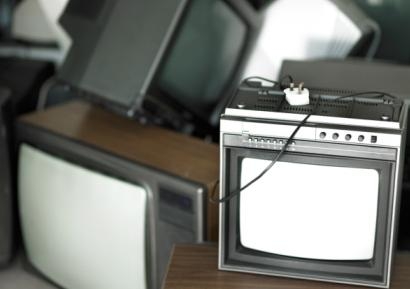 OPINION: 2013 will be remembered as the year analogue television was switched off in Australia. The curators of Tele Visions are celebrating the final days of analogue TV with a set of new and historically significant works interrogating the medium of television.

As of today, the five-day program of performances, screenings and talks on television at Sydney’s Carriageworks will be live-broadcast online and via short-range analogue TV broadcast.

If Tele Visions imagines what television might have been, there’s a long history of artists exploring the medium of live television.

Everywhere at once and in real time

Television’s great innovation was that it could be everywhere at once and in real-time. Broadcasting could be expanded sculpture, as Italian artist Lucio Fontana dreamed: as immaterial as electrons in space, made visible in flashes of light and constellations in time and space, connecting inner and outer worlds, forms and voids.

Television was different from the movies.

Fresh from directing coverage of the 1956 Melbourne Olympics, the resources of French state broadcaster Radiodiffusion-Télévision Française (RTF) were marshaled by director Jean-Christophe Averty to startling effect.

He turned the television studio into a site of performance, creating the modernist avant-garde drama of French poets Raymond Roussel, Jean Cocteau and Alfred Jarry. He embraced variety, jazz and pop music.

In our rationalised age it seems extraordinary that the French public broadcaster should allow a television director to become an auteur and create such masterpieces of television. Averty, a jazz pianist, had a musician’s sensibility and skill, which he mixed with the innovation of an electronic Georges Méliès.

No videotape or recorder for early Averty (it wasn’t invented yet). He used live multi-camera or sometimes film when the budget was larger. When videotape, and later colour, came along in the late 1960s he was quick to exploit those new mediums.

But the performers and their kinetic energy are always central to his work. The joy and dreams of children, and perversity and creativity of adults, mesh in an electronic theatre beamed across France.

Briefly alongside US Public Television’s Children’s Television Workshop that produced the long running Sesame Street, is WGBH’s New Television Workshop, for which artists were invited to work with the resources of the television station to produce videotapes for broadcast.

In Peter Campus’ Three Transitions (1973) (see below) the American artist creates formalist actions that illustrate a deep understanding of the architecture of the television studio.

Each piece uses two video cameras mixed to tape, or alternatively one live camera and one prerecorded camera on tape. The artist/ performer stands in the studio, demonstrating a simple action.

You can feel and hear the apparatus of the studio, the air conditioning, the dead space of the studio and the tension in the air as the crew goes for another take.

Forget its dated media utopianism, Global Groove is music video at its most hyperactive, not afraid to cut in the middle of a bar or word; not afraid to record video effects and synthesis in all their lurid psychedelic analog glory as performance – and not afraid to use television as the transmitter of human energy.

This lecture will be televised

Another form of television performance appears in the 70s and 80s in the form of the video essay or video lecture, for example in the work of French filmmaker Jean-Luc Godard, or his work in collaboration with Anne-Marie Miéville, or Joan Braderman for US cable program Paper Tiger TV.

In 1979 Australian midday television’s Mike Walsh Show featured European guests from the Biennale of Sydney, performance artists Marina Abramovic and Ulay. After a few tense questions, with a wink, wink and nudge nudge to the live studio audience and the viewers at home Walsh asked, “so what is this REALTIME you are talking about?"

Abramovic, expressionless, leaned forward from the low studio chair: “Realtime is … Well, if I pick up this glass of water …“, she says very slowly and deliberately in her strong Serbian accent.

She held the glass of water in her hand for a television moment, which seemed an eternity, then dropped it smashing onto the studio floor. The look on the host’s face changed and the director urgently cut to a commercial.

Their spokesperson sat mutely staring back into the camera and into the little bars and living rooms of the Republic. Television stops, time stops, space is continuous.

It’s almost like a vernacular reprise of British artist David Hall’s This is a Television Receiver (1976), commissioned for BBC2’s Arena Program, where a newsreader repeats nothing more than the line “this is a television receiver” over and over again.

Time disappears in Australia at the end of 2013 as the analogue television broadcasting signal is turned off; then flogged off to the highest bidder.

But Yvonne Speilmann in her 2008 book Video: the Reflexive Medium makes the perceptive call that video is neither analogue nor digital – it is flow and live and so video and television are still everywhere and in every possibility.

John Gillies is a Senior Lecturer and Head of Time Based Art at the School of Media Arts, COFA.